It might be good enough for fans of the film looking to walk in Constantine's shoes, but if you're simply looking for a good action game, you can do better.

Move over, Pat Benatar. Hell isn't just for children anymore. Now it's for children and...Keanu Reeves. The new movie Constantine casts Keanu in the lead role of John Constantine, a line-walking demon hunter who occasionally has to cross over into hell to get things done. The game is based on the movie, turning the experience into a very basic third-person shooter with a little spellcasting to mix things up. It might be good enough for fans of the film looking to walk in Constantine's shoes, but if you're simply looking for a good action game, you can do better.

Constantine follows the plot of the movie, though it usually cuts to the chase rather than setting up the story itself. You'll see some cutscenes that give you the basic premise, but the story doesn't really stand on its own. It's really meant as a companion piece to the movie. So to break it down to its simplest terms: You'll be fighting demons by shooting them with holy weapons.

One of the nice things about Constantine is its pacing. The game starts off with a bang by sending you directly to hell, where you'll do a little fighting before the game rolls a credit sequence. From there you'll get a few more pieces of the story before carrying on in the real world. Hell is used as an alternate plane, of sorts, for the purposes of puzzle-solving. Constantine can teleport himself to hell by standing in a puddle of water and spitting out a little Latin. This usually means you'll advance as far as you can in one realm, find a puddle of water, teleport to the other plane, and continue moving forward. Sometimes you'll have to move boxes in one world to navigate over obstacles in the other. This system's been used before for similar puzzles in games like Soul Reaver and The Legend of Zelda: Ocarina of Time. Constantine's version of this system feels a little dumbed-down, though, since anytime you see a puddle or a vial of water, it's a clear sign that it's time for a change of scenery.

The puzzle-solving aspects of Constantine really take a backseat to the run-and-gun action. The game is constantly throwing demons at you, and you have a few different ways to defeat them. The primary method is with projectile weaponry, like pistols, a nailgun, a holy shotgun, and so on. You'll also equip secondary weapons, like holy water. Furthermore, you'll have the ability to cast spells that can wipe out a handful of enemies, easily dispatch a possessed human, and so on. To cast spells, you'll first have to select which spell to cast with the D pad. Then you'll hit a button to cause the casting interface to come up. This will show you which buttons you need to hit to cast the spell. This builds in a little casting time, meaning you'll occasionally have to put some distance between you and your enemies. However, since the button presses are simple, and time slows way, way down when you start to cast, this rarely comes into play.

You'll use your weapons to fight a variety of demons. Most of these guys are straightforward. You just shoot them until they drop. But you'll also run into rooms full of possessed rats, as well as face off against possessed humans that require you to beat them up until the demons leave their bodies. Then you must shoot these demons before they can possess other corpses. Additionally, you'll encounter some boss fights. These boss fights are OK, but they're usually easy and are heavily reliant on simply learning a pattern and then sticking to it. The game repeats this same formula from start to finish, and while it's of a decent length, you're barely provided with enough incentive to finish it once, let alone go back for a second run.

Constantine has the look of a budget game. Graphically, the best part about it is the player model, which looks a fair amount like Keanu Reeves. The in-game model actually does a better job of presenting Constantine than the cutscenes do, though the cutscenes aren't too shabby. Hell also looks appropriately "hellish," with a constant reddish glow and plenty of exposed fire. It's just too bad the frame rate can't keep up with the rest of the game, though. This is a much larger problem on the PlayStation 2 than it is on the Xbox, but at times, Constantine seems like it's barely crawling along in single-digit frame-rate territory. This is, for lack of a better word, bad. It's also too bad, because the rest of the game looks pretty decent.

The sound in Constantine is about as good as you'd expect. It gets the job done with fairly basic gunshot effects and decent music, but that's about it. The voice acting is well done in some spots, but it's a little weak in others. Constantine sounds like he was voiced by two different Keanu Reeves soundalikes, one of whom actually sounds a lot like the real thing and one of whom sounds more like someone trying to do a funny impression of the real thing. The uneven nature of the voice work detracts from the game, overall.

Constantine works. It's generic in its design, the third-person shooting isn't anything you haven't seen before, and the spellcasting isn't interesting enough to set the game apart. As a result, Constantine would work much better as a budget offering. So if you're looking to spend $39.99 on an action game, there are better choices out there. 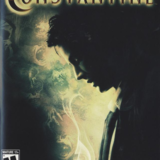