The premise of the game is gimmicky, but after its sordid skin is peeled away, a true gem of a 3D platformer is revealed.

Nintendo has come a long way since it refused to allow blood in the SNES version of Mortal Kombat. For better or worse, this sort of content decision has earned Nintendo the reputation as the Disney of the video game industry. While parents know they can trust Nintendo to provide good clean fun for their children, the spend-happy over-18 market has instead found solace in the PlayStation's wide selection of games intended for adults. Hoping that it's not too late to change public perception, the Nintendo 64 now features the most boundary-pushing piece of software ever to hit a video game console: Conker's Bad Fur Day.

Conker is a squirrel that looks just like any other character from previous Nintendo games. But underneath his cordial exterior lies a trash-mouthed rodent with a penchant for booze, wild women, and lewd conduct. Conker's twisted tale begins at his local bar, where he tosses back a few too many drinks with his war-bound friends before stumbling out into the rainy night. Drunken, confused, and vomiting profusely, Conker becomes lost and eventually blacks out. When he comes to his senses, he finds himself in a world unlike he, or anyone else for that matter, has ever seen before--a world full of gutter-mouthed cogs, LSD-dropping demons, bosses with giant testicles, and a panther king that rules minions of seemingly inept weasels. It's a demented world, and Conker's only desire is to somehow escape and catch up with his girlfriend, Berri. While little more than just a setup for the game's content, the story makes no sense until the end of the game, when several plot twists help to explain things a bit.

In the early going, Conker's BFD indulges heavily in lurid situations that provide some genuine belly laughs. Throughout the course of the game, you'll see an opera-singing boss made entirely out of crap, graphic depictions of morose scenarios (like a firing squad), and furry creatures being ripped in half or blown to bits. At first, it all seems surreal. After the initial shock wears off, the humor becomes contrived at times. Nonetheless, Conker's BFD is like a good book. You can't wait to turn the page and find out what happens next. Blood, guts, feces, and swearing dominate the subject matter, and the game's design is targeted squarely at adults as well as children. Instead of having to collect exorbitant amounts of items and figure out where to use them, context-sensitive pads give them to you when you need them. Standing on the pads and pressing the B-button awards Conker with one-use items, special costumes, and extra abilities. Although you may meander virtually anywhere you choose, the game progresses in a linear fashion.

Another one of the game's aspects, which will appeal to the older crowd, is the dead-on movie spoofs that pop up with alarming regularity. One portion mimics the opening scene of Saving Private Ryan right down to the soldier-looking-for-his-arm bit. Scenes from The Terminator, The Godfather, The Matrix, and many more also get the Conker treatment. While it's really nothing new for the genre, the gameplay variety in Conker's BFD is excellent. In addition to the traditional jump, climb, swim, fly, and attack staples of 3D platformers, there are first-person shooting levels, racing levels, some simple puzzle elements, and plenty of minigames. The game reveals its heritage through some of the objectives, like carrying objects through gauntlets, which would be right at home in Banjo-Tooie. The platforming elements can be difficult at times thanks to a stubborn camera, but the majority of problems come from figuring out what to do instead of actually doing it. When compared with games like Banjo-Tooie, the linearity of Conker's BFD cuts its length considerably.

After the one-player mode is completed, there are seven multiplayer modes to explore for up to four players. Along with several forms of third-person deathmatch with a healthy arsenal, the tanks mode lets players blow each other to bits while they attempt to capture and detonate a bomb. The stereotypical race mode provides two variations of the same course for kart racing mayhem while the cool but dull raptor mode splits players into two teams. One team must try to steal dinosaur eggs from the raptors while the raptors attempt to stop them. In the frenetic heist mode, all four players play as armed weasels attempting to obtain a lone sack of money. The beach mode is the most fun of all the multiplayer modes. One team must storm the beach while the other team defends the beach with gun towers. While the extra modes do add some longevity to Conker's BFD, the majority of them fail to stand the test of time.

Rare pulls every graphical trick out of its book for Conker's BFD. It makes other Nintendo 64 games look like 16-bit software. From the incredible multicolored real-time lighting that illuminates each area to the real-time shadow that mocks Conker's every step, Rare's final Nintendo 64 game is the console's most visually impressive. The game contains almost two hours of real-time cinemas, with fully animated character faces that mimic streaming dialogue with precise detail. Conker's limitless facial expressions accurately convey the rodent's feelings on the fly whether he's determined, sad, or angry. The levels are enormous and never suffer from draw-in--no matter how far away the horizon may be. While the texture work is mediocre in the early areas, it gradually improves as you keep playing. Conker's BFD pushes the N64 to its graphical limit. This becomes painfully obvious when the frame rates bog down while you enter outdoor areas. If you were able to tolerate it in Perfect Dark and Banjo-Tooie, Conker's BFD's dodgy frame rates won't be a problem. Another issue is a stubborn camera, which sometimes gets caught on objects or refuses to obey commands.

The audio in Conker's BFD matches the high standards set by its graphics. The Dolby Surround Sound provides rumbling bass and ear-piercing highs. There are literally dozens of sounds just for Conker's footsteps. Whether he's running on carpet, wood, concrete, metal grating, or dung, the sounds emitted make the surface immediately recognizable without the need for visual clues. The profanity-riddled voice acting brings the entire game together. Some of the more ambitious phrases are bleeped out, but it's never too difficult to decipher what's really being said. The writing can be extremely clever at times, but the voice acting develops the characters more than anything else. As with all its previous Nintendo 64 games, Rare has included an interactive soundtrack that gradually mutates as you move from one area to the next. The songs are catchy, and some feature farting noises played at different octaves for that BFD touch. In all, the sound doesn't get any better than this on the Nintendo 64.

While it's far too late in the game to revitalize interest in the Nintendo 64 among adults, Conker's Bad Fur Day gives third-party publishers the green light to do whatever they like on the GameCube. The premise of the game is gimmicky, but after its sordid skin is peeled away, a true gem of a 3D platformer is revealed. The pacing is perfect, the gameplay is varied and predominantly tight, and technically, it has no match on the Nintendo 64. The main drawback is the game's relatively short length. It comes to an end rather quickly, and most will be able to finish it during a solid weekend of playing. While it lasts, Conker's Bad Fur Day is a wild ride well worth taking.

View Comments (6)
Back To Top
9.3
Superb
About GameSpot Reviews 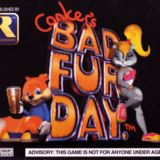