Like the previous games in the series, Global Terror offers some redeeming value as a shooter, but poor execution on certain aspects, such as the AI, keeps the game from distinguishing itself.

Stop us if you've heard this one before. Conflict: Global Terror is a tactical shooter that puts you in control of a four-man squad of commandos as they fight against terrorists in various locales across the globe. OK, there may be a lot of games like it on the market, but consumers can't seem to get enough of tactical shooting, so you can't fault publishers for making them. In fact, Global Terror is actually the fourth game in a long-running series of similar shooters from Pivotal Games. And like the previous games in the series, Global Terror offers some redeeming value as a shooter, but poor execution on certain aspects, such as the artificial intelligence, keeps the game from distinguishing itself.

Conflict: Global Terror's single-player campaign involves a lengthy, 14-mission campaign that will take you all around the globe, from steamy South American jungles to snowy Himalayan mountain passes, on over to the streets of South Korea. Each mission takes place on a fairly large map, and you'll need to complete a series of objectives (that often change midmission) in order to complete the level. Each mission can take quite a while to complete, but the size of the level is only part of the reason why. One issue is that the game doesn't include autosave checkpoints. You're given a limited number of save games per mission, and you'll need to use these judiciously. The problem is that you don't know how each mission is going to play out ahead of time--so you may end up holding onto your save-game chances for too long, and put yourself in a bad position later in a mission because you're running low on ammunition or health packs. Conversely, if you use up all your save games up front, you may find yourself wishing you saved one or two when some unforeseen tough spots come up at the tail end of a long mission. This type of guessing game can result in a number of extra mission restarts, making the game a little more frustrating than it needs to be.

There are other aspects of the single-player game that are frustrating as well. Your teammate AI can be rather wasteful of ammunition when you have them free to fire at will. In some missions, you can find them quickly resorting to pistols or grenades because they've wasted away their ammo, like a trust-fund baby goes through money. You can "solve" this problem by toggling to hold fire, but of course that keeps them from doing their job, which is to kill the enemy. Enemy AI isn't particularly smart, either. Whenever they're aware of your presence, they tend to charge at you in waves. While this gives the game a fun, frantic feel at times, it also renders a lot of the squad control mechanics useless; it's more effective to spend your time shooting at enemies than fiddling with the somewhat convoluted game controls. As mentioned earlier, you do have the ability to issue orders to your squad, such as hold position and follow, or fire at will and hold fire. There are more advanced commands as well, such as the ability to give delayed orders, which will be executed later when you give the go code. But given the pace of the game, you won't find much use for those. Switching between standing, kneeling, and prone positions can be a bit of an adventure as well, since it's mapped to a single button. The game can sometimes misinterpret a tap of the button for a kneel as a command for prone instead. You'll also notice that your soldiers don't always keep their weapons at the ready. For some odd reason, if you move around a lot without firing for a while, your commando will inexplicably drop his weapon from a ready position. This results in an extra second for him to raise his weapon and fire the next time you try to shoot, which becomes really annoying when you turn a corner and find yourself face to face with a terrorist and he gets the first shot off.

What the game does do well is let you switch control quickly between the different members of your squad. Amazingly, it's actually easier to switch between squad members than it is to switch weapons and fire modes on an individual operative. Though each commando is supposedly a specialist in certain types of weapons, this doesn't have an appreciable effect on the gameplay. The point is that in some situations you need a rifle, a silenced submachine gun, a heavy machine gun, or a sniper rifle. You can think of the different operatives more or less as different weapons for different situations and swap between them accordingly. And since you need to keep all of your squad members alive at all times anyway, you're never without the right tool--although if you leave them on "fire at will" too long, as we mentioned before, they may go through all of their ammunition. Thankfully, you have the ability to pick up dropped weapons, and there are usually a generous number of weapon caches and health packs lying around for you to grab if you need them. The missions themselves are a highlight of Conflict Global Terror's campaign; they do a good job of mixing up your objectives as you blow up roadblocks, escort VIPs, capture key enemies, and of course, shoot up a lot of bad guys. Slightly better balancing with the AI and a true checkpoint system would have been welcome, but as it is, there's still a fair amount of entertainment to be had with the game.

If you have friends, you can play four-player cooperative split-screen on the consoles, or over LAN on the PC, which makes the game marginally more fun and interesting. You certainly don't have to worry about teammates wasting ammo anymore, unless, of course, your buddies are as wantonly trigger-happy as the AI. Even if you don't have any friends, you can still play cooperatively or competitively online with either version. This works well enough, when you can find people online to play against. Unfortunately, the competitive mode is pretty standard deathmatch fare, and is limited to four players.

The presentation values in the game are decent, but they're nothing to get overly excited about. The character models exhibit a fair amount of detail and animate decently. But you'll notice an excessive amount of fogging if you try to look into the distance, which limits the effectiveness of scoped weapons. At least the variety of settings you play through keeps the game looking somewhat interesting. Sound effects, on the other hand, are particularly limp. There's no oomph to any of the weapon effects; voices sound muffled all the time; and on occasion, the Xbox version of the game has the sound cut out entirely. The music in the game is also subpar--especially the menu music, which is about as cheesy as the soundtrack of a '70s-era B movie. There are some cutscenes to move the story along, but these aren't particularly noteworthy or enjoyable to watch.

Conflict: Global Terror has some of the ingredients to be a good shooter. A lengthy and varied campaign, intricate squad commands, and a squad control system that's easy to use are all part of the game's strengths. Unfortunately, weak AI and some frustrating aspects about the interface and game balancing keep it from being a real contender in a crowded genre. The game should still appeal to longtime fans of the series, or those who just can't get enough squad-based shooting. 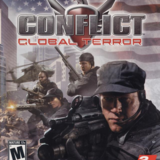 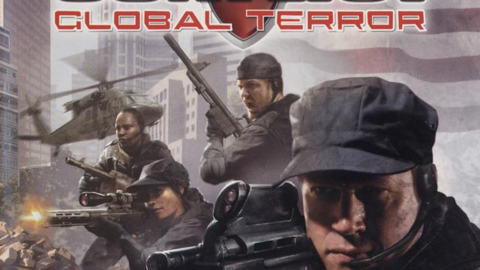 In Conflict: Global Terror, you can try to recover a team member who has gone MIA at the hands of the terrorist organization March 33. You join a five man counter-terrorism team dispatched to stop the terrorists from creating a new world order.