Conflict: Denied Ops is a little dumb and a lot dated, yet it's surprisingly enjoyable if you're into retro shooters with lots of kabooms.

For the fifth game in a series, Conflict: Denied Ops sure doesn't show any signs of evolution. This might actually be the simplest edition of the shooter franchise that developer Pivotal Games has produced, with gameplay so out of date that it might as well be wearing a plaid flannel shirt and listening to Alice in Chains. But even though the action is a good decade behind the times, the game's rapid-fire pace blurs the fact that you're shooting the same bad guys over and over again. Attractive visuals feature diverse terrain spread all over the globe. Co-operative play is another highlight, which earns the game some applause all by itself, given how this shooter feature is so often asked for and so rarely delivered. So even though nothing here is going to slow down traffic--let alone stop it--such a speedy mindless shooter like this is ideal for those moments when you want to switch off the synapses and play Rambo for a few hours.

As with the four previous games in the franchise, the theme here is military. The gameplay is stuck in the neutral zone between one-bullet-and-you're-dead hardcore shooters and the more absurd stuff where you can soak up lead like a sponge before meeting your maker. The story in the campaign is typical to these middle-of-the-road shooters, with you taking charge of a pair of special forces operatives working behind the scenes in 10 missions spread across the globe to unravel a nuclear arms conspiracy. Perspective has been switched to first-person from third-person, however, and your squad cut back to two commandos from the four featured in previous Conflict games. These changes don't make a great deal of difference to how the game plays. Being able to switch between sniper Graves and heavy gunner Lang is actually so seamless that you might as well be playing a single character.

That said, teamwork can be a key component of Conflict: Denied Ops. Your buddy can be ordered around and healed with quick clicks of the right mouse button. The smart artificial intelligence adeptly handles firefights as well. Storming enemy-occupied rooms, for example, is a snap. Just send Lang up to the doorway where he'll automatically lay down suppressing fire while you sit back and shoot survivors with Graves' scoped sniper rifle. No muss, no fuss. You can always count on your comrade to kill a fair number of enemies if positioned correctly and even assign him to take out level bosses like combat helicopters. The only problem here is that your squadmate takes orders too seriously. He typically won't yield the position you've ordered him to assume even if you're trying to get past him, causing congestion in tight corridors until you issue a new movement command. And you have to be careful when directing your pal when he's at the wheel of the hovercrafts or other drivable vehicles in the game because he is more than happy to roll right over you if you get between him and his assigned destination.

Other than the smooth-and-simple buddy stuff, there isn't much here out of the ordinary. Level design is the very definition of routine, although the campaign is jazzed up somewhat with the ability to choose the order in which you handle some assignments. The graphics are detailed and attractive, with the missions featuring varied scenery. These represent such diverse locales as the Venezuelan countryside, a Siberian castle, an icy Russian whaling depot, and the dusty streets of a Rwandan city. However, goals are never more involved than shooting everybody you see and blowing things up. You occasionally steal data from computers and set explosive charges, but generally this is a point A-point B expedition.

At least the pace keeps the proceedings from getting too dull. Even though you're repeatedly gunning down the same thugs and soldiers, you do so at a pretty fast clip. This isn't Serious Sam or anything, but the speed is zippy enough to keep you from feeling bogged down in endless enemies or eternally difficult choke points (although there are quite a few of the latter spread throughout the game's levels). Further excitement is provided by being able to blow up damn near everything. Levels are strewn with barrels, gas cans, and propane tanks ready to go boom at single shot. It also seems like you can't turn around without running into some catastrophic incident, such as a helicopter exploding in your face.

Multiplayer is another plus. A co-operative mode lets you play through the solo campaign with a friend over LAN or the Internet. Because so few shooters offer this feature these days, it's awfully welcome here, even in such a simplistic game. The other multiplayer modes are generic takes on deathmatch, team deathmatch, and conquest, though, so there isn't much here beyond the co-op. And even that is somewhat iffy because there appeared to be very few people playing the game online at the time of writing.

Poor audio quality is another drawback. Environmental effects are way over the top, particularly for voices. Talking in even a small, office-sized chamber is enhanced so that it sounds like the words are booming out across a canyon. Too bad there isn't any way to turn off or at least turn down this echo effect. At least this problem doesn't ruin any great scripting. Dialogue here is confined to awful buddy-movie stereotypes, with Graves being the grizzled veteran who's gruff but lovable and Lang being the cocky youngster who adds "motherf***er" to the end of every sentence. Music is just as obnoxious and so loud on the default setting that it almost drowns out machine-gun fire.

If you go in with low expectations and an appreciation for simple retro shooters, you won't be disappointed with Conflict: Denied Ops. It isn't a great shooter by any means, although it is a competent one for those of you who don't want a lot of interaction or thinking to interfere with senseless mayhem. 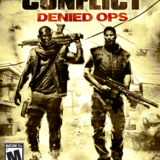