If I had three wishes I'd wish for more genies.

Restoring the place which harbors your fondest childhood memories is a cute and almost noble goal. In Concrete Genie you get to take something drab and dead and bring it back to life with colour, love, and warmth. It's a very simple and short experience that focuses mainly on light puzzling, 3D platforming, and a little stealth, but its charm and general sense of playfulness really make it a worthwhile adventure.

In Concrete Genie you play as Ash, a boy who dreams of bringing his former home, a fishing port called Denksa, back to life. The town has been corrupted by an oil spill and negative emotions, and is now a desolate maze-like neighbourhood by the water. Ash's love of art and memories of better days draw him to the run-down area, despite his parents' warnings. Unfortunately for Ash, his bullies also enjoy running amok in the ghost town; they tear up his art book and push him into a cable car bound for Denska lighthouse (known for housing a ghost), starting him on a new journey.

Small drawings of the genies Ash drew as a child are scattered around the city and, when combined with the power of the lighthouse ghost, bring his paintings to life. These friendly genies bid him to use his artistic talents to paint the town using a new magic brush, which restores the electric lights in the area. He sets to work, using his vibrant artworks to push back the darkness infecting the town. The premise doesn't make a tonne of sense, but its message and execution are sweet and full of heart, much like the rest of the game.

Ash is determined to restore Denska to its former glory and each area of the town, including the lighthouse, has hanging fairy lights over some parts of buildings. Painting these areas will clear the dark vines that block your path to the next section. Mechanically, painting is more like placing large dynamic stickers rather than using your own brush strokes. You choose whether you want to paint something like a rainbow or a flower, use either motion controls or the right stick to choose its location, then drag across the screen to determine the general size and shape of the object.

Concrete Genie fills in the rest, adding fine details that can vary depending on the sticker. Flowers may create extra grass, and trees can grow additional branches, but it all works to make whatever you're creating far more impressive. The artwork is made of light and genuinely quite beautiful--if a little overbearingly bright at times. Much like projected light art or bright neon signs, they work well in moderation but can get overly busy. You do have to go quite overboard to create something that's actually ugly, which makes the act of painting the town really satisfying--you get to watch a boring dull environment become something quite pretty with very minimal effort.

To light up the hanging lights, any painting will do. This means that sometimes, for simplicity's sake, I used the same art over and over again, covering the walls with butterflies or stars out of laziness. Occasionally, you may need to paint something specific, but even then it can get a little repetitive. All of the paintable objects come from your sketchbook the aforementioned bullies tore apart, and these pages are scattered all over Denska.

Sometimes you might not have the page you need yet, but setting out to find them gives you a genuine reason to explore the environment and fortunately, it's really fun to do so. Ash is just a kid and doesn't have superpowers, so he can't jump particularly high or survive large falls, but he does have a spirited spring in his step. Clambering up the sides of buildings is quick and efficient while still feeling grounded and not at all floaty. Even if you do fall to your death, you're immediately returned to where you fell from, and daredevil actions like sliding down power lines make getting around enjoyable without fear of punishment. There's a really nice fluidity to his movements, which emboldens you to explore every nook and cranny to hunt down your strewn pages.

Along the way, you'll also find spots to create new genies, which will in turn help you solve puzzles and access new areas. These genies have set colours which allow them to solve different elemental puzzles--red genies can burn down a tarp, for example, whereas blue ones can blow on specific objects, and yellow ones generate electricity to power various doors and switches. The downside to the puzzles is calling one genie to solve a problem calls all who are available to come, so often there's not much active work on your part to solve them--Instead, the genies come along and, aside from a few exceptions, they'll just solve it on their own. As genies are still technically paintings that exist on the walls they were painted on, they can only travel on connected walls and are locked in their own areas. This means you may need to have found the painting spot for the type of genie you need first, but this still isn't very difficult.

You also have a fair amount of control over how your genies will look, depending on how many genie design pages you’ve collected. The choices you make can impact their personalities, which can make interacting with them incredibly endearing--it's also very easy to make some hot mess genies, but they don't seem to mind their appearance. The interactions between Ash and the genies are very sweet--you can hang out with them, play games together, and paint things for them. Keeping your genies happy also makes them more likely to help you solve puzzles and provides you with Super Paint, which is required to paint over some surfaces, so the whole interaction with the genies feeds back into the positivity of the game.

Concrete Genie takes a surprising turn in the final act, when combat suddenly makes an appearance. As a part of the narrative, it makes sense and is an enjoyable twist, but because it's such a short-lived mechanic it feels under-developed. Like the elements of the genies, you are granted three different elemental attacks that need to be used to take down different shields. The half-hour dedicated to combat, mostly involving boss fights, doesn't give much opportunity for you to experiment with it. I'm still not sure if all the attacks did damage or whether some just caused status effects because there wasn't enough time or enemies to organically work it out.

When you're granted combat, you also gain new movement abilities, which include paint skating. This means you no longer have to run so much and can instead essentially skate on magical painted shoes. It makes getting around even more fluid than it was before, and unlike your ability to shoot elements, you get to keep this one even after the main story is completed. Because it's introduced fairly late into the game, it makes jumping back in after the story to clean up collectibles really enjoyable. The game itself only takes about six hours to complete on an initial playthrough, and once it's "over" you really do want to play more. But even with the 10 or so hours I spent finding all the secrets and collectibles, it still feels like some concepts could still have been explored to a greater degree.

Most of what Concrete Genie has to offer is fun and beautiful in a sort of childlike way. The game is not particularly difficult, and overcoming a puzzle or combat scenario isn't always satisfying. But it's ultimately still an endearing experience throughout. There's plenty of enjoyment to be found just from the act of exploring, and little hidden secrets along the way help make it worthwhile; I just wish Concrete Genie had more adventure waiting for me. 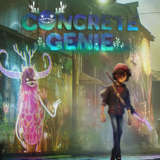 Hope dabbles in art herself but much to her disappointment, none of it has ever come to life. She spent close to 19 hours in game, completing two playthroughs and mopping up all the collectibles making her the proud owner of the platinum trophy. Review code was provided by the publisher. 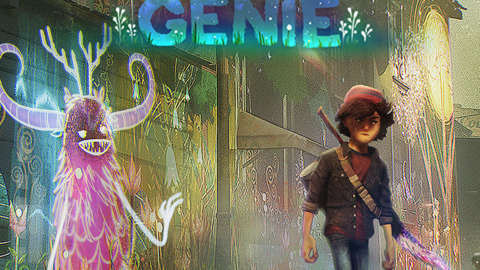 Concrete Genie is a game about a bullied teenager named Ash, who escapes his troubles by painting spectacular living landscapes and mischievous creatures throughout his abandoned hometown of Denska.