Derivative as it is, Conan is still a viscerally satisfying adventure.

There might not be a direct connection, but it's hard to imagine the God of War series existing as it does without Conan the Barbarian preceding it. At their hearts, both are brutally violent and dark tales of swords and sorcery, so it's not entirely surprising that developer Nihilistic has taken extensive inspiration from God of War in developing a game based on Robert E. Howard's iconic adventurer. Conan neither goes as big nor has the same high shine as God of War, but its graphic carnage still packs a real visceral punch. In a way, the game's unapologetically lowbrow take on D&D fantasy enhances the experience.

The game opens up with Conan, voiced here by a decidedly unbarbaric-sounding Ron Perlman, out on an adventure, battling marauding specters on a remote island while in search of a valuable gem. What he finds instead is the tomb of a dark sorcerer named Graven, which Conan accidentally opens. In his exodus from his magical prison, Graven strips Conan of his armor and leaves the Cimmerian warrior for dead. When Conan washes up on the shore of another island, he meets up with a smart and steely warrior queen with a vested interest in finding Graven and recovering Conan's armor. And so the two team up, fighting their way through legions of pirates, the Stygian army, an elephant demon cult, vicious beasts both real and mythical, and more supernatural forces in their hunt for Graven. The story, which is told as though it were an ancient campfire legend, isn't terribly weighty, even though at one point you're essentially tasked with saving the world. Still, it does a good job of establishing the primal and lawless feel of the land of Hyboria.

Conan, both the character and the game, is all about a good fight. You'll spend most of the game taking on small groups of enemies as you work your way through island jungles, devastated cities, dank caves, snowy mountain fortresses, and more. Conan has a light and a strong attack, and he can string these attacks together into a number of different combos, many of which culminate in a beheading, dismemberment, or a disemboweling. Though Conan starts off with just a single sword, he can recover weapons from felled enemies, and his fighting style changes depending on what he has equipped. A sword and a shield provides a nice balance of offensive and defensive abilities, while dual-wielding swords allows for fast, close-quarters attacks, and large weapons like broadswords and staves provide powerful and far-reaching attacks, though at the cost of speed.

Though the look of the weapons changes as you travel to different locations, the weapons from the start of the game are no different from those at the end, so it all comes down to your ability to wield them. As you kill enemies, smash treasure chests, and rescue topless maidens, you'll earn orbs that can be spent on more powerful combos. These combos are always specific to one of the different weapon styles, putting the decision to you as to how you want to allocate your orbs, and ultimately, which fighting style you're going to favor, though there's an argument for spreading it out, as you'll find different enemies to be more susceptible to specific attacks with specific weapons. Your enemies' ability to block incoming attacks, and the different combinations of enemies you'll face, are a big part of what makes Conan a fairly challenging game. Conan can also block incoming attacks, and if you block an attack right before it hits, you'll perform a parry, which creates a short window where you can execute a brutally choreographed finishing move. Some attacks are unblockable, though, and in those situations it's better to use the right analog stick to perform a rolling dodge maneuver.

As Conan recovers pieces of his armor through a series of huge, bloody boss fights, he gains a number of magical powers, something that Conan isn't particularly thrilled about, though he appreciates them as means to an end. At first you can turn enemies into stone for a brief period of time, and eventually you're able to call down a rain of fire from the sky, a murder of crows, and more. The magical energy needed for these attacks is fairly scarce, making these magical attacks most valuable when you find yourself simply overwhelmed--which, as you progress, can become more and more frequent.

What makes the combat so satisfying is how barbaric it is. When Conan gets shot with an arrow, he yanks it out of his hide with his bare hand. When he comes upon a treasure chest, he doesn't open it daintily; he kicks it in with the heel of his boot. In a pinch, Conan can chuck barrels, crates, or even one of his own weapons at distant foes. The game is also fabulously inventive with the savage mutilation of your enemies. One of the most basic dual-wielding moves you learn is a series of downward strikes with both swords, which can shear off both of an enemy's arms at the shoulders, leaving them to stand there screaming as blood sprays out of them until they finally collapse--and it only gets better from there. As Conan becomes more powerful over the course of the game, attacks that would simply drop enemies to the floor turn them into exploding sacks of wet viscera. It's telling that along with total playtime and the number of enemies you've killed, the status screen at the end of each level also provides a running tally of dismemberments.

Breaking up the wonderful gore are some light puzzle-solving and the occasional acrobatic sequence, and it's in these areas that Conan stumbles. The puzzles are never terribly complicated, but they can be unclear, and on a few occasions you'll still find yourself wandering around after you've cleared out all the enemies, trying to figure out what you need to push over or break in order to advance. As nimble as Conan can be in combat, this doesn't translate to his ability to leap chasms and climb up ledges; these sequences, while usually brief, are almost always kind of clunky.

The game's presentation can also be a little uneven. All of the combat animations and gore effects look fantastic, and the game uses some nicely layered lighting effects to give the world some depth. But upon close inspection, nearly all of the textures have a jagged, pixelated look to them, something that's especially noticeable during cutscenes. Same goes for the sound. Ron Perlman doesn't quite fit as Conan, the topless damsels in distress sound more like corny strippers, and you'll hear a lot of quips from both him and your enemies repeated. On the plus side, the pounding orchestral soundtrack has a wonderfully primitive, battle-march feel to it that really enhances the overall experience. These characteristics are the same in both the Xbox 360 and PlayStation 3 versions of Conan.

Perhaps the biggest mark against Conan is its length. At around six hours, it's a pretty brief adventure. But a good deal of craft went into making all of the game's over-the-top violence look so great, and it's the kind of guilty pleasure you'll want to savor. 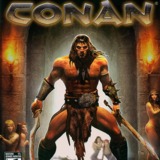 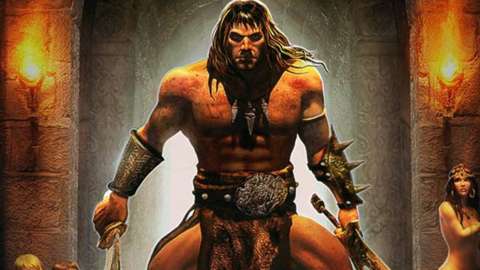