If any game offers the chance to understand just how impossible the heroic events of war movies would be to accomplish, Commandos 3 is it.

You'd expect larger-than-life adventures from a squad of superhuman World War II commandos, and Commandos 3 delivers: Central Berlin, a bombed-out Stalingrad, a train packed with stolen art masterpieces, and the beaches of Normandy are all on the menu. There's nothing pedestrian about such assignments, and all 10 mission locations are as tough as they are memorable. Given that you can't adjust the level of difficulty, getting through even a single mission can require as much patience and judicious use of quicksaves as it does stealth and tactical forethought. Unfortunately, Commandos 3 hasn't gained much ground on its predecessors, and those new to the series may have trouble getting past the interface, the locked 800x600 resolution, or the many moments of frustration that every player is bound to experience. Nevertheless, the game's high level of challenge can lead to some proportionally satisfying victories against all odds.

In total contrast with what lies ahead, Commandos 3 starts out easy enough. The two tutorial missions are--with a single exception--a smart introduction to the key members of the commando squad and their highly specialized abilities. As in Commandos 2, the interiors of buildings are fully 3D, and it's possible to smoothly rotate the camera with the mousewheel. While the 3D segment isn't the best-looking part of the game, this extra control makes it fairly convenient to navigate the cramped rooms. The starter scenario gently walks you through the basics of the interface, which differs significantly in style from those in typical strategy or action games. Except when manually set to provide cover fire, the commandos don't act without explicit commands. Moving one character at a time is simple enough, though the lack of hotkeys for specific weapons or abilities becomes a challenge in tight spots. The tutorial's one notable failing is that it doesn't mention that the abilities menu hides choices until it's clicked on, like the one for weapons, which confused more than one of us when looking for the spy's "distract" ability.

The prologue is a taste of how, with one mouse click, the Green Beret's speed and deadly knife strike can be overwhelming in close quarters. And within the span of 15 minutes or so, you'll meet the other core commando members (whose ranks have been distilled from Commandos 2 to the core group): The sniper has the longest range of any friendly unit, the sapper is an expert with bombs and heavy weapons, the spy can disguise himself with the uniforms of German soldiers and officers, and the thief is fast and capable of climbing up walls and other objects. The sixth member, the diver, appears only once, in the third campaign. One advantage of having the number of commandos pared down from the previous game is that there's no getting confused about what each one is for, and if you ever get really stumped in a mission, solving the situation can be just a matter of stepping back and thinking about the special abilities of the commandos assigned to a specific scenario.

This is a World War II game, and it's presumed that you know the odds the Allies are up against and have seen the character types in war movies, so don't expect a drawn-out story. The three campaigns kick off with a summary voice-over briefing, and most missions feature a little character banter in in-engine shots, but otherwise, it's time for the action. Fortunately, the missions themselves are quite distinct, and there are a couple of unexpected events over the course of the first two campaigns. While most maps require you to complete just one set of objectives, the two very large maps in the first campaign are broken up into a series of segments. One of the game's several cinematics occurs after the first short sniper-hunting mission: An intense round of bombing levels several buildings, then waves of paratroopers descend near your location. These flashy sequences are impressive and set the stakes, but it's typical of the game's uneven pacing that all this flash precedes a stretch of slow going and that some of the best parts are buried in the middle of the campaigns, where impatient gamers may not see them.

While there's more than enough opportunity to show off your stealth skills, Commandos 3 has more than a few situations where the object is simply to kill all the enemies on the map. This isn't as simple or as straightforward as it might sound, though, given that the interface isn't designed to let your men run and gun. Without much ado, the second mission offers some do-or-die training on the combat system, sending handfuls of assault-rifle-toting Germans at you in waves. To the game's credit, there's rarely just one way through a combat situation, and there's the chance to get some really heavy firepower. The beefy Green Beret can pick up an emplaced machine gun and walk around mowing down enemies within a medium-range cone, and it's even possible to use an artillery piece. For some reason, the commandos usually only pack their specialized weapons, but looting downed Germans provides the opportunity to get some decent small arms and set up ambushes.

Although nearly half the missions are combat heavy, Commandos 3's interface is better suited for stealth than combat. Only with cover mode turned on will a unit fire by itself, so defensive ambushes are really all that the unit AI can manage unattended. Even then it's essential to be quite careful in lying prone behind cover, since the enemy generally gets a huge range advantage with the same weapons, so if you're spotted, you're dead. It is possible to move a group forward with the cover mode on, but changing facing is unwieldy. Sometimes the best bet is to use just one commando at a time, keeping the others out of sight where they can't get killed and automatically end the mission. This doesn't do anything to reinforce the sense that you're commanding an elite force. Nonetheless, once you grasp the interface's strengths and limitations, there are some tremendous battles in store, including one that pits the Green Beret against a whole enemy encampment--with a 15-minute clock ticking down.

In the stealth missions, which often pair the thief or spy with a heavy hitter, it's easier to appreciate how a pair of characters can work together. Stealth is the series' trademark, and these missions are intricately designed to reward patience, as you watch the enemies' patrol routes, check their vision cones, and crawl carefully around crowded areas. In addition to special abilities, like the spy's distract, there are packs of cigarettes, noisemakers, and gas grenades to distract or disable enemies that simply don't leave an opening. There's perhaps just one instance where there's a single puzzle-like solution to a problem, but the overall level of challenge is extremely high, and getting to the next mission in the linear campaign sequence might mean stepping back and thinking about a completely different approach or trying one of the other campaigns, which thankfully can be played out of sequence.

For as hard as Commandos 3 can be, it's not all that long, with 10 maps divided up into campaigns of unequal length. Some missions may take several hours, particularly if you're still learning the game or get stuck in the wrong approach. Others are much shorter, including one that's little more than a 30-minute continuation of the previous mission. Barring any mishaps, most of the missions after the first campaign can be finished in about an hour each. You'd think that mishaps would be limited to being spotted or having a bomb go off in your face, but, in fact, just saving at the wrong moment could force you to restart a mission. Quicksaving is an essential lesson that's drilled into you from the first minute of the tutorial, but there's just one quicksave slot, and it's not hard to hit the quicksave key without realizing you'll be spotted a few moments later. Even using manual save slots can't stave off all problems, as we found out when our save games were corrupted not once, but twice.

The scenarios are challenging enough to warrant subsequent play-throughs, but Commandos 3's new competitive multiplayer mode doesn't add much lasting value. Instead of including the option to play single-player missions cooperatively, as in Commandos 2, the multiplayer options are limited to deathmatch and collect-the-flags modes. First, the challenge is to get things working, as the game doesn't offer a built-in server browser, and connecting via GameSpy Arcade worked only when we connected directly to a home broadband connection, removing an installed router. And even when facing players with low pings in small games, we experienced noticeable lag. Given that a single grenade can take out your entire force or that an ordinary rifleman set up for cover fire can take out a commando before you can react, the outcome of multiplayer battles can seem more like a matter of chance than skill. The multiplayer is clearly inspired by conventional real-time strategy games, but the game's design isn't well suited to straight combat.

Commandos 3 looks just as good as the previous game, which is saying something. The environments are artistically rendered, and there are decent snow and rain effects to underscore the changing seasons and theaters of war. But the engine hasn't undergone visual improvements, and it's locked at a resolution of 800x600, which is low by today's standards. The exterior camera can be rotated in just four directions, and this limitation can be an issue in the corners of the map, where it can be tough to see where you're going. Rotating the camera can also cause a few seconds of delay, something you can ill afford in combat just trying to draw a bead on an enemy. The audio is similarly solid, if familiar, largely bringing over the same character voices and underscoring the events with a resounding military-themed score. The real letdown is when you come to the end of a campaign. After all that effort, the reward is simply the "mission completed" message and a trip back to the main menu.

If any game offers the chance to understand just how impossible the heroic events of war movies would be to accomplish, Commandos 3 is it. Achieving objectives against all odds takes planning, timing, lots of luck, and saved games. For all that it can be rough going and unevenly paced, Commandos 3 offers some truly memorable moments, and each mission stands on its own as a unique challenge. Commandos 2 fans should find plenty of satisfying material, though this isn't the game that's going to get newcomers into the series. 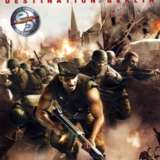