A lot of what made Command & Conquer great comes through in this package, but a few rough edges make it all seem a little sloppy.

Back in 1992, PC developer Westwood Studios released a PC game called Dune II. The game was based on the Dune universe, but in the end, the licensed sci-fi setting really didn't matter. The gameplay was what really sold it. Dune II was, in many respects, the game that launched the real-time strategy genre. But it sort of remained in a niche. That niche exploded into a full-blown genre with the release of Blizzard's Warcraft and Westwood's next game, which ditched the Dune license in favor of an over-the-top, near-future sci-fi story. That game was 1995's Command & Conquer. Over the years, Westwood, which was eventually absorbed into the Electronic Arts collective, has released a whole lot of games with the C&C name on them. Command & Conquer: The First Decade collects almost all of them into one package and includes a DVD that covers the series' history.

Most of the Command & Conquer games are recent enough that the originals still run on modern operating systems without much work. That, in some ways, makes the first couple of games--Command & Conquer and the alternate history spin-off, C&C Red Alert--the most interesting games in the whole collection. Released in 1995 and 1996, respectively, the above-mentioned games have been updated to run under Windows XP, but that's really about it. By today's standards, the video that gave the series so much personality looks absolutely awful--there are fake scanlines running through it and it's compressed with what was probably cutting-edge technology 11 years ago. For some, it will be a nostalgic treat; others will probably wish that the video was cleaned up. And people who run into a bug will probably wish that Red Alert played the between-mission cutscenes on the Soviet side. But everyone who remembers these old games will probably wish that the install sequences were included.

Many of the Command & Conquer games had long, drawn-out install processes that were deeply immersed in the look and feel of the C&C universe. Here, you're treated to the standard Windows installer. And since you're going to be installing up to 12 games off of the collection's dual-layered DVD, the install process is long. Like, go-get-a-sandwich-or-do-your-taxes long. The cool-looking install processes were one of the things that set the C&C games apart from the pack, and it's disappointing that they aren't included here.

The first two games in the series do have Internet multiplayer in there...somewhere. Unfortunately, this is another part of the package that wasn't updated. When you click on the Internet play button in C&C or Red Alert it simply asks you to install Westwood Chat, a client that Westwood released with the games that served as its player-matching service (Westwood Chat isn't included with the package, though). Some enterprising players in the community have cobbled together a way to get it all working. But it's sort of lame that players would have to jump through this many hoops to get it going, and it shows a real lack of concern on the part of those who were involved in putting the compilation together. Sure, players are probably more likely to be playing the more recent games in the series competitively, but slapping the warning of "Online play for games in this compilation may be discontinued and is not guaranteed" on the box and hoping for the best doesn't cut it. The early games in the series certainly don't look like they got much attention, even though this is a package meant to honor some of the greatest games ever made.

Of course, all of these complaints are about the things that surround the gameplay. The gameplay itself is as you remember it. Command & Conquer pits the G.I. Joe-like forces of GDI against the evil forces of the Brotherhood of Nod. Each side has two different, but functionally similar, sets of forces at their disposal, and you can play as either side. This is real-time strategy at its most basic. Waypoint systems? Intelligent pathing? Check back in a few years. While it's true that some of the things that aren't as polished in the early C&C games may annoy you if you've been keeping up with the RTS genre, the old stuff still holds up pretty well.

C&C Red Alert takes the concepts of the original and uses the same engine to put out something entirely new. The story is completely different, since this is an alternate history tale. Back in the World War II days, Einstein applies his mind to figuring out time travel...and succeeds. So he flings himself back into time and assassinates Hitler before his rise to power. This singular act recasts all of the 1940s, and it's Stalin and the red threat of the Soviets that instead rise to power, setting up an epic conflict between the Soviets and Allied forces that's marked by tesla coils and other crazy retrofuturistic technology.

C&C: Tiberian Sun is the true sequel to the original game, returning to the GDI versus Nod conflict with an upgraded engine. Tiberian Sun sticks relatively close to the original, and at that time it was seen as a fault, given the way the RTS genre was diverging. Taken out of that environment, the game works nicely as a sequel and goes bigger budget on the talent by including Michael Biehn and James Earl Jones in its cast. But yet again, the real star of the show is Joseph Kucan, who reprises his role as Kane, the evil mastermind behind Nod.

From there, things took a dramatic sidestep outside of the real-time strategy realm. Command & Conquer Renegade is a first-person shooter that attempts to meld the action-based gameplay of an FPS with the real-time strategy found in the C&C universe. It's sort of a weird way to look at Command & Conquer, and the game does a pretty good job of fitting in the different units and fiction associated with the series. That said, this game, originally released in 2002, perhaps looks the most dated of the bunch. First-person shooters just don't age well.

The natural follow-up to a proper C&C game is, of course, another game in the Red Alert line. Red Alert 2 and its expansion, Yuri's Revenge, used the same engine as Tiberian Sun to deliver a quality follow-up and more crazy FMV, this time including Ray Wise as the president, Kari Wuhrer as the allied commando, Tanya, and the always-creepy Udo Kier as the crafty Russian psychic, Yuri.

After that, we get into more modern territory with the most recent games in the series, Command & Conquer Generals and its expansion pack, Zero Hour. These games took the real-time strategy series to a polygonal world, giving you more control over your view of the action in the process. Generals doesn't go back to the GDI versus NOD conflict of the original series. Instead, it goes for the "ripped from today's (well, 2003's) headlines" thing by putting the USA versus China versus a fictional terrorist group called the GLA. It also broke away from the full-motion video that defines much of the rest of the series. It was a quality real-time strategy game in 2003, and despite some rust around the slightly outdated graphics, it still plays just fine.

In most cases, in fact, the gameplay holds up well. Even though the feature sets have changed and things like pathing and build queues improve from game to game, just about all of these games are still a lot of fun. If you're nostalgic about the older games in the series, then you'll probably have a good time playing those as well, although they're not perfect ports.

In addition to the games, the bonus DVD attempts to provide a little historical context with a number of short, edited features and interviews with various EA employees. But very little of it feels "inside," since Westwood shut its doors and some of its staff migrated to another EA studio. Instead, for the most part, you get to see people that are responsible for the Generals games talking about the first time they saw a Command & Conquer game and how that made them feel. Really, all this DVD needed was full-quality versions of some of the cutscenes, a few bloopers or deleted scenes, and an exhaustive "Where Are They Now: Joe 'Kane' Kucan" feature, and it would have been great.

This package is long on great gameplay, but it doesn't seem like the developers responsible for collating everything onto one disc took a great deal of care with the materials. If you're willing to overlook a few bugs and missed opportunities, you'll find some of the greatest real-time strategy games ever made here. But given the series' pedigree, The First Decade deserved a little more polish than it got, making the whole thing seem like a sort of "don't forget about C&C" product that's intended to drive interest in a new sequel. Let's hope that the team working on the second decade of C&C is a little more respectful of the legacy. 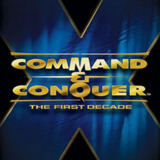 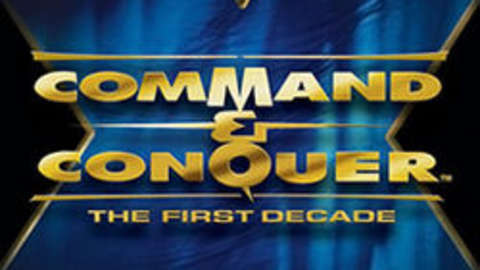 8.8
Sign In to rate Command & Conquer: The First Decade