It's sure to appeal to anyone interested in serious military simulations, but even those just looking for a good World War II computer game should find that it has a lot to offer.

Outside of the hard-core wargaming community, Combat Mission: Beyond Overlord didn't receive a lot of attention prior to its release. It was originally developed as the computer version of Avalon Hill's Squad Leader board game, but Avalon Hill terminated the license shortly before Hasbro Interactive purchased the company in 1998. Undaunted, developer Big Time Software pressed ahead and joined with online publisher Battlefront.com to finish the game this summer. While Hasbro's forthcoming Squad Leader may bear the title of the board game, Combat Mission is very true to its spirit, and thus it manages to be one of the best wargames ever made for the computer.

Many game players associate computer wargames with stuffy, turn-based strategy games that look a lot like the old board games that reached their height of popularity in the late '70s. Combat Mission brings wargaming up to modern standards without compromising realism and historical accuracy. The most striking aspect of Combat Mission is its fully 3D graphics engine, which, although not up to today's highest standards for computer-game graphics, nevertheless does a good job of presenting a believable World War II battlefield in such a way that hasn't been seen before in the genre.

Combat Mission depicts the fighting on the western front of World War II between the D-Day invasion of Normandy and the end of the war. Combat units consist of squads of infantry, individual leaders, and individual vehicles. Scenarios pit British, American, French, and Polish units against the Germans in a variety of situations, and you can play as either side, either against the computer or a human opponent.

The essence of the gameplay in Combat Mission is very simple: Each turn consists of giving orders to your units, and each is followed by an action phase where both sides' orders are resolved simultaneously. In the orders phase, units can be told to move, fire, crawl, run, place smoke for cover, or perform any number of other realistic combat actions. These orders can be very detailed - a squad of infantry might be told to pause for 15 seconds, crawl up to a hedge, fire over it at a target, and then run over the hedge and into a building. Turns last only 60 seconds of real time when they are resolved (although any amount of time can be spent giving the orders), so there is only so much a squad or tank can do at once. Unit coordination is the key, and because every unit is moving at the same time, becoming skillful at Combat Mission can take some time.

Because of the 3D nature of the game, line-of-sight rules are crucial. It's actually possible to adjust the view to "see" from a given unit's perspective simply by rotating the camera accordingly. Fortunately, Combat Mission has a good line-of-sight tool that makes this judgment easier. You can draw a line from any unit to whatever spot on the map you choose, and the color of the line will display whether line of sight is blocked, as well as where the blockage occurs. Yet even with this kind of help, the 3D view in Combat Mission will take some getting used to for those accustomed to 2D portrayals of combat. But the 3D landscape adds so much realism to both the graphics and the gameplay that the learning curve is well worth it.

The orders phase makes Combat Mission seem very much like a traditional wargame. What's surprising is the action phase: A real-time 3D game engine makes all the difference in a tactical wargame. The gameplay can be very tense as you watch a line of tanks roll down a road toward an objective, knowing that the enemy has hidden anti-tank weapons. The battlefield comes alive as your lead tank takes a hit from a concealed gun position up the road. The sound effects tell you and the game screen confirms that your tank was hit, but the shell fails to penetrate. Will the next shot be more effective? Did you remember to bring infantry support to engage the anti-tank gun? Combat Mission is as instantly exciting as a real-time game, but it allows for detailed strategic planning as well. The action phase can be replayed multiple times and from any angle, and it can be rewound, fast-forwarded, or paused. This makes it easy to find out exactly what happened to each unit, even in large scenarios. This combination of action and strategy is something that hasn't ever been achieved so successfully in a wargame.

Combat Mission, in keeping with its status as a historical simulation, features very detailed game mechanics. The game models a large number of units from all the combatants, and complex game formulas ensure that things like armor penetration and road speed are both realistic and accurate for each weapon involved. Combat Mission models human factors as well, so everything from panic and rally to the delay in response caused by units being too far from their commander is represented in the game. Combat Mission lets you plot detailed orders for each unit, right down to how fast a tank moves and what direction it faces, but when units start coming under fire, they may choose to defend themselves rather than continue following their orders and risking destruction.

There are several different play modes in Combat Mission. The most familiar one is the single-battle scenario, where each force has established units and objectives that are predetermined according to a historical situation. These range from river crossings to relieving the besieged British paratroopers in Arnhem to American attempts to halt the German drive during the Battle of the Bulge. There's a vast selection of scenarios, which includes battles of all sizes over many different types of terrain. Combat Mission even has urban combat, as you can fight to liberate Paris or re-create the gritty combat in the German city of Aachen.

Combat Mission also introduces multibattle "operations," which are essentially single scenarios fought over a very large map. Each battle takes place on a smaller portion of the map, and the starting positions for the battles depend on the results of the previous ones. Combat Mission also has a quick-battle feature, which lets you assign basic scenario guidelines so that the computer can generate a random battle. It's a good way to keep you from getting too used to the premade scenarios without forcing you to generate your own from scratch. However, if you specifically want to re-create a certain battle, you will want to take advantage of Combat Mission's powerful scenario editor. All the game's play modes are available for multiplayer combat, either via play by e-mail or on one computer. While Combat Mission is not yet playable via network, Big Time Software has promised to produce a free patch to add this feature later in the summer.

Combat Mission's artificial intelligence is like most all wargaming artificial intelligence: It's much better when it's on the defensive. It's more limited on the attack, and it has the tendency to make uncoordinated assaults that are easier to break up than they would be if a skilled human player were in command. Nevertheless, the overall quality of the AI is surprisingly good, and it has enough surprises in store to make all the scenarios worth playing from either side. While very experienced wargamers might not be overly challenged by the computer when they're defending, there are enough interesting attacking scenarios to keep even the most battle-hardened wargamers busy for a long time, just as many Combat Missions players are creating custom scenarios for download at various fan sites.

Combat Mission comes with an extensive, well-indexed manual that does an excellent job of explaining all aspects of the game. In addition, it's written in a straightforward style that's easy to follow, and it should be accessible to players of any level of experience. While the calculations used to model weapon performance are too complex to be worth describing, the factors that go into things like armor kills are explained so that you can easily figure out what each unit's strengths and weaknesses are, even if you don't have a historical background.

Combat Mission is sure to appeal to anyone interested in serious military simulations, but even those just looking for a good World War II computer game should find that the game has a lot to offer. The point-and-click interface is just about as intuitive as possible, and there's an excellent tutorial scenario accompanied by a detailed, step-by-step walk-through in the manual. Combat Mission should appeal to anyone looking for a challenging strategy game, as well as anyone that is even remotely interested in the 20th century's biggest war. If you're interested in immersive strategic gameplay with a historical focus, but you've always thought wargames to be too complicated or too dry, then Combat Mission is for you.

Combat Mission is available only on the Internet through publisher Battlefront.com's web site at a full-price retail game's cost of $45 plus shipping. It's also a rare case when a game developed by a small publisher (and essentially coded by one person) can stand up to bigger budget commercial releases without apology. Combat Mission has truly done something special for the computer wargame genre, and it will be remembered years from now as the game that turned the genre on its ear. Big Time Software plans to release follow-up games covering the eastern front, North Africa, and the early war, and considering how good Combat Mission is, that's something to really look forward to. 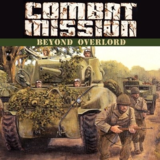