Barbarossa to Berlin raises the wargaming bar even higher with its pitch-perfect, ultra-polished improvements to an already great game.

Big Time Software's Combat Mission: Barbarossa to Berlin is an entirely new type of wargame that successfully combines many seemingly incompatible elements. It combines traditional wargame mechanics with 3D graphics, real-time action with turn-based planning, strategy with excitement, and minute details with an accessible interface. Barbarossa to Berlin is the follow-up to the first title in the series, Beyond Overlord. If ever there were a showstopper of a wargame, this is it. Barbarossa to Berlin raises the wargaming bar even higher with its pitch-perfect, ultra-polished improvements to an already great game.

The most immediate change that Barbarossa to Berlin makes to the original game is in the scenery. The graphics are much improved since the first game's quaint in-house-artist look, which was more concerned with fidelity than flair. They were the kind of graphics only a crotchety old wargame veteran could love. But this time around, the foliage is more complex, the textures are sharper, the special effects like fire and smoke don't look so homegrown, and the vehicle models feature more detail and animation. You'll spend more time getting in close to study the replays just because they look so good. With the possible exception of its stiff little infantry models, Combat Mission now looks like a big-budget game. The audio is as rich and full as ever, with careful attention paid to the sounds used for different weapons and the nationality of the men yelling at each other. You may not be able to tell a Finnish call for a medic from a Romanian one, but you'll hear them both here.

The scenery has also changed with the new location. Barbarossa to Berlin moves the action from World War II's western front to the huge swath of territory on the eastern front. There are four distinct zones, each with unique terrain, weather conditions, nationalities, and equipment, ranging from Finland all the way south to the Crimean peninsula. While the first Combat Mission seemed almost pastoral with its villages and hedgerows, this time the maps include denser urban locations. Although buildings are still fairly abstract (they're essentially a terrain type laid out in blocks), city fighting is more vivid, with new rules for damage to structures and sneaking through sewers.

More detailed infantry commands make house-to-house fighting less dependent on the AI by giving you more control over your men. For instance, a new command to advance under fire and use cover along the way is invaluable in the city maps. It's also easier to specify that an infantry unit should get in close to a tank to assault it (in the first game, they tended to think you were telling them to fire at a tank with their rifles, the World War II equivalent of shooting spitballs at a charging rhino). With new rules for infantry fitness and fatigue, Combat Mission can now model the difference between fresh inexperienced recruits and burned-out, war-weary veterans.

There are other new commands available for all types of units. You can set cover arcs to restrict where a unit will attack, making it much easier to set up the kind of close-quarters ambushes that made city fighting so deadly. The command "advance to contact" lets you specifically order a unit to stop as soon as it sees an enemy. This command makes early planning much more effective than simply hoping that the AI will act the way you want it to when the shooting starts.

The eastern front's steppes were the site of some of the war's most dramatic tank battles. Barbarossa to Berlin has some larger, more wide-open maps that really show off the armor combat model. New rules for gunnery optics, which were an important factor that wasn't figured into the first Combat Mission, give the Germans an edge, particularly in low-light situations and cold weather. You can now order tanks to "shoot and scoot" (move forward to take a shot and then retreat into cover) or go "hull down" (take up a defensive position behind a hill that leaves their turrets peeking over the hilltop). Most importantly, the AI for armor combat has been cleaned up a lot since the last game. Tanks don't have the targeting problems they had in the first game, where they'd develop an inordinate fixation on relatively harmless targets. As in Atomic's Close Combat series, tanks could be a little unreliable in Combat Mission: Beyond Overlord. Barbarossa to Berlin tidies this up nicely and allows for some epic heavy metal clashes without the headaches of the first game.

Barbarossa to Berlin also has some new interface elements that make playing the game much smoother. You can tell at a glance what weapons a unit is carrying. A color-coded box gives you quick details about the effectiveness of a unit's armor coverage. On the whole, Barbarossa to Berlin requires much less peeking into information screens to play. However, Big Time Software still doesn't support a mouse wheel, and there's no sensitivity setting for scrolling the map, which is a laborious process that takes longer than it should. And although the manual is as detailed and comprehensive as ever, the developer has mysteriously placed the table of contents at the back and called it an index.

Now that World War II is such a popular setting in first-person shooters, Combat Mission is a perfect venue for action-oriented gamers to have a more in-depth but no less exciting look at the subject matter. While it might not have the kind of glamorous, Hollywood-style appeal of Battlefield 1942, it's a refreshing alternative to the two previous approaches to wargaming: burying it under numbers and hexes or dumbing it down with Panzer General-style levels of abstraction and simplicity. Combat Mission navigates beautifully between these two extremes. Furthermore, as is the case with any good follow-up, it would be hard to go back to playing the original Combat Mission after getting a taste of all the innovations and improvements in Barbarossa to Berlin, which takes a great game and makes it even greater. 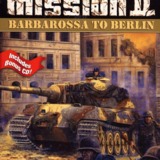