This old Tetris-inspired puzzler wasn't very special back when it was first released in 1990, and that aspect of it hasn't aged a bit.

It took only a little while for other developers to catch on after Tetris took the world by storm in the late '80s. That brilliantly designed puzzle classic inadvertently inspired an untold number of derivative games, which replaced Tetris' multicolored blocks with all kinds of different things, while retaining that game's basic theme of having you prevent puzzle pieces from piling up. Columns is a typical example of this. Once a budget-priced Sega Genesis game, Columns is now available through the Wii's Virtual Console service. The gameplay can still be fun for a few hours, but it's nothing that countless other puzzle games haven't done better since.

In Columns, groups of three vertically stacked jewels drop from the top of the screen, one group at a time, and you control where they land. You may use the buttons on the controller to shift the sequence of those jewels up or down, and when three or more jewels are aligned horizontally, vertically, or diagonally, you hear a tingly sound as they disappear, you earn some points, and any jewels above collapse down. This sometimes initiates chain reactions, which can lead to some exciting, unexpected high-score opportunities. Sure, you can plan for a complex chain reaction, but these often happen by accident, which makes Columns feel a bit random. There's also the magic jewel to keep an eye out for, which causes every instance of the jewel type it lands on to disappear from the playing field, virtually guaranteeing a big chain reaction. As in Tetris, the object of the game is to play for as long as possible to earn a high score, but the longer you play, the faster the jewels drop, eventually making it very difficult to keep up.

The game features a decent variety of modes, including the stock arcade mode for one or two players. Though both players have a separate field onscreen, there's no interaction between the players, so there's nothing inherently competitive about this mode. Alternatively, there's a cooperative mode available where the two of you alternate control over the jewels that drop, but this is more gimmicky than fun. Finally, there's a mode called "flash columns," which charges you with trying to eliminate a particular jewel at the bottom of a stack. It's a good, faster-paced alternative to the standard rules. Multiple difficulty settings are also available to help ensure that the gameplay starts off as fast and challenging as you want it.

The game is emulated flawlessly on the Wii. It still looks decent and has several catchy though somewhat serious-sounding musical themes to choose from, each matching the Ancient Greece-inspired theme. After all these years, Columns still stands up as a likable, playable puzzle game, but for 800 Wii points ($8) it's just not a good value for the money. Nevertheless, it's one of the first Tetris-style puzzle games for the Wii, and its simple, fairly addictive gameplay can be fun even if you never played the original version. 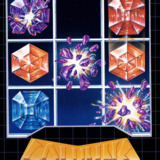 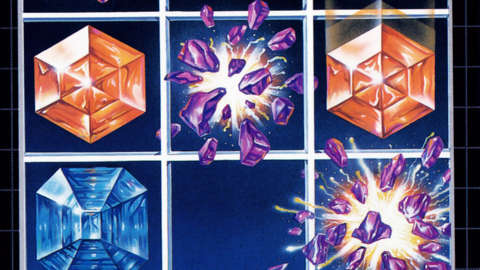 Organize columns of jewels in this puzzle game from Sega.