Colosseum has a few fun moments, but they're mired in dull hack-and-slash gameplay that isn't compelling or rewarding enough to make the game worth playing.

The high drama and theatrical violence of gladiatorial combat seems like the perfect setting for a video game. It worked for Capcom and the recent Shadow of Rome, and now Koei is stepping into the arena with Colosseum: Road to Freedom. Developed by Ertain, Colosseum is an action role-playing game that lets you lead the life of a slave who is forced to become a gladiator in order to slice, skewer, and bludgeon his way to freedom. Unfortunately, being a slave in ancient Rome isn't as fun as you might think, at least not in this game. Colosseum has a few fun moments, but they're mired in dull hack-and-slash gameplay that isn't compelling or rewarding enough to make the game worth playing.

In Colosseum: Road to Freedom, you begin by answering a few questions about where you're from, which god you worship, and what path you want to take. Based on your answers, you'll get one of three character models that you'll then take from slavery to freedom by fighting men and beasts in the blood sport that is the ancient Roman pastime. Early in the game, you're sold to a man named Magerius, who tells you that if you can match the price he paid for you, he'll let you go free. Magerius basically runs a gladiator training camp, which is where you'll stay during the game. Each day, you're required either to go to one of the arenas to engage in combat or to complete various training exercises to boost your stats. The story progresses as you see fit. You can choose not to fight at all, but you can't earn any money that way and thus can never earn your freedom. If you don't pay off your debt to Magerius within 50 days, you're forced into an impossible battle, which is basically a not-so-subtle way of telling you that you aren't cutting it as a gladiator and it's time to start over. It's frustrating since it takes a good eight hours to get to that point.

To earn money to pay off your debt, you can compete in various events that are held at one of two arenas. Each day there are six events to choose from, each with different rules, difficulty, and rewards. If you choose to do the sixth event first, you can't go back and do the previous five that day, so the best way to make money is to start at the beginning and work your way down the list. This is more difficult since you'll take damage during the battles, and healing between battles can get quite expensive. Also, if you lose a battle you have to pay half of your funds to be resurrected. You can quit anytime, but if you skip a lot of events you'll be missing out on some much-needed money. The easiest way to make sure you pay off your debt before your 50 days are up is to participate in every event, but you have to choose your battles wisely since you aren't always strong enough to survive each event, and losing is expensive.

There are several types of events to compete in, and each event is ranked depending on how tough the competitors are. The battle types range from last man standing and team matches, to mock battles and hunting events where you have to fight tigers and bulls. While the rules and objectives are quite different between the different types of events, most of the battles feel pretty much the same since you're just hacking and slashing your way through dozens of generic clones on the same two battlefields. Yes, there are only two battlefields in the game, and they aren't much more than empty space. There are a couple of environmental hazards in the arenas, like spiked poles and spinning blades that pop up out of the ground. These are easy to avoid, but the computer-controlled characters don't seem to recognize the hazards. It's easy to stand on the opposite side of a spinning blade from your opponent and watch him walk right into it over and over until he eventually dies from his own stupidity.

Colosseum tries to get fancy with a unique control system, but in the end it just degenerates into mindless button mashing anyway. The four face buttons are used to designate parts of the body, both when attacking and when managing items. For example, by pressing triangle you'll do an overhead chop that will brain your enemy, or you can hit X to try to cut your enemy's legs out from under him. If you hold L1 and press triangle, you'll throw your helmet, and if you hold L1 and hit circle, you'll throw the weapon in your right hand. Not only does this give you a ranged attack, but it also lets you pick up new helmets, shields, and weapons that enemies drop during battle.

One area of Colosseum that does feel fleshed out is the item system. During battle, enemies will drop weapons, shields, and helmets, which you can pick up and use right away. Or, you can wait until the battle is over and run around collecting all the items left on the ground. You can sell these items or just keep them stored for later use. There are hundreds of items in the game, including skill tablets, which can be equipped to give your character stat bonuses or special moves. Items can also be upgraded at a blacksmith shop to increase their strength. Weapons include a wide variety of swords, spears, chain weapons, and blunt instruments. Each item looks unique, and it's fun to try out different combinations to see how cool--or how ridiculous--your gladiator will look.

In addition to the look of your fighter, you can customize his style of fighting. The four styles are single sword, two-handed, shield, and striker, which is an unarmed attack. Based on which style you use, you'll earn experience, and your skill in that style will improve. Since you can switch styles in the midst of battle, you can adapt your attack to fit a variety of situations--as long as the right items are available.

The presentation in Colosseum is low-frills all the way. The character models look detailed enough when equipped with special items, and they do appear beaten and bloodied after you've given them a lashing, but the stages and cutscenes are bland and flat. The low-frills look is especially noticeable since you see the same thing over and over.There are only two arenas to fight in, and before each trip to the arena you'll see one of three cutscenes in which Magerius chooses which gladiators will fight. Surprise--you're always chosen! Luckily most of these scenes can be skipped. Even when you want to look at what's going on, you'll have to fumble with the free camera, which is controlled with the right analog stick. You can position the camera however you like, but since you're often surrounded by enemies, you never really have a good sense of what's happening around you. To top off the list of graphical problems, the frame rate drops significantly when there are more than three or four characters onscreen at the same time.

The sound in the game is varied, but for the most part it fits just fine. The weapons clash and clang appropriately, and the music matches the theme and blends nicely into the background. On the other hand, the voice work is often terrible. Some of the gladiators' voices sound like they were pulled from a Saturday-morning cartoon. During battle, you'll hear the same two or three phrases repeated every few seconds, which makes the computer opponents seem that much more like a bunch of idiot drones.

Colosseum: Road to Freedom is built on an interesting concept, but the gameplay just doesn't back it up. You'll fight the same battle a hundred times, only to be rewarded by a few new items that you can then use in more of the same battles. There are co-op and one-on-one multiplayer modes, but with only one arena and limited options, the multiplayer really doesn't add any value to the package. With other, much better gladiator games already available, this one ends up feeling like a step backward. 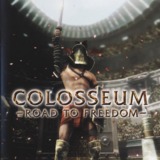 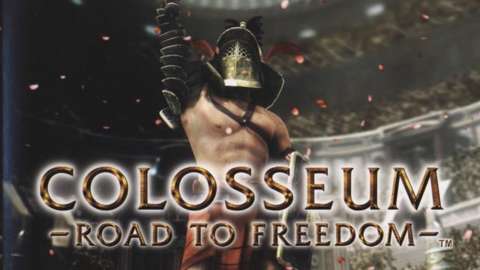 Colosseum: Road to Freedom is a multiplayer action role-playing game in which you play as a slave forced to become a gladiator in ancient Rome. You can earn your freedom by fighting in battles against man and beast.