Thanks to a greater focus on plot development and presentation, Psygnosis delivers with Red Sun what is arguably the best Colony Wars title to date.

In the distant future, the vastness of space is filled not with cries of joy and exploration but those of destruction and terror. For 200 years, the League of Free Worlds and the Colonial Navy have clashed against one another in a bitter war. Regardless of which side is right, each believes that the key to universal peace lies in its side's victory. Unbeknownst to both parties, though, a darker threat is pulling the strings. This is the setting for Psygnosis' third installment of the Colony Wars series, Red Sun.

This time around, you'll assume the role of Valdemar, a miner turned mercenary chosen by a higher power to defend humanity. It seems a mysterious dark force is about to attack just as the war is entering its final stages. The key to everything seems to be a new space cruiser called the Red Sun. Is the Red Sun a weapon of mass destruction, a symbol of peace, or something more sinister? That's what Valdemar must uncover. Thankfully, you won't be alone in your travels. As a mercenary, you'll be provided with a variety of backup during your missions and even make a few long-term alliances as well.

If you've played either of the previous Colony Wars titles, you'll be familiar with much of Red Sun's gameplay. You begin the game on Magenta Station, an outpost in orbit above the planet Peripolis. Aboard the station, you'll be presented with a series of potential missions - usually protecting convoys, stealing enemy secrets, or clearing systems of their hostiles. Should you accept and complete a mission, monetary bounty, promotions, and new starships await. Each craft can be upgraded with an array of weaponry. The first ship you pilot, the Magentech Snapdragon, has minimal equipment possibilities: lasers, stun missiles, and shield regeneration units. As you progress, new ships offer not only increased armor and speed, but also new armament capabilities. All told, there are more than 30 different weapons to acquire. When it comes to actual combat, little has changed from Colony Wars: Vengeance. Use the directional pad to steer your ship, thrust until you engage an enemy, and then blow it up. Repeat the process and try not to get killed. As in prior releases, larger ships offer sanctuary in addition to danger. While hulking galleons and battle cruisers possess a great deal of firepower, they also contain a great many nooks and crannies, all of which you can use for shelter. Has a fighter acquired missile lock on you? Are your shields in need of a recharge? Get in close and hide.

Unlike Vengeance's, Red Sun's game balance makes sense. Mission difficulty increases as you progress, but never past the line where luck overtakes skill as the deciding factor. Furthermore, friendly AI doesn't suck for a change. There's nothing more aggravating than having to take on an entire mission by yourself. This time around, wingmen can defend themselves. Red Sun's pilots are no Einsteins, but they don't ride the short bus to the space station anymore.

Where Colony Wars: Red Sun further succeeds is in presentation. The overall plot is expertly paced, highlighting the push-pull struggle faced by both sides while executing more than a few twists in the meantime. Since Valdemar is an independent mercenary, you'll be engaging in missions for both sides and your allegiances will change frequently. Several full motion video sequences are also present, showcasing the psychological changes occurring within Valdemar's mind and regaling gamers with plenty of giant explosions and gorgeous interstellar visuals. In-game graphics, while exhibiting some polygon dropout and texture tearing, really push the envelope in terms of speed and detail. Enemy ships are colorful and intricate, right down to fluctuating thrusters and cockpit design. Majestic, Star Wars-style music rounds out Red Sun's sensory presentation - offering a great deal of pomp and circumstance - despite its tendency toward being just a little too orchestral.

Thanks to a greater focus on plot development and presentation, Psygnosis delivers with Red Sun what is arguably the best Colony Wars title to date. Difficulty increases gradually over time, friendly AI is improved, and non-linear mission selection continues to be the series' strong point. Just like in previous releases, the game's 50-plus missions can be tackled in a variety of ways, leaving room for more than one possible outcome. Unless you've become fatigued by the genre, Colony Wars: Red Sun offers a great deal of bang for one's buck. 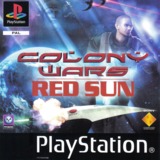