Don't let the budget price tag fool you. Colin McRae Rally 04 is every bit as good as its most recent predecessor, and in many ways, it's quite a bit better.

There is a certain connotation associated with budget games, and it's one that suggests that the overall quality of the product must be low, and thus the product requires a lower price to still appeal to consumers. In most cases, this does turn out to be true. However, in the case of Colin McRae Rally 04, which is the latest installment in Codemasters' critically acclaimed rally racing franchise, you mustn't let the budget price tag fool you into thinking the game is in any way lackluster. Colin McRae Rally 04 is every bit as good as its most recent predecessor, and in many ways, it's quite a bit better. Not only does it continue to refine the excellent racing gameplay found in Colin McRae Rally 3, but it provides a greater depth--in terms of modes--than last year's game.

Colin McRae Rally 3 struck a pretty impressive balance between realistic and easily playable driving mechanics, and in Colin McRae 04, the balance is even better, thus pushing the realism just that much further without compromising the game's pick-up-and-play style. The game features four different car types, including four-wheel drive, two-wheel drive, Group B, and a bonus category. You will feel a pretty significant difference between the cars you play from different categories. For example, four-wheel drive cars are the much more traditional brand of rally racers; two-wheel drive vehicles are designed to be more like day-to-day cars that have been customized for rally purposes; and Group B cars are a notoriously fast bunch that were quite popular in rally racing during the 1980s but were eventually banned due to the many serious accidents they were involved in. When driving a two-wheel drive car or a Group B car, there is a very noticeable difference between them in both handling and speed. There are a little more than 20 cars in the game, and each and every one feels different and varied enough to make it enjoyable to drive time and time again.

Adding to the realism of Colin McRae 04's driving mechanics are the game's array of tracks and the subsequent variations of terrain. Colin McRae 04 features races spread throughout eight different countries, ranging from the gravelly, dust-laden tracks of Australia, to the soppy, mud-bogged tracks of the UK, to the snow-covered tracks of Sweden. As such, it's up to you before each race to determine the setup for your car so that you can best acclimate yourself to the terrain in front of you. Terrain types on a track are displayed before a race by percentages, and you can alter details like your car's tire type, ride height, spring stiffness, and brake adjustment. Each of these details is quite important to how your car performs on a given track. Gravelly tracks require specific types of tires to prevent you from sliding all over the road, and likewise, setting your springs to a softer setting will also help your traction. You actually feel a legitimate difference between how your car handles on, say, light pea gravel versus heavy pea gravel, so it's not as though these settings are merely an arbitrary option. Although in several of the game's modes, you do have the option to simply race so that you don't have to worry about any of this. The game's championship mode requires you to learn the ropes of car setups, though, so you're better off learning how to properly configure your car.

Of course, if you're no good at figuring out the right combination of tires and spring settings required to keep your car on the track (or if you're just feeling wreck-happy), Colin McRae 04 gives you more than your fair share of ways to royally screw up your car. The damage modeling can be adjusted between two settings, and with it set to high, the damage really takes its toll. Bumpers, doors, and hoods shear off; windows shatter; tires explode; and rolling your car...well, let's just say it looks appropriately unpleasant. Now, of course, all of this damage will have an adverse effect on your ability to drive properly. In fact, most of the game's damage isn't even immediately visible but definitely takes a notable toll on your car. For instance, destroying your engine's cooling system results in terrible engine performance and even causes it to periodically shut off midway through a race. Though this might not be such a big detail when racing in a single race, when racing through a championship you're only able to repair your car once every two races. Additionally, you're only given an hour with which to repair your car, and each category of repair takes up a specific amount of that time. Going over the allotted time nets you a time penalty for the next race. However, if you're a capable enough racer, you should be able to navigate through the various rallies with only a reasonable amount of scathe.

Speaking of the championship mode, like most everything else in Colin McRae 04, it's gotten a nice upgrade over last year's mode. Unlike last year, you now have the option of choosing from any of the game's available cars to race with in this mode, instead of being relegated simply to racing as Colin McRae himself. Depending on which car you choose, you'll become a part of that car manufacturer's racing team, so you'll attempt to earn points for both yourself and your team as you blaze through a series of six-race, two-day rally events. As you play, you'll also take part in special one-on-one competitions against an opponent in an arenalike race, and you'll have the opportunity to earn new parts for your car by testing them yourself. Parts-testing takes place between countries, and you can earn items like upgraded brakes, snow and gravel tires, and gear boxes. Each test is like a minigame of sorts, where, for instance, when testing new brakes, you must speed through a course and stop within a specifically marked area of a track. Similarly, when testing new tires, you have to slide a sufficient amount to properly gauge the tires' ability to handle strain. This addition to the mode definitely adds a nice air of variety to the otherwise straightforward championship.

In terms of remaining gameplay modes, the rest of Colin McRae 04 is made up of standard quick race, single course, and single rally modes. The quick race is just a random car and track that's selected for you, which gets you into a competition as expediently as possible. Single course lets you run a time trial through any of the game's available courses. As for single rally, any of the championship mode rallies are available in a single sitting here, in addition to a few customized rallies and a couple of slots for you to create your own customized rallies. Colin McRae 04 also features Xbox Live support--of sorts--but it's only in a scoreboard capacity. Essentially, any time you log on, you can upload your top scores from the offline game on to an online scoreboard to see how you stack up against the competition. As the offline game does feature one-to-four-player split-screen multiplayer (and one-to-two-player multiplayer in the championship mode), it's a little disappointing that there's no direct online competition. However, it's definitely nice to have the online scoreboard.

Colin McRae 3 was an extremely impressive-looking game on the Xbox, and this year, though the graphics have aged a bit, the game still looks great. The most visual detail has clearly gone into the car models, which look absolutely fantastic. Each car features highly reflective surfaces and an excellent amount of detail. And as you drive through each course, you'll see progressive amounts of dirt, mud, snow, and what have you build up on the car. As mentioned before, the damage modeling is also pretty top-notch, so nearly every wreck shows off some really impressive breakage. Colin McRae 04's tracks are definitely nice to look at as well, though they lack the detail of the car models. From a distance, everything has a nice look to it (with lots of background foliage and buildings), and though these set pieces are a bit on the repetitive side, they're accurate for the locations they're trying to emulate. In terms of textures, all the track and background textures look very good from afar, but when examined up close, you'll definitely notice that they're not particularly high in resolution. Additionally, you'll see a few cases of tiling here and there as well. We also noted a couple of glitches from time to time, such as when we rolled our car into a level wall, and the car kept rolling even after we hit the wall. Also, when driving through a tunnel, the camera clipped through the wall, which led to a bit of ugliness. Fortunately, these issues were pretty few and far between, but they definitely did pop up here and there.

Colin McRae 04 also sounds really great. Colin McRae's longtime navigator Derek Ringer once again makes an appearance in this year's title, and his dialogue is pretty much what you would expect. The game also features navigator dialogue in multiple other languages as well. There's very little soundtrack to speak of in Colin McRae 04, save for in the game's various menu screens, but what's there serves as decent background fodder. Where the game really shines, however, is in terms of its in-game sound effects. When in the standard camera view, everything sounds really good. Every car's engine sounds different, slide-outs and crashes are just what they should be, and the sounds of the car simply bouncing around and skidding around corners are excellent. To top it all off, when you switch to the "in the cockpit" camera view, you get a whole new take on the game's sound presentation. Everything feels much more immersive, and all the effects definitely give you much more of a feeling that you're really inside the car. Of course, the fact that the game features Dolby Digital support only sweetens the deal.

Colin McRae Rally 04's overall package is an extremely well-put-together one, which really makes the fact that the game can be purchased for a mere $19.99 almost criminally insane. There is simply nothing wrong enough with this game to make it unworthy of a full retail price, and the fact that it is available as a budget title is really quite a lucky break for any racing fan. It may not be the definitive racing title for your Xbox, but that should not stop you from taking advantage of what is, in essence, an incredible deal in Colin McRae Rally 04. 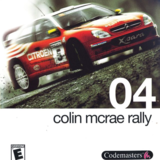