Coded Arms: Contagion is a by-the-numbers first-person shooter that does nothing poorly, but nothing particularly well, either.

The original Coded Arms was nothing special, but it did garner a fair share of attention because it was the first first-person shooter for the PSP and people were curious about how the game would handle the system's lack of a second analog stick. It wasn't really much of a game, but apparently someone thought a sequel was necessary. Enter Coded Arms: Contagion. It improves on its predecessor in a few ways and does have online play, but those improvements aren't enough to make it good. Combat is still dull, the story is unoriginal, and the level design is average. There's nothing truly interesting about the game--it's just sort of there.

Contagion's story is a mishmash of a bunch of generic sci-fi themes. Cliché one: You're an elite special forces agent. Cliché two: You've got futuristic armor and a fancy heads-up display. Cliché three: During a routine training mission, things go awry when (cliché four) the virtual reality simulation goes haywire. Cliché five: It's up to you to figure out what's going on, (cliché six) save your squad, and (cliché seven) stop the terrorist group hell-bent on yadda, yadda, yadda...

A basic level has you taking on buglike creatures, flying drones, enemy soldiers, tanks, and so on. Because the controls limit your ability to aim and maneuver, the enemy artificial intelligence is scaled way back. Thus, your foes do little more than stand and shoot halfheartedly in your direction. This makes it possible to hit targets by using the face buttons to manually aim, but you're better served to tap down on the D pad to lock on to your targets. Mission objectives are dull and mostly consist of unlocking doors. Lots and lots of doors. Sometimes you'll have to find a terminal to unlock a door, but most of the time, you simply walk up to the door and hack it. This is by far the game's worst aspect. When you go to hack something, whether it is a door, terminal, or security system, you're shown a horizontal row of numbers on the left side of the screen and another on the right. One number is on both sides, and you've got a limited amount of time to find it. As you progress further into the game, you're given multiple rows and must find more numbers. It's dreadfully boring, not very challenging, and incredibly tedious by the time you're hacking your one hundredth door.

The game's coolest feature is its upgrade system. You've got a number of weapons at your disposal, and you're allowed to swap out your hardware at any of the game's numerous save points (another nice feature). You can also upgrade your weapons and armor by spending upgrade points that are hidden throughout the levels. This lets you enhance the weapons you use the most and also forces you to decide between upgrading your armor or your guns. But even this isn't well executed because the game caps your levels, only opening up new slots at predetermined intervals, which means you're often left with a bunch of upgrade points but no way to spend them.

New this time around is online play. It's a nice idea, but it's not very good. There aren't a whole lot of people playing, but you should at least be able to find a match. The problem is that when you do, you'll spend your time running around not hitting anything because of lag and the fact that you can't lock on to anyone. Our time with the online portion of the game was spent charging straight at guys who in turn were running straight at us in a mad dash to be the first to actually hit someone.

Contagion's visuals are technically sound, but like the rest of the game, they're uninteresting. Despite the 3D map in the top-right corner and the mostly linear levels, you'll still find yourself getting lost because the rooms all look the same. They're the same drab colors and filled with the same uninteresting objects. There are crates and trailers in some rooms, as well as trailers and crates in other rooms. Enemy design is actually pretty good, particularly some of the bigger, badder foes. But the standard soldiers and buglike creatures are typical sci-fi fare. Audio isn't bad, while the voice acting is competent and the sound effects are pretty good.

It's not that Coded Arms: Contagion is terrible--it's just uninteresting. If you found yourself enjoying the original game, you'll probably appreciate the improvements that have been made with the sequel. But if you're in the market for a good PSP FPS, you'll want to pass on Contagion. 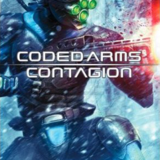 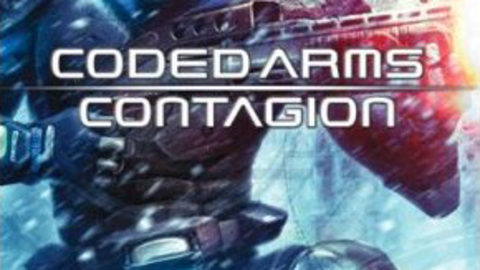 Coded Arms: Contagion charges players to use their hacking skills and impressive weaponry to thwart cyber-terrorists.