Code of Princess is a fun and funny fantasy brawler that's unfortunately hampered by technical issues.

Code of Princess has a renowned lineage to live up to. It has been promoted as being from several of the staffers behind the Sega Saturn (and, more recently, XBLA) beat-'em-up classic Guardian Heroes, so fans had high expectations. Code of Princess doesn't quite hit the notes necessary to become a similarly loved genre classic, but it's still a solid brawler with a distinct personality to it.

The game follows scantily dressed Princess Solange and her ragtag team of companions as they rescue the land from a wicked queen. It's a straightforward story, but the dialogue and characters are anything but. The world of Code of Princess is self-aware of its fantasy ridiculousness, and there are some amusing interactions among the cast of playable weirdos. The cast is fairly sizable (though only four characters are playable in the campaign), and they're all distinct in their appearance and demeanor: Lady Zozo is a disinterested necromancer constructed from "spare parts"; Allegro is an axe-wielding elf bard who swears he's just a few experience points from being the world's best sage; and the only thing that stands out more than Solange's skimpy armor (which everyone in-game agrees is ludicrous) is her self-preservation instinct. Ali, the speedy thief, is the most grounded presence in a world populated by masters of Ultimate Manimal Arts and nuns that forgo prayer to beat the sin out of people.

What makes the humorous characters and setting even more appealing is the ease with which you can dive into the game. Code of Princess' side-scrolling brawling action takes a dash of inspiration from traditional action and fighting games without complicating its formula too much. Characters have a set of basic combos and strikes, along with special skills performed with button presses combined with other inputs. Each character has a distinct moveset, but their commands are all quite similar, making it easy to hop from one character to another--you simply need to learn which command corresponds to which skill.

If there are a lot of enemies onscreen, you can lock on to one by hitting it with a Y button strike, which allows homing magic and techniques to target that foe exclusively and regular strikes to deal additional damage. Learning how to use character skills to set up and perform mega-damaging combos on hordes of enemies is one of the most fun aspects of the game.

There are a host of defensive maneuvers you can perform as well. You can guard against attacks and take less damage, and double-tapping a controller direction while doing this allows for a quick dodge. As in Guardian Heroes, the stages are made up of multiple side-scrolling combat planes, and you may swap the plane you are currently on. This is handy for getting away from large swarms of foes and sometimes lets you take advantage of objects in the stage for cover. Since enemies can swap planes as well, it's usually only a temporary reprieve from combat, but jumping from plane to plane wisely can help you lure enemies in and set up big-damage strikes. Finally, you may unleash a powerful burst technique that can blow away groups of foes and grant a temporary strength boost in exchange for all of your fighter's current magic power.

While the game takes a lot of inspiration from Guardian Heroes, it's quite different in the way it progresses. Code of Princess doesn't present branching paths through the game. Instead, you play through individual missions that make up the longer, linear story. You can choose to replay completed sections of the game, as well as bonus missions that unlock as you complete parts of the main story. As you complete these quests, you unlock new equipment and playable characters for the game's multiplayer modes, as well as money to buy new items from Marco the feline shopkeeper. You also gain experience points and levels for your characters that permanently increase their capabilities. Once a stage has been unlocked for one character, it's available for all other characters as well, so you can swap between them as you see fit.

However, this feature highlights one of the issues with Code of Princess. There are sudden spikes in difficulty, and if your characters' strength isn't adequate, you'll find yourself outclassed by enemies quickly. It's tempting to swap characters constantly throughout the story, but if you do this, you'll soon find all of them lagging behind in levels when the really tough battles begin. You don't get any consolation experience points if you wipe out during a stage, either, even if you've spent a good amount of time playing through it. If you don't want to play a single character through the whole story mode, you need to grind in the free play modes and missions, which can quickly become annoying and repetitive. (Late-addition story characters like Allegro will likely need to grind anyway.) If you don't feel like gaining levels, you can attempt to exploit the enemy AI with hit-and-run tactics, which isn't any less repetitive.

A more serious issue, however, is the frame rate. Code of Princess looks nice, with well-animated sprites, appealing character designs, and a good use of the 3D effect with the combat planes. However, once more enemies begin to show up, the frame rate takes a noticeable hit, which is a very distracting problem in an action game with a lot going on at once. The frame rate issues are particularly egregious in the multiplayer modes. The game supports up to four players in local or online multiplayer sessions. Playing with a single buddy competitively or in co-op modes is a lot of fun, but once more than one friend joins the fray, the frame rate starts to collapse to the realm of near unplayability. Turning off the 3D alleviates this issue somewhat, but the need to shut off one of the console's main features to enjoy the game properly is frustrating.

There's a lot to like about Code of Princess: the characters and dialogue are amusing, the combat is fundamentally solid, and there's a lot of replayability in the various missions and side quests. Even though some design and technical hiccups prevent the game from reaching the heights of its inspiration, there's still enjoyment to be had from this goofy fantasy romp. 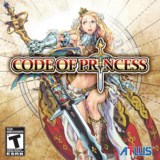 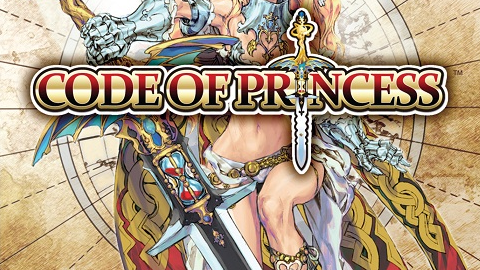 Code of Princess is an action RPG brawler for Nintendo 3DS with cooperative and competitive multiplayer.