Cloning Clyde is a side-scrolling platformer that deals largely in puzzle-based gameplay. As you play, you'll run your little dude around, stepping on buttons, carrying rocks and other objects around, and as the title might imply, creating clones of yourself to help with the puzzle-solving process. If you remember the classic Blizzard game The Lost Vikings, you probably have a basic idea about how Cloning Clyde works. But regardless of your prior knowledge of this particular type of game, Cloning Clyde is a charming Xbox Live Arcade title that offers a good amount of entertainment for its 800-point ($10) price.

The game opens with a static comic page that shows Clyde getting a quick 20 bucks in exchange for volunteering to be a part of some experiments. The experiments, which naturally involve a cloning machine, go awry, and before too long, there are tons of Clydes running around. Now it's up to you to help those Clydes escape, in 35 levels of action. Each level uses the same basic setup. You begin with only one Clyde, but you might find more locked up in a box, or you might find a cloning machine that you can use to make more Clydes. Your goal is to destroy a set number of security machines--which also happen to spit out exploding mutant chickens--and escape through a teleporter. But you'll earn a higher score if you first move all the cloned Clydes you've found to escape tunnels that are placed in various spots in each level, or if you collect a number of action figures. On top of that, the game's a race against the clock, with more points coming your way if you can beat a par time for each level. Since much of your time is spent getting anywhere from three to more than 20 Clydes out of the level once you've destroyed all the security machines, it seems smartest to go for completion first, then make a second run at the level to beat the clock. This whole process would go a lot faster if you could actually lead a string of Clydes at one time, but instead you have to control each one individually and switch control to a new Clyde once you've gotten one to escape.

Clyde's abilities are pretty limited. He can stand on stuff, like buttons; he can pick up rocks, chickens, and other objects; and he can double-jump and punch stuff when needed. But those chickens, and eventually other animals, have a secondary purpose. You'll often find a DNA combiner in a level with two pedestals. The idea is simple: You put a chicken, a sheep, a monkey, an explosive barrel, or some other object on one end, stand a Clyde on the other, then touch the B button to combine them. By doing this, you get a new, mutant Clyde with some new abilities. Combining with a chicken lets you fly. Combining with a frog lets you swim. Ape-Clydes can climb across certain ceiling surfaces. Sheep-Clyde can cover large distances with jumps. And combining with an explosive barrel gives you an explosive barrel with arms and legs that can blow up over and over again at will, which is usually used to blow up barriers. You can also combine with a rock to form a rock with arms and legs, but that form never actually seemed to be required to successfully complete the game. The different Clydes you'll use are really cool and give the game some variety, but the level design usually gives you an animal and a DNA machine right at the start of the level, and you're rarely working with more than one mutated Clyde at a time, so much of the game is pretty straightforward. Also, unless you're racing against the clock, there's no real pressure in the game. Clydes will perish if they take too much damage from land mines, hover mines, exploding chickens, Clyde-eating plants, and so on, but they just instantly respawn at a checkpoint. So you can take your time and think out each level, if you like.

But even if you're stepping through each level slowly, no one level should take more than 15 minutes or so, making Cloning Clyde a good game for people who like to play in short bursts. There are 25 levels to the main game, but after every four levels, you'll unlock two of the game's 10 challenge levels, which aren't that much harder than the main game. With 35 levels in all, there's plenty to do and see in Cloning Clyde, especially if you're the sort of completionist that wants to find every action figure, lead every clone to an escape tunnel, and come in under the par time. And if you can do all that, there are achievement points waiting for you. You'll earn points gradually as you play, and with the exception of one achievement, they're all focused on the single player.

That's right, there's a multiplayer side to Cloning Clyde, as well. You can play four-player games in either a co-op mode or an arena mode. Co-op puts multiple players in control of different Clydes and asks you to work together in the single-player game, which can get a little confusing with four players running around wildly, trying to accomplish tasks. It's probably a better option if you're looking to play with friends you can trust, since random strangers might just break down and start picking up Clydes and throwing them around aimlessly. That sort of behavior is perhaps a bit better suited to the versus mode, in which teams of two attempt to destroy the opposing team's security machines. The multiplayer works over Xbox Live, but you can also play on a split-screen.

The game's polygonal graphics are simple but offer a unique-looking art style plus well-animated characters that give the game a lot of personality. Clyde starts off in his hospital gown, but you can unlock skins as you play, turning your Clydes into robots, cowboys, mutants, and more. The sound effects change a bit depending on which skin you use, which is a neat little touch. The game's audio is effective. There isn't much music to it, but each level starts out with enough to set the mood. 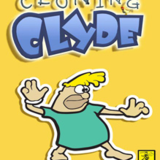