If you're just now playing Zelda II for the first time, you'll probably wonder why everyone was so excited in the first place.

Originally released in 1988, Zelda II was something of a shocker. The NES offering took the top-down dungeon-crawling of the original and turned it into some kind of crazy side-scrolling, action RPG hybrid. While the game was a huge hit, history hasn't been especially kind to it, with seemingly countless people writing this sequel off as the "black sheep" of the series. While feelings about the game are definitely more mixed these days than they were when it was first released, the one sure thing is that its scattershot design hasn't aged particularly well. As a result, this Game Boy Advance rerelease of the original NES offering isn't so hot.

Zelda II puts you back in the shoes of Link, who is trying to both save Zelda (this time she's asleep) and prevent the return of the evil Gannon. You'll accomplish these tasks by visiting a handful of palaces and defeating the bosses therein. The story is contained mostly in the manual, because the only other text comes from villagers who have little of importance to say to you.

Story aside, Zelda II is dramatically different from the other early games in the series. While it still gives you an overworld, of sorts, you don't really do anything here other than move around to different places on the map. If you stray from the well-worn paths between areas, you invite random encounters. Entering a fight, a town, a cave, or just about anything else drops the game into a side-scrolling perspective that gives off more of a Mario vibe than a Zelda one. This means the combat is more about properly attacking and defending high and low attacks.

While the overworld leaves a lot to be desired, the side-scrolling action in Zelda II is pretty good. There's a decent variety of enemies, which forces you to use a handful of different tactics to succeed. Link can also employ magic, which you'll learn in the game's towns. Life magic, which restores your health, is the most useful, but spells like jump (which makes you jump higher) and shield (which reduces how much damage you take when hit) are useful as well. Despite the new perspective, the game's palaces are sufficiently mazelike, giving you plenty of corridors to explore and many enemies to face.

Like the other entries in the Classic NES Series, Zelda II is pretty faithful to the original game. The only noticeable difference is that the backgrounds are slightly squashed to fit the GBA's aspect ratio. The sprites, however, are still full size, meaning that you'll be able to see Link's feet sticking partway into the ground instead of on top of it. It's a minor difference, but it's worth noting just the same. The game's sound also correctly mirrors the NES release, with all the same music and effects you heard back in 1988. The game also saves like the original game, letting you save after losing all of your lives and sending you back to the start, which can be pretty annoying throughout the early parts of the game, but once you've increased your health and magic meters a bit, the game gets easier.

For nostalgic purposes, Zelda II for the GBA puts on the same show that it did back on the NES. It's a reasonably lengthy game (unless you still remember where everything is), the side-scrolling is intact, and that one villager in the first town still simply says, "I AM ERROR." However, the antiquated design doesn't stand up too well today. Having to rely on three lives to get everywhere, and fumbling through towns with very little direction about where to go next (Here's a hint: Bagu's cabin is hiding in the forest) represents the sort of stuff that will make you wonder what you saw in the game back in '88. And if you're just now playing it for the first time, you'll probably wonder why everyone was so excited in the first place. 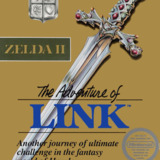 Zelda II: The Adventure of Link
Follow
$49.96 on Walmart
Buy