Donkey Kong still plays well, but with only three of the original arcade version's four screens and no meaningful play options, it's hard to recommend.

Last week, Nintendo released a brand-new Game Boy Advance game that depicts the never-ending struggle between the company's first two breakout stars, Mario and Donkey Kong. Now the company is digging into its vaults to rerelease the very first chapter in the battle. The original game, Donkey Kong, marked the first appearance of both the antagonistic ape, Donkey Kong, and his nemesis--and Nintendo's flagship plumber--Mario. This rerelease is part of the Classic NES Series, which takes old 8-bit games for the Nintendo Entertainment System and runs them on a Game Boy Advance. It does a great job of playing the NES version of the game, but since the original NES version cut a few corners compared to the original arcade version, DK aficionados may notice that a few things are missing.

The story and gameplay in Donkey Kong is as simple as it gets. Donkey Kong has stolen your lady friend, Pauline. It's up to you, as Mario, to get her back and defeat the evil ape. The game has three stages. The first is a simple stage full of girders. Donkey Kong tosses barrels down at you, and you have to reach the top to proceed. The barrels roll down the girders toward you, so you'll have to either jump over them, avoid them by climbing ladders, or bust them up with a hammer, which acts as a sort of superweapon. Stage 2 is the elevator stage, which puts two moving platforms in the level. Again, you must make your way to the top, but you'll have to navigate a trickier level layout and time your movements so that you don't get clocked in the head by the constant stream of large jacks that Donkey Kong flings at you. The third and final stage is where Mario gets his sweet revenge. You must knock out a series of bolts to cause a series of girders to collapse, thus sending Donkey Kong crashing to the ground in a daze. Doing this reunites Mario with Pauline. However, the reunion's not for long, because the game then loops back to the first stage--but with a slightly higher difficulty. Play continues until you run out of lives.

The NES version of Donkey Kong, which provides the basis for this Game Boy Advance edition, is missing quite a few elements from the original arcade version. The largest omission is the game's most elaborate level, an entire stage set in a pie factory. Most of the little presentational elements, such as the initial climb and stomp sequence that opens the arcade version and the "how high can you get" screen that precedes each stage, have been cut from this version of the game. On the upside, the game does a fine job of emulating the NES version of the game, but fans of the original game may come away from this feeling like they're missing part of the picture.

In the graphics and sound department, this game matches up with the NES original. Donkey Kong was released for the NES in 1985, but its Japanese roots on the Famicom go back a couple of years earlier than that. As such, this goes back to the bare-bones days of the system--back before programmers had really figured out the bells and whistles that would make later NES games look light years beyond the early stuff. By modern standards, of course, this makes the game look and sound quite bad, but you can't ask for much more than a perfect translation of the original game, and in this context, Donkey Kong does a fine job. The only real difference between the original NES game and this new release is that the aspect ratio of the GBA's screen is different from that of a TV, so the display has been squashed a bit to fit. But you'll only really notice this when you look at any onscreen text, which looks a little squished.

All of the Classic NES Series games contain a new menu that is brought up by hitting the L and R triggers simultaneously. It allows you to save your high scores, enter sleep mode, or start a link-cable game. You can play linked-up games with one cart, which is nice, but since Donkey Kong isn't a simultaneous, two-player game, there's no reason to link systems together. You have to save manually, which works well, but it would have been nice to see the game just automatically save your high score.

Overall, Donkey Kong still plays well, but with only three of the original arcade version's four screens and no meaningful play options, it's hard to recommend the game to anyone who isn't bent on collecting all of these new rereleases. $20 for a port of a NES game is a bit much to ask, especially when you consider that other classic updates for the platform have come in compilation form. $20 for a handful of NES games would be much easier to swallow. 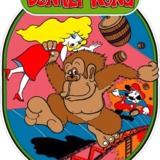 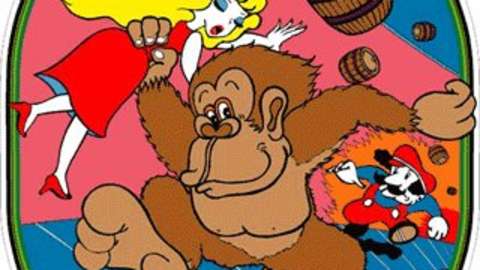 This 1994 update to Donkey Kong added puzzles and new moves to the old Donkey Kong formula.