Warlords adds six new civilizations and other enhancements to Civilization IV, but the cool new scenarios are the real treat in this expansion.

If you own Civilization IV, then you've probably conquered the world a fair amount of times by now. (You've probably been crushed an equal number of times, as well.) If the usual conquer-the-world-style gameplay that takes you from the Stone Age to the Space Age is beginning to look a bit familiar, then you're in luck. Nearly nine months after Civ IV shipped, we have Civilization IV: Warlords, an expansion pack that adds a lot of excellent content to an already great game.

Civilization has a long history of expansions. The second and third games in the series each had two expansion packs released for them. Warlords continues the tradition by introducing both improvements and additions to the regular campaign game, as well as introducing a slew of new scenarios that offer a completely different style of play from the epic game. The expansion adds six new civilizations, and while they're introduced to flesh out the individual scenarios, they're all available in the regular campaign game, as well. You can now play as the Carthaginians, the Celts, the Koreans, the Ottomans, the Vikings, and the Zulus. Just like the civilizations in the core game, each of these civilizations has its own unique units, famous leaders from history, and snazzy musical theme.

Warlords takes its name from the new warlord unit in the game, which is sort of like the old great-general unit from previous Civ games. Indeed, in the regular campaign game, warlords appear as great generals, sort of like how the great artists, great engineers, and other great-people units would pop up from time to time in Civ IV. Armed with a variety of powers, great generals can lead your armies in war, and they can bestow experience points on regular units under their command. Or, great generals can speed up your military-unit production in a certain city or make it so that new units start out with extra experience.

While the additions to the core game are nice, they're not exactly ground breaking. The regular campaign feels pretty much the same as before, only there are new leaders and civs to contend with. There are also a number of new wonders of the world, but for the most part they blend into the existing wonder set pretty seamlessly, save for the Great Wall, which has the cool effect of erecting a huge wall around the borders of whichever civilization completes it first. Still, the real meat in this expansion is in the scenarios, which are basically brand-new games in many regards.

These new scenarios are engaging, though they do skew a bit toward ancient-world settings and conflicts. Still, the campaigns here are interesting, and each features a unique challenge. These scenarios are essentially modifications of the core game, and they feature rewritten tech trees and unique units that are appropriate for their settings. So instead of getting a full-fledged tech tree that covers everything from the wheel to fusion power, you might get a more focused tech tree that lets you create upgraded versions of existing units or that unlocks certain upgrades. Many feature a limited number of turns in which to accomplish your objective, something that might not sit well with conservative Civ players that like to sit back and build up their cities. Risk taking is rewarded instead, which will probably sit well with aggressive Civ players, and it may also teach conservative players how to become more opportunistic.

A number of new scenarios are basically retellings of epic conquests from long ago. Alexander's Conquest focuses on Alexander the Great in the fourth century BC, and your job is to conquer your way eastward across the Persian Empire and into India before you run out of turns. You really have to push aggressively to accomplish everything before time runs out. The Peloponnesian Wars and the Rise of Rome scenarios also cover the ancient Mediterranean world. The former is a challenge thanks to the geography of Greece, as you must master sea power to move armies around the many islands of the archipelago. You can play as either the Spartan or the Delian League (Athens). The Rome scenario, on the other hand, focuses on the Mediterranean at large, and you can play as the Carthaginians, the Romans, the Celts, the Egyptians, or the Grecians to see which civilization is ascendant.

Two of the scenarios are set in the Far East. The Genghis Khan scenario really turns convention on its ear, because the goal isn't to conquer and settle so much as it is to conquer and pillage everything to the ground. The Mongols also have a unique build mechanic, since they're essentially a nomadic society. Rather than build cities, the Mongols bring their camps along with them, and where you set up your camp determines what kind of units are recruited that turn. Grassland means cavalry, while desert means infantry and forests can be catapults, assuming you've recovered the technology from a sacked civilization.

Meanwhile, Chinese unification lets you play as any of the major houses vying for power in the fourth century BC. Your goal is to become the emperor of China, and you can do so by force or through diplomacy by getting enough rivals to vote for you in the council, so this scenario is sort of like the regular campaign game in that regard. However, there are interesting new rules. Basically, religion is replaced with bloodlines, and the way to get other factions to be more agreeable to you is to arrange marriages and "spread" your bloodline around. The tech tree has been reworked extensively to allow for the massive armies that were featured during this era, and there are cool and unique little features in this scenario, such as the ability for each faction to build national walls. These are sort of like the Great Wall wonder, except each faction can get one. The new vassalage feature (also available in the campaign game) is useful here, as you can subjugate a foe and make them your devoted ally.

Then there's Omens, perhaps the most interesting and unique of the scenarios. It's set in 18th Century North America, making it the most "modern" of the scenarios in the game, but it's not what you expect. You play as either the French or the British as they attempt to colonize the New World and spread Catholicism or Protestantism, respectively. The goal is to convert at least 75 percent of the map by the end of the game. The kicker is that a divine spirit appears at regular intervals and basically unloads on whichever faction is in last place (including Native American factions). This means that there's constant pressure to stay ahead of your opponents, because if you fall behind at the wrong moment, you're in for it. The divine spirit is unstoppable and will easily crush any military unit in its way using fireballs. The only thing that you can do is try and hold out as long as you can, and it goes away after a while.

Finally, the Barbarians scenario lets you play as those pesky barbarians that plague the campaign game. In fact, this scenario starts out just like a regular Civ IV game, only the artificial intelligence controls all of the civilizations. The game will begin just like a normal game, and at a certain point your barbarians are introduced. You'll start out with enough gold to purchase different barbarian units and unit upgrades, and then you have to destroy as many civs as possible. You can't capture cities; you can only sack them, as well as pillage terrain improvements. This gives you gold, which can be used to purchase more units at your mobile camp, which must be defended. This can be fun, as after having endured barbarians over the course of four Civilization games, it's satisfying to have the shoe on the other foot for a change.

There's a lot of really cool content to go through in Warlords, and you can easily find yourself lost in any one of the scenarios. They'll most likely appeal to Civ veterans looking for a new challenge or a new gameplay experience, though. Even at their easier difficulty levels, the scenarios might be a bit too much for newcomers, who should stick to the regular campaign game for now. We did notice a few bugs, such as great-wonder movies that didn't play, but overall, this expansion is a lot more polished than Civilization IV was at its launch. Of course, it has the benefit of incorporating all the patches that have been made to the core game over the past year, and it also packages the pit-boss multiplayer client that was released separately, as well. Still, if you liked Civ 4, Warlords is a must-have expansion. 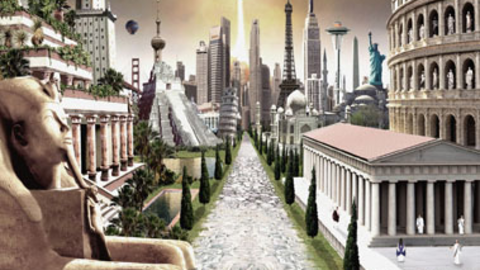 Once again you can control the development of a civilization, in Civilization IV. Civilization IV adds gameplay enhancements and a redesigned interface to make playing the game faster and easier.