The shallow, repetitive gameplay of Children of Mana negates any nostalgic charm that the game might have attempted to capture.

The Mana series of role-playing games from Square Enix is known for charming character design and action-focused dungeon exploration. While it worked in the beginning with the classic Secret of Mana, the formula has grown stale over time. The latest game in the series, Children of Mana, is about as fresh as a week-old tuna sandwich. The game gets by for a short while on an appealing art style, easy-to-grasp gameplay, and almost too-cute characters, but it never goes any deeper. Children of Mana just puts you in one random, generic dungeon after the next, where it's your job to clear each floor of enemies until you reach the boss at the end. If you die, you have to start over at the beginning of the dungeon and repeat the process all over again. The overall design of the game just feels lazy, and the mindless busywork that comprises the bulk of the game simply isn't fun. Children of Mana looks good, with some solid though underdeveloped concepts at play, but it is much too shallow to provide anything more than fleeting enjoyment.

Children of Mana is a sequel to Sword of Mana, which appeared on the Game Boy Advance. Just as people are starting to piece their lives back together after the massive cataclysm, a new evil emerges. Of course it's up to you to wield the holy sword and put an end to the evil uprising to save the world of Illusia once again. When you start a game, you can choose one of four different characters. Each character represents a typical role-playing archetype. There's the fighter, who has high defensive capabilities and can dish out heavy damage in melee situations; the frail magic user, who is effective from a distance with magic attacks; a female dancer, who is a strong magic user; and a young male hero, who is a good all-around fighter with good magic and physical attack capabilities. Because you're stuck with a single character for the entire game, you'll want to choose carefully, although the characters don't really play much differently anyway.

All of the evil in the world of Illusia is conveniently contained within a handful of elementally themed dungeons. It's your job to go to each dungeon and work your way through one floor or "zone" after the other, vanquishing the boss at the end. In each zone, you have to find a gleamdrop and a gleamwell, which are the key and door, respectively, to the next zone. You can leave a dungeon any time to warp back to the one town in the game and change your equipment, as well as purchase and sell items. However, if you leave the dungeon or die, you'll have to start over from the very first zone, and all of the enemies will be revived. This is extremely frustrating because each zone usually has dozens of enemies that have to be killed before you can move on, which means it can take a long time to work your way through each zone. When you die on the ninth zone of a dungeon and have to repeat those first several zones again, the game becomes very tiresome. Most of the dungeons have fewer than a dozen zones to get through, but even a dozen zones feels like too many because you have to go through all of the zones in one try.

Because there's nothing else to do in the game, there's also no break from the monotony of dungeon clearing. There are a number of side quests that you can pursue, but they all involve trudging through the same (though randomized) dungeons. Every few zones, you'll hit a checkpoint where you can save your game or change your equipment; two things that you can't do while in a dungeon. At the end of the dungeon, you're graded on your performance. Based on your grade, you'll be given a choice of rewards such as items, weapons and armor.

The combat in Children of Mana is interesting for a few minutes, but it quickly settles into a rut. There are four types of weapons to choose from: swords, flails, hammers, and bows. Each weapon has a different attack pattern and a unique secondary function. The sword is good for slashing combos but can also be used to block and deflect incoming attacks; the hammer is slow but will send enemies flying around the map, causing them to take damage as they hit other creatures and items in the environment; the flail has a circular attack motion that's great for clearing out enemies and can also be used like a grappling hook to retrieve far-away items; the bow is a basic ranged weapon, but you can also pluck the string to make music that will charm nearby enemies. You can equip two weapons at a time, so if you want to dual wield a flail and hammer, or a bow and sword, you can. One weapon is assigned to the A button, while the other is assigned to the X button. This makes it easy to switch from using one weapon to another, without having to pause the game and bring up a menu. Even so, the combat comes down to just pressing A or X over and over again until all of the enemies are dead.

You're also equipped with magic, but the magic system is very limited because you can only have one mana creature with you at a time. This means you only get access to a couple of spells. Each mana creature has different properties, as well as an attack spell and a support spell. There's the fire mana, the holy mana, the earth mana, and more. When you summon your mana creature in battle, it will automatically attack nearby enemies. Or you can summon the creature and then make contact with it to activate its support ability, such as healing, invisibility, negating status ailments, and so on. The fact that there are so few spells in the game makes the magic system feel completely underdeveloped and almost pointless. It can be useful for healing yourself when you run out of items, but for the most part you'll never need--or want--to use magic.

There's also a special attack gauge called the "fury gauge." As you fight, the gauge will fill up. When it's full, you can activate fury mode by pressing the Select button. This makes you move and attack faster, and you can also hold the attack buttons for special attacks. Unfortunately, just like the rest of the combat, it feels completely unsatisfying. Instead of hacking and slashing, you can hack and slash a little bit faster, but it's not worth getting excited about.

The final twist on combat comes in the form of special gems that you can equip to your character to get bonuses, such as increased attack power or added defense. There are about 180 different gems to collect, and you can also combine them to create new gems. Each gem has a specific size and shape, and you have limited space to equip them. So even if you have a ton of gems, you won't be invincible by any means.

Even with the gems, magic, and fury gauge, the combat (and thus the entire game because there is nothing else) in Children of Mana is extremely repetitive and dull. Between dungeons, you go back to town and talk to people to take on quests that will send you back to the very same dungeons you've been through already. After you've cleared the main story quest, the layouts are randomized each time you go through but they’re not any more fun to slog through all over again. Depending on how many times you die and have to start each dungeon over again, you can easily finish the game in less than 12 hours, which is comparatively short for a role-playing game. You can play through the game again as each of the four different characters and try to complete every single side quest, but once you've trudged through these dungeons, you'll probably never want to go back.

One way to make the game slightly more enjoyable is to play multiplayer with up to three of your friends. Using the local wireless connection of the Nintendo DS, you can connect with friends to form a party and then play through the game cooperatively. If co-op isn't your thing, you can also play competitively and try to run through dungeons to grab as much loot as possible before your friends. However, each player needs a copy of the game to play. Even with friends, the flaws in the game's design are readily apparent and will limit the amount of fun you can have with this game.

The saving grace of Children of Mana is the appealing visual style of the game. Right from the start, you can tell this is a Mana game. From the cartoonish and cute enemies, such as the classic rabites, to the colorfully detailed backgrounds and crazy-haired heroes, the game has a very charming look to it. The bosses are especially imposing as they dwarf your character and stretch beyond the screen. There are also some brief but impressive fully animated sequences that are interspersed throughout the story, which provide a nice visual treat. The music fits the tone of the game very well, with catchy and soft melodic loops that play in the background without getting annoying.

Children of Mana feels like a relic of game design. The simplistic dungeon crawling feels almost primitive by today's standards. When playing this game, it's difficult to shake the feeling that you're traveling a short path to nowhere. The gem system, magic, and multiple unique weapons are solid ideas that unfortunately go to waste. The story isn't substantial enough to excuse the tedious gameplay in Children of Mana, and the result is a mediocre action adventure that fails to generate any excitement. Unless you're content with the most basic of dungeon crawlers, you'll be disappointed by this game. 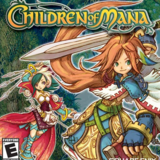 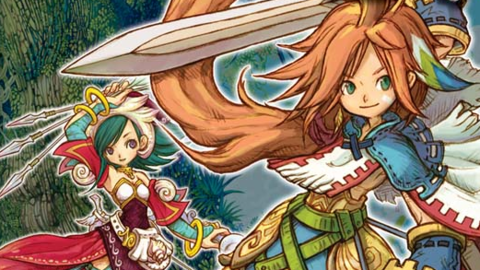 Seiken Densetsu is a sequel to Sword of Mana for the Nintendo DS, and features up to four player coop play.