Child of Eden may be over quickly, but it offers emotional highs you'll want to experience again and again.

Child of Eden is a brief but magical journey into a world where the mechanical and the natural fight for survival. Like producer Tetsuya Mizuguchi's previous game Rez, the aim is to eradicate an enemy virus from a computer system through five individually themed levels. Unlike Rez, though, Child of Eden has the option of motion controls via Kinect, resulting in a more engrossing, if slightly more cumbersome, experience than the standard control pad. However it's played though, Child of Eden is a game that offers an abundance of adrenaline rushes and emotional highs. And though you can reach the end credits quickly, the sumptuous visuals, ethereal sounds, and wealth of unlockable content ensure that you'll want to keep coming back for more.

Child of Eden has a story, and while it's vague and left to personal interpretation, it's effectively woven into the game without the intrusion of cutscenes. It takes place centuries into the future, when mankind has ventured deep into space, and the internet has become a vault for human knowledge known as Eden. Deep within this system are the memories of the first child born in space, called Lumi; the trouble is that she's under attack from a virus, so it's your job to fend off the invasion. If you successfully "purify" the parasites, you awaken more of Lumi's memories, and images of this young girl are used to great emotional effect as you come closer to waking her from her slumber.

Child of Eden is an on-rails shooter infused with some simple rhythm action elements. An onscreen cursor is used to attack enemies; blue for lock-on and pink for rapid-fire. The idea is to use the blue lock-on fire mode to highlight up to eight enemies at a time (known as an octa-lock) and then use the rapid-fire mode to shoot down enemy projectiles, as well as certain enemies (who are always coloured pink). Extra points are awarded for firing an octa-lock in time with the music, with "good" and "perfect" messages appearing onscreen to let you know when you're doing it correctly. Finally, euphoria (a screen-clearing bomb, essentially) can be used to clear the screen of enemies if things become too hectic.

While the mechanics remain the same whether you're using the Kinect or a standard controller, the experience is quite different. The default standard control scheme has you holding the A button to lock on, the X or right trigger button for rapid-fire, and the B button to activate euphoria. On the Kinect, you wave your right hand to lock on to enemies and then flick your hand forward to release the shot; you use your left hand for rapid-fire and put both hands in the air to activate euphoria. There's also an alternative control scheme where you clap your hands to change weapons. Either way, you're only required to move your hands rather than your entire body when using the Kinect.

Both control schemes work well, but the standard controller is easier to use. The Kinect tracking is good and the camera sensitivity can be adjusted in the menu system, but there are times when weapon changes will unintentionally move the camera and leave you feeling disorientated. But what the Kinect loses in ease, it makes up for by being the more immersive experience. Aside from allowing you the freedom to move in time to the music, it gives you the feeling of conducting an electronic orchestra as your movements directly affect the music and sound effects. With either control scheme, you can elect to put standard controllers in your pockets and have them vibrate in time to the music, which complements the rhythmic shooting.

Each of the five levels is based around a theme, such as passion or matrix, and each motif has a striking and memorable visual/aural identity. Beauty, for example, sees you flying over lakes, shooting flowers and butterflies, and avoiding enemy projectiles that emit the sound of water droplets as you take them down. Every level ends with a boss battle, and these epic multistage encounters are undoubtedly the highlight of the game. Early on, you face off against a giant whale that turns into a phoenix, and later on, colliding planets transform into giant, running men. Later bosses change into forms which are only susceptible to one type of weapon.

If you're willing to submit to the sensory experience of Child of Eden, you'll find it euphoric, artistic, and downright spine tingling at times. You can finish the five main levels and see the credits in a little over an hour, but thankfully there's plenty of replay value in the form of new difficulty settings, alternative visual styles, and an unlockable challenge level. There's also content that requires repeated plays to unlock, such as concept art, music videos, and items that can be played with in Lumi's garden. Unlocking all of these items means completing the levels many times over, improving your purification rate, and performing specific tasks within each level, such as 50 perfect octa-locks.

Child of Eden throws an incredible amount onscreen and suffers only minor instances of slowdown. However, the more impressive achievement comes from its artistic design. Beautiful visuals, superb sound effects, and a sumptuous electronic score combine to make your senses tingle throughout the game. The soundtrack, by the band Genki Rockets (of which Miziguchi is a member) isn't as eclectic as the one in Rez, but it is just as memorable. There are no multiplayer options, but online leaderboards at least afford you a way to compete with friends.

Child of Eden is a bold artistic experiment that's also accessible and fun. It's easy to pick up and play, offers bursts of pure joy, and is even a pleasure to watch others play. It's over quickly, but the amount of unlockable content means it's something you can keep coming back to. Ultimately, if you value novelty and emotional engagement in your games, you'll find Child of Eden a memorable and rewarding experience. 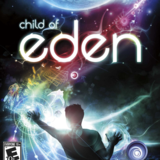