Based on this year's film of the same name, Blitz Games' Chicken Run is a fairly amusing, if slightly flawed and gimmicky, platformer out for your holiday dollar. The game takes a cue from Konami's classic Metal Gear Solid, and Blitz' decision to emulate Metal Gear Solid's focus on stealth fits Chicken Run's theme very well. As the film is based on the WWII POW movies of yore (such as The Great Escape), the Chicken Run game's play focus is quite consistent. Despite this, though, the game's production values are often inconsistent, and its mechanics are flawed.

Inhabiting Tweedy Farm is a particularly vicious breed of watchdog. In a manner very reminiscent of that of Metal Gear Solid's genome soldiers, the dogs semi-mindlessly patrol the environs, letting out all manner of visual and audible clues when they've been alerted to your presence. They appear as pips on a small onscreen radar display, which allows you to track their movements throughout the areas. What's more - and this is where Chicken Run's "tribute" borders on shameless thievery - the dogs' fields of vision are depicted as cones, allowing you to see where, exactly, you can move without getting busted. Overall, the whole detection system seems too loose and inconsistent. Being a certain distance from the dogs, for example, often arbitrarily alerts them to your presence. Other times, practically pulling their tails won't garner so much as a suspicious sniff. The action that most consistently summons the heat is stepping into a lit area, be it a piece of ground illuminated by Farmer Tweedy's flashlight or the glow of a lamppost that rests over a fence. Once one of your feet is even slightly illuminated, the hounds will normally be on you in two seconds flat, regardless of their relative position. This leaves one with the feeling that enemy AI wasn't fully refined, with a tight holiday deadline being the likely cause. Once caught, at any rate, you're thrown back to the entrance of the area and stripped of one of the items you were carrying.

The camera that aids your traversal of Tweedy Farm is also inconsistent. In some areas, it's marvelously adjustable, while in others, it's subject to arbitrary shifts imposed on it by the areas themselves. Some areas cause it to behave downright spastically, though in truth, it never wholly ruins the experience, as a top-down perspective is maintained at all times. When it is adjustable, it's controlled by the digital pad on the DC controller. The D-pad's position relative to the analog stick (which moves your chicken) makes it less than accessible, especially during particularly heated moments. In all other respects, the control setup is passable, as it includes a jump button, an action button, and a button that allows you to bombard your enemies with sprouts.

Chicken Run's overall production is spotty. While the graphics are decent visual translations of the movie's stop-motion models, Blitz seems to have skimped on detail. The characters are recognizable, to be sure, and the environments are competent, but they honestly don't seem to push the hardware in the ways that have become commonplace. The texture quality is inconsistent, as some of the darker areas look decently rich, but the better lit areas look unpleasantly pixilated. The voice work is rather good, though, which is not surprising, given the game's movie-licensed nature. Music is sparse in most areas and nigh unnoticeable in others. Neither case serves as a testament to the sound's thoughtful conception, and the unimpressive sound effects do nothing to redeem the overall audio production.

While those who are fans of the film might find some redeeming quality in Chicken Run, most should definitely avoid it. While it may have been aimed at a younger audience, the game mechanics aren't necessarily simple enough for the kids to grasp easily and subsequently enjoy fully. The various minigames that dot the disc are often amusing, but the game's questionable mechanics detract from its overall quality. Which is sad, as Chicken Run could have been a fun, if pleasantly derivative, game. 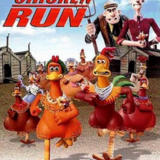