Playing Chibi-Robo can sometimes feel like a chore, but the game is redeemed by a great sense of humor and colorful cast of characters.

Picking up garbage hasn't been this fun since Men At Work, but that really isn't saying much. That's right, the latest action adventure game from Skip and Nintendo has you collecting garbage, scrubbing stains, fetching odd items, and generally doing things that you might play video games to get away from. But as menial and uninteresting as it sounds, Chibi-Robo has plenty of personality and charm to spare, which ends up saving what is otherwise a tedious and unfulfilling game.

Chibi-Robo is a 4-inch-tall robot who is purchased by Mr. Sanderson for his daughter's birthday. The little robot's purpose is to make the Sandersons happy by completing a variety of chores and fetch quests. Right from the start, it's pretty clear that the Sanderson home is anything but a happy one, which means that Chibi has a lot of work ahead of him. Luckily Chibi has the help of his chatty manager, Telly Vision, a robot who looks like a little floating television. Telly not only explains the basics of the game, but also talks on behalf of the mute Chibi.

With Telly's help and some basic yes and no responses, Chibi can interact with all of the living creatures in the Sanderson household. The family is made up of Mr. Sanderson, an unemployed slob who sleeps on the couch and only thinks about toys; Mrs. Sanderson, a neat freak who constantly frets over the family's dire financial situation; Jenny, a little girl who thinks she's a frog and only says, "ribbit"; and Tao, the family dog. The Sandersons aren't the only inhabitants of the house, though. All of the toys in the house come alive whenever the Sandersons aren't around. These characters are all unique and colorful, compelling you to visit them often just to see what kind of silly, funny, or bizarre tales they have to share. There's Space Hunter Drake Redcrest, a superhero who is obsessed with achieving justice through vigilance, shouting, and striking poses; Captain Plankbeard, a wooden pirate who lives in the basement and longs to sail the high seas once again; Funky Phil, a disco-dancing flower; Dinah, a T-rex comedian made of plastic building blocks; the Free Rangers, a group of hard-boiled eggs dressed up as soldiers, and many more. The characters are scattered throughout the Sanderson's modest two-bedroom house. There are several areas to explore, but the entire game takes place inside the house, with the backyard being the farthest you can venture outdoors. Some areas are inaccessible at the beginning of the game, requiring you to complete a task or purchase a specific upgrade in order to progress.

The main goal in Chibi-Robo is to make everyone happy, and there are several ways to accomplish this. You can perform simple household chores like picking up small scraps of garbage and cleaning stains with a toothbrush, or you can complete a variety of specific favors for the tenants of the house. These favors usually involve finding and retrieving a certain object or a series of objects. In an early interaction with Mrs. Sanderson, you have to fetch a sugar cube for her tea, then a spoon to stir the tea with, and finally a cookie to go along with it. There's no direction in the game, so you mostly have to just wander around, talk to characters, and just hope that you can figure out what you need to do. If you want, you can just walk around cleaning all the time--it's entirely up to you.

Whether you're doing chores or playing fetch, you earn happy points and moolah. Moolah is the currency of the game, and you can spend it at the online store via your chibi-PC to purchase flower seeds, spare batteries, and chibi-gear. Chibi-gear is equipment that you can use to help you accomplish your daily tasks. You can buy an arm-mounted blaster cannon, a little helicopter head attachment, and other upgrades. Happy points, on the other hand, are simply the representation of how well you're doing your job. As you accumulate happy points, you improve your rank among all other Chibi-Robots in the world. As you move up the ranks, you'll earn bonus batteries, which hold a charge longer and let you venture farther and farther away from electrical outlets.

Because Chibi-Robo requires electricity to operate, you have to charge up his battery every few minutes. If Chibi is ever completely drained, he'll have to go back to the chibi-house and will lose some moolah. The diminutive robot trails a cord behind him that he can pick up and plug into any electrical outlet to recharge. In the beginning of the game the battery runs out pretty quickly. But, as you earn happy points and get bonus batteries, you can go much longer between charges. It's a frustrating mechanic, because you often have to drop everything you're doing to go find an outlet. Because Chibi is so small and the house is so large by comparison, it takes a long time to get anywhere, especially if you have to climb up and over furniture. It takes even longer when you have to stop halfway and backtrack to find an outlet. Certain areas are so far removed from electrical outlets that you can't even explore them until later in the game when Chibi's battery has been upgraded.

The time cycle also interrupts the pace of the game, which can be extremely frustrating. There are two states in the Sanderson household: day and night. Chibi doesn't need to sleep, so you can work and explore whenever you want. Each period lasts 5, 10, or 15 minutes, depending on which timer you purchase. The problem is that every time the game switches from day to night or vice versa, you are called back to the chibi-house. This is aggravating, because it means that you have to start over from the beginning every several minutes. Since it takes awhile to get anywhere, you usually have time to complete a single task or a handful of smaller tasks before being called back to your house. This problem is slightly mitigated when you purchase a longer timer, but the frequent interruption sets a tedious and repetitive pace that drags down the entire game.

It takes a lot of effort to get around the house, because, after all, Chibi's legs are only a couple of inches long. To make life a bit easier, you can purchase utilibots by recycling scrap metal. Scrap metal is earned by killing small, insectile robots called spydorz with your chibi-blaster. The spydorz materialize every now and then, but they never pose much of a threat and are easily dispatched. Once you've collected enough scrap, you can purchase one of three utilibots. These are small machines that Chibi can plug into to help him get around the house. You can purchase ladder, bridge, and warp utilibots, but there are only a limited number available and they can only be placed in predetermined locations. It doesn't take long to collect enough scrap to build every utilibot in the game, at which point fighting the spydorz becomes trivial because the scrap you collect is useless.

Chibi-Robo moves much like your standard platform-hopping hero, except he can't jump on command. Instead, whenever he can hop up a ledge, a small icon will appear above his head, and if you hold the analog stick in the right direction, he'll jump up to where you want to go. He can only climb ledges that are shorter than he is, though, which can make traversing certain parts of the house a major chore. Chibi can also climb up plant stalks, shoelaces, purse straps, and cords on a blind, which is handy because a lot of secrets and items are higher and off the floor. Chibi can also interact with items like blocks, drawers, and switches. When Chibi approaches one of these items, an icon appears over his head and you can press the A button to interact with the object.

Aside from the utilibots, Chibi can use tools that he collects throughout the game. He can use a spoon to dig holes and plant seeds, a syringe to deliver water to plants or dehydrated frogs, and more. Chibi can also wear different costumes. The costumes don't affect Chibi's abilities in any way, but they elicit specific reactions from the characters Chibi interacts with. For instance, if you wear the frog suit and talk to Jenny, you can actually understand what she says. These costumes are mostly just for fun, but certain ones are required in order to initiate some of the exchanges in the game.

The visual style of Chibi-Robo is a bit dated, but the crisp, colorful graphics fit the theme perfectly. The characters manage to convey plenty of emotion with their facial expressions and limited, jerky animations. The Sanderson's house is quaint and colorful, with furniture that seems naturally arranged to develop a theme for each room. The level design does a great job of conveying a sense of scale, so as you explore the house you really feel like you're seeing the world from the perspective of a tiny robot. Although, this can make it difficult to see where you're going, as your view is often obstructed by huge pieces of furniture. There is a first-person view you can switch to if you need to inspect something, as well as a top-down view that will help you to quickly locate important objects in each room. The default camera angle works well for the most part, and you can control it with the c-stick or center it behind Chibi by pressing the L button. There are times when you'll get in a tight spot with a bad view and limited camera control, but they are few and far between.

The sound design in Chibi-Robo goes a long way in lending the game its charm. Every action that Chibi performs creates a sound, but it isn't the sound you might expect. Instead, you hear musical tones accompanying the actions onscreen. So, for example, instead of hearing brushing noises as you scrub a stain, you'll hear musical notes. Even Chibi's footsteps have a musical quality to them, which changes depending on the surface he's walking on. So while there isn't much in the way of real sound effects, the notes that accompany the action onscreen give the game a cheerful and upbeat tone. The actual music is as varied as the cast of characters. There's a jazzy tune that sounds a lot like something you'd hear in a Mario game, a heavy metal track that plays whenever you fight spydorz, and even a cheesy superhero theme song for Drake Redcrest, complete with English lyrics. In fact, that's the only English you'll hear in the game. The characters all have their own voices, but they speak entirely in gibberish. Some of the voices sound hilariously odd, but they manage to convey a lot of character with just a few bizarre sound effects.

Chibi-Robo is a game that you have to take at a leisurely pace, and it demands a lot of patience to truly appreciate what it has to offer. You can put as much time as you want into the game without getting anywhere, but it will probably take around 14 hours to see most of what there is to see. Despite the monotonous and occasionally tiresome gameplay, the great cast of characters and offbeat sense of humor manage to make Chibi-Robo a compelling and ultimately enjoyable experience. 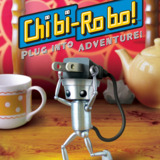 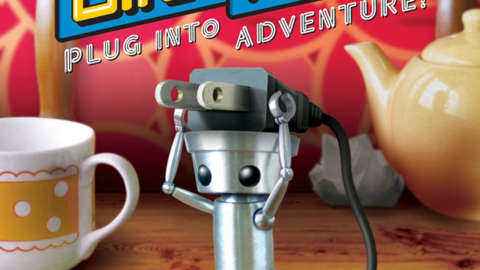