If you're looking for a good chess program that's packed with a plethora of features and all the bells and whistles, you'll be very happy with Chessmaster 10th Edition.

All of the chess engines from the last few years can whip the pants off of any human ranked less than grand master, so how do you entice anyone to buy a new chess program? Chessmaster 10th Edition's approach is to pack the program with a huge bundle of features aimed at everyone from the neophyte who's looking to learn the basics to the advanced wood pusher who may need practice for tournament play. The result is a very good package that will satisfy most any chess enthusiast.

Chess fans look for three key feature areas in their chess programs: graphics, learning and tutorial capabilities, and modes of play. The Chessmaster series has always excelled visually, and the 10th Edition follows this tradition--but not without some caveats. The 3D pieces and boards look great, and you have the ability to adjust the board size and viewing angle to whatever position you prefer. You also get to choose from a selection of animated 3D sets. But while the game boasts 25 3D chess sets, a number of them must be unlocked before being used--a contrivance that may be acceptable in driving games or other genres, but seems somewhat out of place here. Unlocking a set requires winning a certain number of ranked games (games in which you play a ranked player where the results affect your ranking), and several require a substantial number of wins--we're talking dozens. Some may welcome the incentive to play and win, but many players will be frustrated by the inability to use all of the advertised boards and pieces before winning scores of games.

There's also an "enhanced 3D" feature that involves using old-fashioned, red-and-blue-lens paper glasses, which come enclosed. The effect is fun to look at for a short time, but it's more of a gimmick than a long-term, useful feature. For computer chess purists, a few 2D sets are offered. They're OK, but those serious players most likely to use the top-down 2D sets may be disappointed in that none of them are really top-notch. Also, if you have Microsoft ClearType enabled on your computer, the menu bar text will be a blurry purple font. These criticisms should not be taken as a condemnation of the overall graphical presentation, because most players will likely pick a good 3D set or two and will stick with them for most of their playing time (many of the fancy 3D sets are more for show than for play against a foe), and the lighting, reflections, and overall graphic depiction of the chess sets are very good. In addition, free, downloadable chess sets are already available from the makers of the game.

Once you get into the learning and gameplay modes, the dual nature of Chessmaster 10th Edition becomes apparent. There's an entire segment of the program that is directly targeted at kids. Click on the "fun" icon and you're presented with several options: play, puzzles, and learn basics. The puzzles and learn basics features are just what they sound like: puzzles and lessons targeted at kids, with simple interfaces, emphases on fun, and rewards (such as printable chess certificates). The play option in the "fun" section of Chessmaster 10th Edition provides games against lower-level players that use a whimsical, animated chess set. This aspect of the game is very well done, and it may serve as an excellent means to draw young, new players into the world of chess.

The learning tools in the more "adult" section of Chessmaster 10th Edition include a great deal of information targeted at beginning players. The highlights of the "academy" are the sections taught by Josh Waitzkin (the subject of the movie Searching for Bobby Fischer) and grand master Larry Christiansen. Both feature spoken commentary that accompanies the principles explained on the board. While much of Waitzkin's tutorial will be of little interest to intermediate and advanced players, his annotated games, which illustrate the psychology of chess, are intriguing for all levels of players. Christiansen's "attacking chess" is more interesting for experienced players, but it's too short, because only six (though a very interesting six) games are analyzed. Christiansen also presents a fascinating analysis of a four-game match in which he played against Chessmaster 9 at its highest difficulty setting.

The rest of the academy includes a variety of drills and puzzles, which are, again, mostly directed at lower-level players. Other learning materials in Chessmaster 10th Edition include a large database of famous games (that feature mostly sparse annotation) and a section on openings. In spite of the plethora of material, there is actually room for improvement in some sections. For example, in the openings section, there is a practice drill on the difficult king-knight-bishop mate, but there's no explanation on how to accomplish it. As a result, lower-level players will simply become frustrated attempting it. And many of the openings described in the "practice openings" section go no deeper than four moves. Many, in fact, consist of just one move.

After all the drills and tutorials, and after deciding whether to go with a standard Staunton 3D chess set or something a bit more off-the-wall (such as a set composed of nuts and bolts), it's time to actually play chess. Chessmaster 10th Edition shines in gameplay modes. You can challenge a wide range of "personalities" with varying strengths (from pure beginner to grand master level) and styles. For instance, one artificially intelligent player may favor bishops inordinately over knights, while another may be much better in speed chess games rather than standard time settings. Each of the AI players has a biography and a photo attached, but, alas, once you're into a match, there are no added personality touches (such as comments on your moves, for instance). You can play ranked games in which you select an AI opponent and in which the results of the game impact your rating; for example, beating a much higher-ranked player will result in a considerable boost in your rankings, while losing to a lower-ranked foe will drop your level significantly. You can also select to play in a wide variety of prearranged tournaments that are set up according to skill levels and playing styles. The only major flaw in Chessmaster 10th Edition's chess-playing modes is that your AI opponent will never resign. Other top chess programs offer this feature, and it should be available as a toggle in Chessmaster.

Online play has some connectivity bugs that have plagued a large number of players--judging from the game's official message boards--though the developers claim that these issues will be addressed. If you're able to avoid connection problems, online play is straightforward and is well-laid-out, offering everything from quick games to tournaments.

The latest Chessmaster isn't the perfect program for hardcore chess aficionados. However, if you're looking for a good chess program that's packed with a plethora of features and all the bells and whistles, you'll be very happy with Chessmaster 10th Edition. 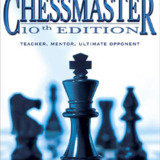