Chaser may not always be slick, but it offers loads of thrilling, old-school shooter action.

Some games are too clever by half. Today's technology allows game designers so much leeway for creativity that they sometimes get caught up in adding bells and whistles to a game without ever creating a core of fun gameplay first. With the near-future shooter Chaser, Slovakian developer Cauldron has made a game that might not be the flashiest out there, but is one with a whole lot of heart. It doesn't break much new ground, and it's not as polished as it should be, but it offers loads of thrilling, old-school shooter action.

Chaser opens with cinematic verve aboard a massive space station orbiting Earth sometime in the near future. As the opening credits roll, two small ships roar toward the station. As soon as they dock, armed troops in body armor and menacing masks pour into the station. Meanwhile, in a medical lab elsewhere aboard the station, the amnesiac hero of the game, John Chaser, suffers through frightening flashbacks as he lies on an examining table. The flood of disturbing images awakens Chaser, who's serving as some sort of test subject in an experiment we can only guess at. Just as Chaser groggily gets to his feet, the troops come barreling around the corner toward the lab. When they spot Chaser, they open fire, missing our hero but setting off a chain reaction that threatens the entire station.

And with that, the chase is on as you try to escape the station with your life. With a nod to Half-Life (and countless sci-fi movies), conduits burst around you, electric arcs from broken relay panels dance across the floor, and huge support beams coming crashing down around your head. As if that weren't enough, there seems to be an enemy soldier at every turn. Fortunately, you grab one of their guns early on, and for the rest of the opening level, you blast your way to freedom in one fast-paced firefight after another.

From there, it's back to Earth, where you get mixed up with the Mafia and the Yakuza, engage in countless fierce firefights in varied locales, do a little infiltration and espionage work, and ultimately head to Mars to uncover the secret behind Chaser's past. The story leads you into political intrigue at the highest levels, with an evil political and business cartel trying to eradicate rebel freedom fighters on Mars.

None of this is particularly original, but developer Cauldron knows how to milk a proven cliché for all it's worth. For instance, the opening sequence aboard the space station sounds--and ultimately is--hackneyed, but it's handled quite nicely. The intro cinematic is crafted with directorial flair, using some exciting camera angles and editing to create a fun action sequence that also shows just how confused the hero is.

The gameplay that immediately follows the intro movie is filled with nonstop action. Some shooters try to get fancy with all kinds of clever cutscenes, scripted events, and role-playing elements, and sometimes those work spectacularly. But ultimately, shooters are action games, and without exciting action, you don't have much to build on. Fortunately, you get into one blazing firefight after another during Chaser's first mission--and indeed in almost every mission. Guards pop out of doorways and ambush you from behind crates, and cross fire erupts at intersections. A warehouse shootout during a later mission is so over the top, so outrageously violent, that it would make John Woo proud. In another highlight of the game, you engage in a long, running gun battle in a luxury hotel. Glass shatters as grenades and bullets fly every which way, steam pipes vent with a hiss when they get hit, and blood splatters the walls as the bodies pile up. It feels like a cross between a Quentin Tarantino movie and the famous lobby battle in The Matrix. In fact, Chaser includes an "adrenaline mode" that lets you slow time like in that film or Max Payne. It's not necessary for success, and combat is usually more exciting at full speed, but it's a nice option to have for particularly tough encounters.

Chaser's villains aren't brilliant, but they act smartly enough to provide a real challenge. They'll frequently take cover, and they have aim that's good enough to keep you on your toes--or rather, keep you ducking behind pillars and crates. They're also placed very well throughout the levels to ensure some fun surprises. Between the placement of enemies and the frequency and pacing of the firefights, Chaser at times bears a surprising resemblance to Doom, but with smarter enemies and real-world weapons. That's no small praise.

Since Chaser is an old-school shooter at heart, you'll find just enough carefully placed body armor and health kits lying around for when you get shot up. You'll also find plenty of ammo, which further encourages wild firefights as you blithely unload whole clips into your enemies. Just as importantly, the gigantic levels are designed to encourage dramatic crossfires, and they're also set up so that you're almost constantly on the move. You rarely have to worry about getting lost or becoming stuck when you can't find an exit or can't solve some arbitrary puzzle. Here you mainly run, shoot, and then run and shoot some more.

As fun as all the combat can be, there's no denying that Chaser has some odd, awkward, or downright incoherent elements. One of them is that you encounter space ships and orbital stations, but you mostly fight with weapons of the late 20th century, like a Colt M4 assault rifle. It makes little sense, and it's kind of unfortunate that you get only a few semi-futuristic weapons to play with. But the real-world arsenal you do get has the benefit of familiarity--the wide assortment of pistols, submachine guns, assault rifles, and sniper rifles could have been taken from the latest Rainbow Six game. While they might be mundane, they're wonderfully modeled and allow for wild and brutal firefights, whether you're blasting some goon at point-blank range with a shotgun or launching a grenade into a crowd of bad guys and watching them fly.

The heart of Chaser is really its huge single-player campaign, which offers loads of gunplay but also some welcome changes of pace, like when you have to run unarmed like a wild man through a spaceport as security guards chase you. The game nonetheless does include some multiplayer modes, too: deathmatch, team deathmatch, capture the flag, and an objective-based mode reminiscent of Counter-Strike. While these aren't anything special, they're a welcome bonus.

Visually, Chaser is darn impressive for an unheralded game from a small developer. The proprietary CloakNT graphics engine smoothly renders absolutely enormous levels with highly detailed textures and convincing lighting. The character animations tend to be a bit jerky, and clipping problems mean that you can shoot a character and watch him fall to the floor and then fall through the floor. Despite problems like that, what's really impressive about Chaser is the developer's eye for visually dramatic scenes, like when you stand in a grubby futuristic slum at the beginning of the second mission. As you look up, enormous, gleaming skyscrapers provide a vivid contrast to the grime and graffiti at street level. But what really grabs your eye are the massive, fiery chunks of the destroyed space station from the first mission streaking through the atmosphere and slamming into the buildings overhead as sirens wail in the distance. Along with such set pieces, the kaleidoscopic, jump-cut flashbacks that afflict your character are cleverly done and genuinely surprising and creepy the first time they appear during gameplay. Despite clunky dialogue and a flimsy cyberpunk story, the lengthy cutscenes can also be fun to watch because of their slick, film-based visual style. (They load surprisingly quickly too, which is always a plus.)

Chaser's audio has its faults, but it's very effective overall. On the one hand, the voice-overs are suspect--the hero sounds like a bad John Wayne impersonator, for example. On the other hand, the music effectively matches the scenes and helps set the mood. Most importantly, the sounds of weapons fire, ricocheting bullets, and explosions are loud, powerful, convincing, and highly immersive.

These sorts of things help make the gun battles in this game genuinely visceral and exciting--much more so than in many shooters. On the other hand, with its hodgepodge setting, clunky story, and minor bugs, Chaser certainly isn't the slickest or most imaginative shooter out there. But despite its surface flaws, Chaser has what ultimately counts the most: a core of exciting, addictive action. 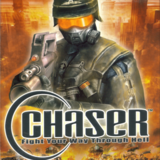