It's a solid game that's fun to watch, but it's no longer the only game in town.

Thanks to what was, at the time, a rather noncompetitive field, THQ's Championship Motocross 2000 quickly became the PlayStation's best motocross game. The game's 125cc, 250cc, and 500cc championships gave it a satisfying level of variety, while its arcade-style controls and fluid visuals turned it into an experience that was both playable and fun. Time passes and, as is often the case, the competition has caught up. In fact, despite a few improvements and innovations over the previous release, it is fair to say that Championship Motocross 2001 Featuring Ricky Carmichael doesn't command the top spot this time around.

The first thing THQ did to improve Championship Motocross was to expand the game's diversity. Unlike the limited championship and freestyle selections of the 2000 release, Championship Motocross 2001 includes single-race, championship, career, practice, and freestyle modes, as well as two-player single-race and championship competitions. In all, there are 24 different events to compete in and 28 different real drivers to choose from, including fan favorites Ricky Carmichael, Damon Huffman, and Jeff Emig. Courses themselves are based upon real-world locations, which gives you the opportunity to experience firsthand the true-to-life bumps and bruises levied by places like Budds Creek in Maryland, Clarkston in Washington, or Glen Helen in San Bernadino, California. EA's Supercross may have a higher number of overall options, but THQ's Championship Motocross 2001 is varied enough in its own right.

The gameplay within Championship Motocross 2001 is mostly unchanged from the previous release, which is to say the game is still realistic without ever becoming frustrating. Control is simple. On a basic level, all you really need to do is mash the X button to accelerate and wiggle the analog or D-pad controls to steer. However, if you really want to brutalize the corners, you'll have to acclimate yourself to the game's powerslide and jumping mechanics. Similar to the gameplay in EA's Supercross, holding down (back) gives you more air on jumps, while pressing the R1 button gives you the ability to perform tighter turns. On its own, Championship Motocross 2001 is a challenging game. If you're unfamiliar with the track or aren't used to the slippery mechanics of motorbike racing, you'll find yourself in sixth place quite quickly. To balance out its difficulty, the game incorporates a rather innovative rewards/garage system. Each time you win a race, garner a hole-shot bonus, or achieve a fastest lap time, you'll earn monetary rewards. This money can then be used to purchase engine, exhaust, tire, fuel, stabilizer, and gear upgrades. On the freestyle side of things, Championship Motocross 2001 isn't a thriller, but it holds its own with a smattering of arenas and more than 50 trick combinations.

Championship Motocross 2001 makes its greatest strides visually. Funcom has transformed what was already a fluid racing engine into a near work of art. Courses are gorgeously detailed, with a wide array of jumps, fences, grassy areas, and obstacles, which lend to the trackside realism. Far off in the distance, grandstands, mountains, forests, and other environmental features look every bit like their real-life counterparts would. A number of sponsor banners and logos pepper each track, giving the game that subtle X factor that any licensed sports game needs. Funcom didn't skimp on character models or bikes either. Whether you're playing as Ricky Carmichael or Tallon Vohland, you undulate and animate as if you're really a 180-pound human being who is being bandied about by high-speed motorbikes. Bikes themselves are faithful to the actual models they're based on, including the Kawasaki KX125 and the KX250 L3. A few cautiously used mud and gravel effects do a good job of stitching things together. Admittedly, the game is susceptible to the same minor texture warping and draw-in issues that plague every PlayStation motorbike game, but not on a detrimental scale.

It's too bad THQ didn't change the game's soundtrack much, because once again, an excellent array of motorbike sounds, dirt effects, and audience chatter is accompanied by the most laughable alternative soundtrack this side of the Pacific. Odds are you've probably never heard of bands like Guttermouth or Strung Out. If second-rate skate music is your forte, you might enjoy their contributions. However, for the rest of us, Championship Motocross 2001 has a handy music toggle sitting in the options menu. Turn off the music and pump up the sound effects--you'll be glad you did.

All in all, Championship Motocross 2001 Featuring Ricky Carmichael shows exactly what happens when the initial entry of a series rocks so hard. Other companies steal ideas, and come up with innovations of their own as well, so what was once a superb game either evolves or stagnates. Championship Motocross 2001 does a little of both, unfortunately. It's a solid game that's fun to watch, but it's no longer the only game in town. 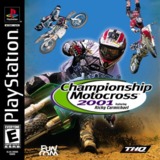 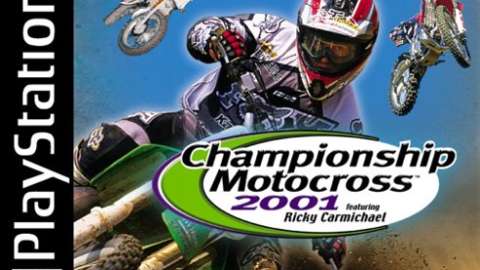 It's a solid game that's fun to watch, but it's no longer the only game in town.