"A game about climbing a mountain."

Spoilers for Celeste are contained in this review. While no specific plot details are mentioned, overall themes and mechanics that you may not be aware of are discussed. Celeste is a wonderful, surprising game, and I think it's best experienced without prior knowledge of its themes. Hence, if you want to go in completely fresh, go and play Celeste before reading this review. Otherwise, carry on to find out why this game is worth your time.

Despite appearances, Celeste is much more than a game about climbing a mountain. Celeste is a game framed around a challenging platformer but containing a powerful tale of recognizing, dealing with, and attempting to overcome mental illness. Parts of Celeste are challenging to play--in both its gameplay difficulty and its subject matter--but it is a memorable experience worth seeing through.

Playing as a nervous young explorer named Madeline, you're on a self-imposed mission centered around climbing the titular mountain, Celeste. You're warned from the outset that the mountain is a strange place, that you might see things you're not ready to see, but that it will show you who you really are. While the adventure starts relatively simply--jump this gap, grab this ledge, gather this collectible--the mountain soon lives up to its otherworldly billing by realizing Madeline's mental health issues.

Her anxiety and depression are personified into an alternate version of her, simply named Part of Me, that exists purely to place doubt in her mind, to confuse her, and to tell her she cannot succeed. This occurs both in dialogue and in gameplay, where Part of Me often acts as the primary antagonist. However, Part of Me isn't doing this out of spite; she argues she's trying to save Madeline from what she perceives as certain death--Madeline is not a mountain climber, after all.

Madeline meets other characters along the way whose own issues manifest themselves in-game as physical prisons from which you must escape or enemies you must defeat. Rarely do games tie themes and mechanics together so well; combined with a sometimes crippling difficulty level, they accentuate the feeling that you, the player, are on a struggle of your own, as well as enhancing your level of empathy towards Madeline. Seeing her suffer is difficult to handle, and it's impossible to watch it happen without thinking of your own problems, but that--plus the brilliant merging of gameplay and narrative--is what makes Celeste so emotionally powerful.

Parts of Celeste are challenging to play--in both its gameplay difficulty and its subject matter--but it is a memorable experience worth seeing through.

The only disappointing aspect of this translation of mental struggle into play is a clumsy addition of a new movement mechanic towards the story's end. The new mechanic itself is utilized intelligently for the remainder of the campaign, but the way in which it's added--at a key moment in the plot--somewhat weakens one of the story's most powerful elements. The finale itself, however, is a wonderfully understated and fitting conclusion that I won't spoil here.

Save for that heavy-handed development, Celeste grows graciously over the course of the roughly seven-hour campaign. It starts off as a slow, traditional platformer, but as new mechanics are added and as your own skills develop, it becomes an intricate, breakneck dance. You might have to jump around one set of spikes, dash over a pit, bounce off the back wall, leap through a warp panel, and fly to the next platform, all without a safe spot to land. But even though each step is tricky, checkpoints are frequent enough (and restarts instant enough) that failure never becomes too frustrating, all while the difficulty is sufficiently high to make success satisfying. I died 975 times, but none of those casualties felt unfair, and almost every one taught me something new. Even though Celeste doesn't introduce any mechanics that haven't been seen in other games, its platforming is wonderfully refined and inventive--often leaving me puzzled as to how I'll ever succeed, only for the solution to suddenly enter my head--and it's all contained within a campaign unlike anything else.

After the credits roll, Celeste offers more for those who want to relive the journey. Aside from the usual collectibles scattered in various hidden or hard-to-reach locations, there are also a set of unlockable reworked levels, dubbed B-Sides. Be warned, however: these offer some of the most difficult sequences in the game, and like an unfathomable post-game that offers a locked door with seemingly no way in, they lie unfinished on my level select screen.

Finally, Celeste's sheer beauty is worth mentioning. Its colorful 8-bit style will be familiar to those who played developer Matt Makes Games' previous platforming title, TowerFall: Ascension, but in Celeste that is joined by a cleaner, more modern look that elegantly adorns the game's menus, overworld, and end-of-chapter artwork. In-game, as Madeline's world becomes more twisted and horrific, so do the game's art style and environments: bright blue ice and golden skies turn to blood-red monsters and greying surroundings. The piano and chiptune-heavy soundtrack adapts in a similar fashion, moving from the serene to the spooky at the perfect moment, all while remaining forever catchy.

It's a testament to convincing writing and ingenious design that after playing Celeste I felt like I'd been on the same journey as Madeline. Her struggle is one made easy to empathize with, her low points painful to watch, and her high notes exhilarating to experience. Her tale is delicately told and beautifully illustrated, confidently coalescing with the satisfying, empowering game it lies within. Not bad for a game about climbing a mountain.

View Comments (38)
Back To Top
9
Superb
About GameSpot Reviews 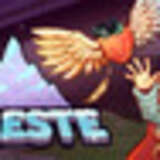 Oscar completed Celeste's main campaign in a little under seven hours, but the adventure within will stay with him for much, much longer. Matt Makes Games provided GameSpot with complimentary copies of Celeste for the purposes of this review.