Cel shading was a novel form of approaching graphics when first introduced in games such as Jet Set Radio and Wacky Racers. This cartoonlike approach to visual style lends itself naturally to certain types of games, and at first glance, Cel Damage appears to be the most impressive use of cel shading yet. Cel Damage is vehicular combat of the demolition derby sort--what sets it apart from other games in its class is how it attempts to emulate a slapstick cartoon show, in which a cast of unique characters smack each other around with comical weapons to win over the viewers (or appease their own sick and twisted desire for violence).

Visually, Cel Damage is an impressive experience. The characters, their vehicles, and the active landscapes are all well drawn and nicely animated--with a touch of temporary suspension of disbelief, you can easily think that you're playing a real-time cartoon. Introductory movies allow you to get to know the cast of characters and their vehicles, and while some may argue that they are derivative and simple, they are most assuredly easy on the eyes. There are six characters to begin with, including an Elvis-impersonating construction worker, a duck frozen in time as a Tommy-gun-toting '30s mobster, and the consummate bespectacled nerd--or rather, boy genius--for the politically correct. It's a shame that there are only four different landscapes to choose from, which include the desert, jungle, Transylvania, and space, because it would have been very interesting to see what the artists could have done with a city-based level. In fact, after only a handful of hours, you've seen and heard everything that Cel Damage has to offer. Across each of the different levels, you can take in the Warner Bros. feel and admire the details, like boulders that erupt in clouds of smoke when destroyed or space fungi that chime as they act as pinballesque bumpers, each sending you careening into another. Aside from a number of amusing taunts and death messages, the sound effects and music are simply passable.

Cel Damage offers Quake-style gameplay, albeit greatly modified to fit the game's vehicular nature. Aiming at targets is a nonissue; instead, the control is focused on evasive maneuvering and lining up opponents with the area of effect of your current weapon. The control is intuitive and responsive, albeit severely dumbed down. At any one time, your racer can carry only a single weapon, essentially turning Cel Damage into a one-button game. The other buttons allow you to honk the horn or unleash a signature taunt, but some real variety would have been much more welcome.

Each character is outfitted with a default weapon, which is essentially useless. Firing at two battling CPU opponents with the basic ranged attack will serve only in getting you blown up or sliced in half, so it's best to always race for the power-ups--or rather, that map's one useful power-up in particular. Aside from your character's personal weaponry, there are a number of weapons littered across the various maps, although any one map never features more than three or four. These weapons include the baseball bat, chainsaw, chain gun, ax, boxing gloves, freeze ray, and grenades. There are other weapons strewn throughout the game's dozen levels, each with different characteristics. All of the weapons have their own uses, be it for disabling an opponent, or simply destroying them, but from what we've seen, some are grossly overpowered in comparison with others. The ax and chainsaw in particular are one-hit kill weapons and thus extremely unbalanced in nature. While the comparison may be made by some to the rail gun in Quake, it's entirely inappropriate--it takes considerable skill to use a rail gun efficiently, while the one-hit kill melee weapons in Cel Damage are far too easy to use, especially considering how useless the other weapons feel in comparison. Thus, matches in Cel Damage become extremely repetitive races to pick up the "good weapon," and the only challenge becomes the number of opponents you can slice in half before someone else gets you. It doesn't help any that you can hold only a single weapon at a time.

There are three modes of play--the deathmatch mode, or smack attack, is the only one available at first, but you can pretty quickly unlock the gate relay and flag rally modes. Smack attack is a race to a set number of smacks, which you are rewarded for hitting your opponents with weaponry. Destroying them entirely garners you a much larger number, so it's best to race for the more powerful weapons and cut a swathe through as many toons as possible. Gate relay is a back-and-forth race through two checkpoint markers, similar to the shuttle run that kids have to do in elementary physical education--and almost as grueling. The flag rally mode is similar to capture the flag, except it's every toon for himself or herself, with a central zone that all players will be trying to reach for to score. There is no designated single-player game or story mode--instead, you can play these three game modes against a full cast of bots and attempt to clear the three games in all 12 stages, earning the chance to play as the four boss characters, as well as the ability to swap personal weapons between characters.

When four players get together, it can be fun for a while, since you're all experiencing the same enticing visuals and enjoying the comic value that certain aspects of Cel Damage offer. The addition of bots to the multiplayer game ensure that the amusing cast is always well represented, and the game never bogs down, even in the four-way split-screen mode. Sadly, the shallow gameplay ensures that the game gets really old, really quick.

The standard for vehicular combat has been set extremely high by Twisted Metal: Black, and this latest generation of multiplayer games has become so thoroughly enjoyable that Cel Damage simply fails to measure up. The lack of a dedicated single-player game, the bland weapon selection, and the repetitive nature of the action undermine the strength of Cel Damage's attractive graphics. Xbox owners disenchanted with first-person shooters and minigames may want to try out Cel Damage to satisfy their multiplayer needs, and it most assuredly can be fun for younger players. However, the more discriminating game enthusiasts will likely be more satisfied spending their gaming dollars elsewhere. 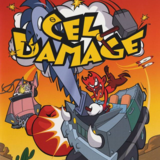