Catherine: Full Body Review - One Step Closer To The Edge

Just when I thought I was out, they pull me back Rin.

Imagine that you wake up one morning and, to your horror, discover that you had inadvertently committed an act of infidelity. Think about the kind of confusion and dread that might race through your head at that moment. How did it happen? What the hell are you going to do? How on earth are you going to explain and amend the relationships with all parties involved? What kind of deep-seated anxieties might have led to this moment? In 2011, Atlus' Persona studio explored this predicament with Catherine, using a peculiar blend of social simulation and Sokoban-influenced action-puzzling. Eight years later, Catherine: Full Body is a remaster that demonstrates how well the game's distinctive premise and exploration of adult themes still hold up, even if its new additions to the plot don't fit in seamlessly.

Vincent is a 32-year-old man in a long-term relationship with his girlfriend, Katherine, and at a stagnant point in his life where he isn't exactly sure what he wants for his future. His core group of friends are in different circumstances, but they share similar dilemmas; being in your thirties is hard. Vincent has recently found himself plagued by frequent nightmares of scrambling up a crumbling tower, and he's losing sleep and in a constant haze because of them. One morning, after a big night of drinking, he wakes up next to someone who is absolutely not his girlfriend, and what follows is a frantic, weeklong crusade to try and deal with the repercussions and decide what he wants to do with his life before Katherine can discover what's really going on.

Central to Vincent's coping process is his aforementioned core group of friends. Every night after work, they all get together at their local bar, The Stray Sheep, to hang out. It's in these regular social scenarios where Vincent can confide in his friends, talk through his state of mind, sound off on his next course of action, and, hopefully, find a resolution. The conversations between characters are mostly predetermined, though the onus to spend Vincent's limited time having them is on you. A key component which you do have influence over, however, is your cell phone. Vincent will regularly be contacted throughout the night (by Katherine and his new fling, Catherine), and how you choose to respond to their text messages and calls, if at all, will impact Vincent's ethical compass--represented as a meter with opaque binaries.

Time ticks along as you perform actions in the bar, and its patrons will come and go. You can skip these social sections entirely if you wish, but doing so robs you of the game's most engrossing component. Vincent's journey is a deeply introspective one, and though the plot's major beats unfold in the cutscenes that bookend each day, the nuances of his character come through in his interactions with other people. Managing Vincent's connection to his phone, and, in turn, how he treats the women in his life from a distance, sways how he might later react to significant plot points and revelations. Getting to know Vincent's deeply flawed but sympathetic friends, as well as peeling away at the backstories of the other bar patrons as the week goes on, helps to explore themes revolving around maturity and the nature of human relationships. Full Body's inclusion of the Japanese vocal track also provides an interesting and different take on character performances if you've already experienced the English version before.

The ebb and flow of your social actions--chatting to your friends, ordering another drink, checking your phone intermittently, and spending time with Vincent's idle thoughts--make the ritual of whittling away time at the Stray Sheep strangely satisfying in its mundanity. The evocative soundtrack helps to foster this relaxed contemplative state, as does the game's holistic but understated audiovisual style. It's an incredibly pleasant atmosphere to be in, and it succeeds in replicating the quiet delight of spending a night drinking with friends with no particular occasion.

It's nice to have that safe haven, because when Vincent goes home to bed each night, the nightmares start, and that's when things get really stressful. What's causing the nightmares is a mysterious unknown at first, but from the outset, it's clear that they act somewhat as a lucid metaphor for Vincent's internal strife. You need to guide Vincent up a sheer, crumbling tower constructed entirely of cubes and other cuboids, sometimes while being chased by a monstrous personification of one of Vincent's objects of anxiety. The tower is rarely more than three cubes deep, and while its construction might sometimes form a natural staircase for Vincent to climb, you'll frequently need to create a path upward yourself by pushing and pulling the cubes around in strict, grid-based arrangements.

This task quickly escalates in difficulty, as the sheer tower faces become higher and harder to navigate. There will be fewer pieces to work with, while blocks with unique properties will also appear, such as being immovable or shattering after being stepped on twice. These scenarios stop you from creating an ordinary staircase, and they force you to think of more unorthodox ways to arrange and move around the tower. Vincent can hang on the edges of blocks, and blocks will support each other so long as a horizontal edge connects; both these rules are fundamental to many of the techniques required to work your way up.

Finding that potential path takes careful consideration and forward-thinking, and this can be nerve-wracking. You need to keep up your momentum, lest the stage crumble under your feet and you fall, and the soundtrack--rousing renditions of an inspired selection of classical pieces--ratchets up the urgency of your ridiculous predicament to a high degree. It's very easy to put yourself in a dead-end situation, even with the game's generous undo mechanic, and at times you might stare at the pieces you have to work with for what seems like an eternity without any inspiration. But when you do have a sequence of moves in mind, successfully put them into practice, and start flying up the tower without pause, that sense of mastery and accomplishment is incredibly exciting.

This remaster also includes a number of additional difficulty options and assists, however, if reaching those moments of elation are too few and far between. These include, among other things, a "Safety" difficulty level, which eliminates failure, and an auto-climb option that can be disabled on a whim. Catherine's puzzle difficulty does spike in places, so it's a boon over the original for anyone who wants to keep up the momentum with Vincent's story. If you love the puzzles, though (and I certainly do), Full Body also includes a handful of additional modes, which dramatically increase the amount of available stages. The story mode offers a "Remix" variant featuring new block types and stage layouts; the in-game "Rapunzel" arcade cabinet boasts a buffet of new stages in the same vein, too. Babel returns as a discrete puzzle mode with challenging, randomised stages for one or two players, and there's also a head-to-head competitive mode with local and online options. There's a lot here, but the biggest addition to Catherine is the inclusion of another potential love interest for Vincent, named Rin.

While Katherine is sensible and Catherine is uninhibited, Rin acts as a sheepish but wholehearted personality for Vincent to fawn over. She's introduced right from the get-go and woven into the game's existing story beats, both in new cutscenes and into the social segments at the Stray Sheep. However, perhaps unsurprisingly, Rin's integration isn't an entirely seamless one.

On a superficial level, story moments involving Rin will often play following whatever cinematics were part of the original game, and with that come some pacing issues. These new scenes have a strong, stylish direction, featuring more interesting edits and creative shot compositions than existing ones, but they unfortunately make the rhythm of cycling between social simulation, nightmare puzzles, and stretches of cinematics feel a little unbalanced. More significantly, though, the integration of Rin completely dismantles the game's enigmatic sense of mystery.

If you've played the original version of Catherine through to one of its many different endings, then you'll have at least some idea of how Vincent's real-world difficulties and his nightmarish tribulations are related. However, it was previously hard to get any tangible sense of how things might fit together until the original game's penultimate chapter. Conversely, as soon as Rin appears on screen in Full Body, it is immediately clear that something is amiss, and this feeling of peculiarity is ever-present whenever Rin is involved in a scene. Even though her arc is an enticing new mystery in itself, and does feel additive to someone who already knows everything about the original Catherine's narrative, it's a shame. As soon as Full Body starts, Rin acts as a big, flashy distraction from the largely grounded and plausible story that Catherine revels in during its real-world sequences for most of its running time.

Chasing Rin through the new branching path in the story feels a little inelegant overall, too. Actively choosing to pursue either Catherine or Katherine as Vincent's ultimate goal always feels like trying to hit a moving target. Trying to push Vincent in a certain direction on the game's ethical meter was difficult because of how hard it was to decipher which choices represented what--not just in Vincent's text messages, but also during the series of confronting "confessional" questions that you're asked in-between nightmare levels (eg. Would you rather kiss an alien or a corpse?). Pursing Rin feels far more blatant--a series of questions are flagged upfront as opportunities to "break" the meter and set off on a whole new path.

Once you do break onto that new path, things go to some fascinating places. But the broad feeling of the new story branch is that it feels, well, too broad. Rin's enthusiastic earnestness rubs off on the direction of the new content a little too much, and even though the scenarios posited are genuinely interesting to see unfold, it lacks a more grounded subtlety that invites a similar level of contemplation to the existing branches for Katherine and Catherine. What's more dismaying is that the ultimate conclusion to Rin's story branch actually feels like it undermines the otherwise positive themes the new chapters work so intensely to convey, seeming to suggest that the kind of love that Rin and Vincent can potentially share is fantastical in nature.

But Rin's presence still brings an intriguing new edge to Vincent's crisis, and Full Body still tells a fascinating, personal tale. The nightmarish block puzzles are still weirdly intense and satisfying to surmount, and the Stray Sheep is still a wonderful bar to spend your nights in. Full Body does a great job in refining and refreshing the Persona studio's fascinating foray into the social lives of adults, and Catherine continues to stand out as a game that feels both incredibly bizarre and authentically intimate. 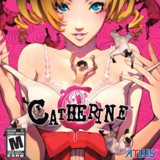 Being over 32, Edmond has naturally already solved all the problems in his life. He is an Atlus Game Liker who played through the original Catherine numerous times and played Full Body for around 40 hours to save all the sheep, see every ending, and play every mode. Review code was provided by the publisher.