It isn't a horrible game, but other than offering a strong simulation aspect, there's not much there.

Electronic Arts has proven with the Moto Racer series that it knows what a good motorcycle racing game is. That's why it is so disappointing to see that Castrol Honda Superbike is so noticeably inferior. It isn't a horrible game, but other than offering a strong simulation aspect, there's not much there.

Castrol Honda Superbike, as the name implies, is a racing game that exclusively features real Honda RC45 racing bikes that you can race on 14 real tracks from around the world. The game has several different settings that let you customize your bike. Most notable are the different sprocket settings that let you change your bike's gear-ratio settings. Each gear can be adjusted so that you can tailor and maximize your motorcycle's performance for each track.

The control of the bikes is actually quite good, especially when using the Dual Shock controller - one stick steers the bike while the other adjusts your speed. The bike reacts as it would in real life, which means that when you're going around a tight turn you must take it at a reasonable speed so your bike doesn't go slamming into a wall. If this is a problem for you, the game does offer six different difficulty settings, some of which have options that help steer your bike for you while you turn, as well as reduce your bike's speed so that you can make the turn. The AI of the track's seven computer-controlled bikers isn't anything special. The bikers just race along the course in a standard staggered style so that at just about any point in the race you have someone to directly compete against. If you do decide to race this other player, the game features a two-player head-to-head split-screen mode.

Visually, the game isn't that impressive, especially when compared with Moto Racer 2, Electronic Arts' Motorcycle racer that was released last year. The riders look a little too polygonal, and their motions aren't all that realistic. Take for instance the animation of your rider falling off the bike when you crash into a wall or when he's laying the bike down on it's side when going too quickly into a turn. The rider comes off the bike as if the hand of God reached down and plucked him off the bike without letting him move a muscle. Most of the rider's basic animations look more than a little awkward as well. The tracks themselves look decent, and the game doesn't suffer from too much pop-up.

In the audio department, the game is nondescript, especially since there isn't any music during the races. The effects and engine sounds are fairly authentic but don't really keep you company during the races.

The only players this game would really appeal to are bike-racing fanatics, who are really into the sport. Players who aren't won't appreciate the extremely real-world bike physics that make you take corners at very low speeds. The rest of us, who just think motorcycle-racing games are fairly neat to play from time to time, should just stick with Moto Racer 2. 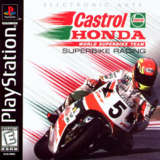