Taken together, the three games included in Castlevania: The Dracula X Chronicles make up a compelling package.

Castlevania: The Dracula X Chronicles for the PSP collects two (or three, depending on how you look at it) separate installments of Konami's Castlevania series together on a single disc. The formerly Japanese-exclusive Dracula X: Rondo of Blood represents two of the three games on the disc. You can play this old-school classic in its remade form, which features 3D graphics and newly recorded music and voice acting. Alternately, you can play it just as PC Engine CD-ROM owners experienced it back in 1993, with its original music and 2D graphics, as well as your choice of the original Japanese dialogue or a new English translation. The third game on the disc is a rendition of Castlevania: Symphony of the Night that boasts some miscellaneous improvements over the PlayStation and Xbox 360 versions you might already be familiar with.

Rondo of Blood was the last level-based Castlevania produced before Konami shifted gears to the interconnected rooms found in recent installments. In it, you control either Richter Belmont, a vampire hunter armed with a whip, or Maria Renard, a young girl that tosses doves at her enemies, and guide your chosen hero through side-scrolling levels populated with bottomless pits, surprise traps, and loads of creepy monsters. Both characters have a no-nonsense repertoire of moves: they can walk, jump, and unleash an attack directly ahead, as well as make use of various projectile subweapons. Richter has more health than Maria, but he walks more slowly and his backflip-style double jump is tougher to use. Conversely, Maria's speed and traditional front-flip double jump make her easier to use, but her miserly stamina means she's dead meat in two or three hits. At the end of each level, you'll match skills against a boss based on a familiar horror villain, such as a werewolf, the headless horseman, or Dracula. "Skill" being the operative word, because this game is absolutely abundant with precision jump sequences, double-team situations, and other stamina-sapping hazards that will cause you to mutter profanities as you die repeatedly while learning the layout of each level.

Rondo's old-school sensibilities are obvious. Richter walks at a decent pace, but he practically crawls up and down stairs, and you have to push up on the control pad just to get him to ascend them. Otherwise, you'll fall right through. He also gets knocked back when hit by an enemy, which, coupled with the stair thing, means you'll endure plenty of cheap hits and punts into deadly traps as you work toward honing your skills. It sounds like self-torture, and it sort of is. However, the payoff for memorizing each level back to front is that you get to see some truly inspired level designs and participate in one memorable boss fight after another. You won't forget rafting the rapids and dodging vine-swinging skeletons in the jungle, or the first time you slay the blue serpent only to discover that you actually killed only one of the towering beast's four heads.

The Choose Your Own Adventure-style level progression and the forgiving save system also help take some of the edge off. You need to work through nine levels to reach Dracula, but many of those levels offer branching paths and optional areas to explore, and those optional areas often lead to different bosses or alternate levels that replace the ones you'd normally visit by following the linear path. All the while, the game automatically keeps track of which levels you've played and lets you restart from any of them whenever you like. So, if there's a particular level that's trying your patience, you can seek out an alternate path or keep chugging away until victory is yours.

For the most part, the 3D graphics in the remake look nice. There's loads of detail evident in both the enemies and the backgrounds, and the backdrops convey a much grander sense of depth than the traditional 2D backgrounds in the original. Your attention will be drawn to the fires burning off in the distance, and to the streams that flow in from the background and cascade into the bottomless pits in front of you. As you walk through a massive, round library in one level, you can't help but ponder how cavernous the gilded, candle-lit room is. Some bottomless pits are hard to notice because they blend in with the innocuous scenery, but you can avoid any unfortunate mishaps by making it a point to remember that water is generally just as deadly as spikes or a black void.

The 2D graphics in the original game are nothing special, even by 1993 standards, but the backgrounds are sufficiently detailed, and certain enemies are positively mammoth. All of the different transitions where enemies and bosses leap in from the background are also attention-catching the first couple of times you see them. Overall, the emulation is spot-on. The music and sound effects are loud, and the graphics are presented in their original resolution in the middle of the screen. It's hard to see dark-colored enemies in those stages that have dark backgrounds, but that unfortunate pairing really happens only in small sections of two different levels.

Konami's developers made good use of the CD-ROM format when crafting Rondo of Blood. Anime-style cinematic scenes, complete with voice acting, appear in certain locations. Purists can choose to listen to the original Japanese dialogue and view English subtitles. Everyone else will probably be very satisfied with the recently recorded English voice work, which comes across as a little dramatic and a little cheesy, just the right sort of stuff for a game about vampires and the people that hunt them. And the soundtrack--the soundtrack consists of an awesome mix of classical instruments and synthesizers that harkens back to the glory days when Brian Eno and Vangelis were still composing music for Hollywood movies.

For the 3D remake, Konami decided to kick the presentation up a notch. Incidental transitions that were once simple 2D effects have been transformed into dramatic 3D scenes that show the bosses smashing through the scenery as they make their grand entrances. A number of new dialogue scenes have been added, along with the necessary voice work, all of which let players get a better feel for the overall story. As they do in the 2D version's conversational scenes, the actors deliver their lines smoothly and with tongue firmly planted in cheek. Konami also re-envisioned the soundtrack by doing away with the synthesizers and instead presenting familiar Castlevania themes through a mixture of traditional symphonic crescendos and operatic vocals. Furthermore, they replaced the old nondescript slash-and-thud sound effects with a more atmospheric assortment of metallic clangs and spooky screams.

Even though the two versions of Rondo of Blood share the majority of levels and bosses in common, they both feel like separate, individual games. Part of that is because the different graphics, music, and voice acting lend each version its own unique style. Aside from those differences, the two games are also actually quite different in terms of control response and pacing. The controls in the PSP remake are quick to respond, whereas backflips and split-second attacks are harder to pull off in the 2D version. Additionally, the bad guys in the remake move just a bit slower than the nasties in the original, which means you have more time to plan and react to hazards in the remake. Generally speaking, the remake is the easier of the two versions to get into and go deep in.

The third game on the disc is Castlevania: Symphony of the Night, which you may already be familiar with, though you might not realize that it's actually the sequel to Rondo of Blood. The story picks up four years later and puts you in control of a new vampire hunter: Dracula's own son, Alucard. However, Richter and Maria aren't out of the picture. As you explore Dracula's castle, you'll occasionally run into them and strike up conversations. Eventually, you'll be able to add both of them to the list of playable characters.

Symphony of the Night was a milestone for the Castlevania series for numerous reasons. It was the first game to drop the level-based format and adopt a Metroid-style layout of expansive, interconnected rooms. Like in Metroid, you'll frequently encounter switches and breakaway walls that let you access new areas. It was also the first game in the series to really go wild with its role-playing aspects. The enemies you kill sometimes leave behind weapons and clothing that you can equip, and the experience you gain from hacking up those respawning foes automatically causes your character's stats to build. All throughout the castle, you'll meet and gain the trust of so-called familiars, which are creatures that you can summon to fight alongside you. Meanwhile, defeating bosses increases your life meter and occasionally grants you new powers, such as the ability to transform into a bat or a cloud of mist. That wealth of variety is the main reason why Symphony of the Night hasn't lost any of its magic in the 10 years that have passed since its initial release on the original Sony PlayStation. Of course, the fluidly animated 2D characters, the liberal use of 3D graphical elements on top of the 2D backgrounds, and the fully orchestrated soundtrack also don't hurt.

For the rendition of Symphony of the Night that's included on this disc, Konami fixed a few trivial bugs and added Maria to the list of playable characters. They also came up with a new script translation and recorded new voice dialogue to replace the literally translated, stiffly delivered lines that plagued the original game. As intended, the new script reads more naturally, and the new cast of voice actors manages to deliver their lines smoothly and with appropriate inflection. If you've already played through the game before, you'll want to play through it again here just to see how much better the experience is when the dialogue doesn't seem so wooden.

When you first pop in the disc, the only game that's immediately available is the 3D remake of Rondo of Blood. The other two games are locked until you locate and collect the items in the Rondo remake that unlock them. If you play through normally, it could take you hours and hours to find those hidden game icons, given that they're situated in hard-to-reach spots along alternate level pathways. Of course, if you're the impatient sort, you can always cheat and visit your favorite gaming website to read tips that reveal exactly where those icons are located. In any case, it seems kind of cold-blooded that Konami is forcing players to put in some legitimate effort to access two-thirds of the content on the disc, especially when the original Rondo and Symphony of the Night are mentioned so prominently on the back of the box and in the user's manual.

Cold-blooded or not, Konami has put together a solid package in Castlevania: The Dracula X Chronicles. On a single disc, you get two ways to enjoy one of the more elaborate old-school Castlevanias, as well as a linguistically upgraded rendition of the game that started the current trend of Metroid-inspired Castlevanias. That's a pretty sweet deal for the $30 asking price. 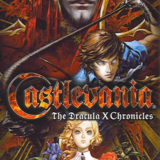