A few adjustments to the tower defense formula make CastleStorm a game to remember.

People either understand the appeal of the tower defense genre or they don't. To one person, the endless procession of enemies in search of a conquest represents an exhilarating opportunity to face off against overwhelming odds and to finally emerge triumphant, time after satisfying time. To someone else, the genre all too often offers only tedium. There's too little variety, no competitive element, and not nearly enough action. Occasionally, though, a new game presents a fresh take on the timeworn mechanics, one that has the potential to delight veterans and newcomers alike. CastleStorm, a new release from Zen Studios, is one such game.

Your primary goal in CastleStorm is to protect your castle from invading forces. In this case, those forces are aggressive Vikings who hope to use a pair of powerful crystals to enslave the world. As the mostly inconsequential story begins, one half of the required pair is located deep within your castle. Predictably, you have to stave off a seemingly endless army of goons if you want to survive long enough to find a way to end the bloodshed.

CastleStorm's most important twist is that you aren't limited to a purely defensive role. A typical map includes castles along both the left and right edges. Each of those structures is armed with a ballista that can be used to bring down rival troops, or to unleash shrapnel on the structure that spawns them (a process that feels reminiscent of Angry Birds, minus the pigs). If you can topple your rival's tower quickly enough, you won't even have to worry about planning for long-term survival. Missions offer varying objectives, but in general, you win either by knocking down your rival's front gate and stealing his flag or by reducing his glorious castle to a pile of rubble. As an added bonus, destroying individual rooms makes the overall structure less productive. Destroying a cellar stops a food production buff, for instance, and annihilating an architect's chambers decreases the building's defensive capabilities. Multiple paths to victory mean that the game remains fresh for longer than it otherwise would, and a single strategy won't conveniently carry you to the end of the campaign.

Besides ordering troops and hurling javelins, stones, bombs, explosive sheep, and other such projectiles at a rival's castle, you can activate as many as five unique spells over the course of a battle. These special abilities typically have a cooling period you must wait through before you can use them again, as does most of your ammunition. By managing each element well, you can really change the tide of battle, particularly if you're smart about when you summon your hero to the fray. Once you drop him on the battlefield, you control him directly as he slashes and shoots his way through whole enemy groups until his timer or life meter drains. Summoning a hero is a great response to situations when weaker enemies such as wolves and foot soldiers manage to sneak past your broader defenses.

There's much to keep track of in CastleStorm, but the control scheme is typically up to the challenge. Each attack method that you might care to employ is assigned to a single face button, making it a cinch to swap one for another as needed. Within those categories, individual units are then selected by pressing the bumper buttons so that you can easily control as many as 15 different elements without constantly needing to sort them. As an example, you might fire a stream of javelins at a castle wall while you wait for enough resources to be accrued that you can summon a griffin. Then you tap the appropriate button twice, and out flies your winged beast. Meanwhile, you've already switched back to your ballista, or perhaps you've quickly cast a spell. Once you familiarize yourself with the controls, nearly everything is handled effortlessly.

The lone awkward exception within the otherwise manageable control scheme is the ballista itself: it's difficult to handle because precision aiming in the heat of the moment is such a challenge. The D-pad enables tweaks once you're pointed in the general direction you want to fire, but you often have to hold a button to make any obvious changes, and then the trajectory might be radically altered for no apparent reason. In some cases, you can wind up wasting so much time fiddling with your aim that an enemy will sashay through a barrage of wild last-minute shots. Such unfortunate moments are infuriating, to say the least. They negatively impact an otherwise terrific experience.

As you progress through the game's single-player modes, you regularly access new weapons and additional room types for your tower. Each new element can be permanently leveled up using experience points that you gain by completing story missions and side quests. If you find yourself stuck in a challenging stage, you can revisit earlier quests, essentially grinding the way you might if you were playing a role-playing game. There's also an editor that lets you customize your castle layout, if none of the available structures suit your tastes. That option had the potential to be quite cool, but you'll probably find that the default buildings work just fine and look more interesting.

On that note, the developers really did a great job of making sure that everything is attractive. Character models are vividly drawn and easy to tell apart, even when you have the perspective zoomed out for strategic purposes. There can be a lot of activity onscreen with no ill effects; two huge towers can crumble apart one piece at a time while volleys of arrows and shrapnel fly back and forth between them with nary a hitch. Audio provides excellent cues that complement the action nicely. For instance, your men yell for cover as you instruct them to duck enemy fire, and the sound of a tower finally crumbling to the ground is always a treat. Stirring musical selections play in the background, as well, keeping the presentation suitably epic from beginning to end.

If the main campaign gets old, there are still reasons to keep playing. Survival mode lets you face the endless waves that you would expect from the genre, and in Skirmish mode, the first general to destroy a building or claim a flag is the winner. If you like to play with friends, you will be pleased to find that the game also offers those supplemental modes in multiplayer variants. You can play locally with a buddy on a horizontally split screen, or you can log on to Xbox Live and seek out strangers. Appropriately, any units that you may have strengthened while playing offline must start from scratch when you take them online, but you can gain experience points and make them stronger as you start racking up victories. The online options offered ensure that your competitive experience isn't limited to merely leaderboard rankings, as is all too often the case.

CastleStorm's well-executed twists to the tower defense genre make it a unique game with something to offer a variety of players. The occasional control issues are regrettable but hardly insurmountable, and the blend of offensive and defensive objectives and the competitive play are sufficient reasons to overlook that minor flaw as you happily commit yourself to the task of ruining the marauding Vikings' day. 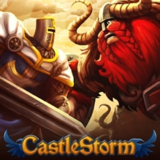 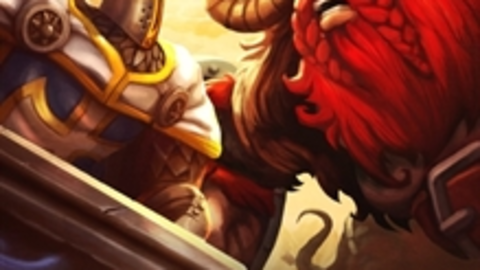