Good things come in cheap packages if Castle Shikigami 2 is any indication. This arcade-style shoot-'em-up features a unique premise, lots of tough levels, and good variety.

If you were to judge this book by its cover, you'd figure Castle Shikigami 2 must be some kind of low-rent role-playing game, what with the smattering of generic anime characters on the box and the $10 price tag. In fact, it's a high-quality vertical-scrolling shoot-'em-up in the vein of old classics like Raiden or newer ones like Ikaruga, and it's the follow-up to 2003's obscure Mobile Light Force 2. First of all, the fact that there's a new shoot-'em-up for the PlayStation 2 is automatic cause for some celebration, since this once-hallowed styled of gaming--though it remains as purely action-packed as ever--simply isn't as popular as it used to be. More importantly, though, Castle Shikigami 2 is a great game for that measly $10. It's plenty challenging, relatively long for a shoot-'em-up, and loaded with more than half a dozen different playable characters. Plus, you can play it together with a friend, too.

Shikigami are the Japanese equivalent of a sorcerer's familiars: They're spiritual assistants. In the game, rather than pilot a spacecraft as in a typical shoot-'em-up, you instead take control of a magically imbued human character of some sort, who'll be flying high above the Tokyo skyline in "2006, the distant future," as the back of the box puts it. Each character is functionally equivalent to a fighter spacecraft, since he or she can shoot, use his or her shikigami as a special weapon, or bomb the screen for heavy damage (and momentary invincibility). Nevertheless, it's refreshing to see a shoot-'em-up that does away with the generic science fiction premise common to most such games and instead goes for a fantasy anime theme inspired by Shinto and Buddhist mythology.

The multiple playable characters are a real treat, since they're really quite different. Each character has a different primary attack and a unique bomb move, plus two variations of shikigami for special attacks. By tapping the attack button, you'll rapid-fire your primary weapon, which usually blasts forward in a straight line for direct damage. To use the shikigami's special attacks, you press and hold the attack button instead. The shikigami attacks vary wildly from one character to the next. Kim De John, who carries a guitar case and apparently is a Korean schoolteacher, can summon giant glowing swords to spin around him. Kohtarou Kuga, the prototypical hotheaded young fighter, sends forth a spirit that automatically homes in on and destroys onscreen enemies. The shikigami attacks are powerful and have the added benefit of causing you to automatically collect the coins dropped by slain foes, quickly boosting your score and helping you rack up more bombs and hit points (you can take three hits before you die). However, you move considerably slower while using your shikigami, so there's some real skill involved in rapidly switching weapons.

The other neat twist to the gameplay is what's called the tension bonus system, which is comparable to how the Burnout racing games reward you for near-misses with oncoming traffic. What happens is your primary weapon gets seriously powered up when an enemy bullet grazes past you. The game thereby gives you a great incentive to just barely avoid taking damage. Granted, in the later stages, you'll be dodging so many bullets all the time that the near-misses will become more or less automatic. But when battling the tough bosses, you'll be able to take some risks to bring them down as quickly as possible.

Castle Shikigami 2 offers a wealth of different options for a shoot-'em-up. The main story mode is divided up into five fairly big levels, each with multiple stages and bosses. Even if you set the difficulty to very easy, you're not going to reach the end without a lot of practice, and even once you do, you've still got all those other characters to try out. There's also a boss battle mode that strips away all the regular enemies and other challenges in the levels, letting you take on each main opponent in the game in sequence, with just one life. And, for helping you get through those tougher parts, there's a practice mode that lets you try your hand at every part of every stage, as long as you've successfully fought past it in the main mode. There's even an extreme option for the main arcade mode, which fills the screen with even more dangers, as if the difficulty weren't significant enough to begin with.

Among other things, the game deserves credit for trying to weave a storyline into the proceedings, which is something most shoot-'em-ups simply ignore. However, once you see how clunky and flat-out bizarre the story sequences turned out, maybe you'll wish they weren't there. But they might just grow on you. The sequences are at least skippable, but you'll still see static anime-style portraits of the main characters overdubbed with really bad, poorly recorded English voice-over and nonsensical subtitles that sometimes don't match up to what the characters are saying. It's one weird non sequitur after another. Some of the point must have simply been lost in translation from the original Japanese, but whatever the case, the story sequences are so insanely bad that they're downright surreal. And that makes them insanely good in a mind-melting sort of way. It's actually really impressive that the developers bothered to create unique dialogue depending on who you choose as a playable character--especially because there's also unique dialogue for every two-player combination of characters as well.

Castle Shikigami 2 sports some clean, crisp visuals, though it's too bad it doesn't offer support for progressive scan displays. There are a number of visual options you can tinker with to best emulate an arcade-style experience, since this game was originally designed with vertically oriented screens in mind. If you're feeling bold, then you can tilt your TV on its side to play in the full-scale aspect ratio, but otherwise you're stuck looking at graphics that are 70 or 75 percent of their original size. The characters and bullets do appear kind of small, and sometimes the standard yellow bullets sprayed at you by your enemies can be difficult to detect against the background. Nevertheless, Castle Shikigami 2 is quite a good-looking game overall, despite its occasional fits of slowdown when the action gets really messy. You've got two solid soundtracks to choose from, and the rest of the sound effects are great, too. But yeah, it's hard to forgive some of that voice acting. During combat you'll hear your character and the bosses speak Japanese, and those lines sound just fine, if not great. That makes it all the more bizarre that the dialogue switches to English for the story sequences. Too bad there's no Japanese-language option in a game that's unmistakably Japanese otherwise. Besides, the story wouldn't make any less sense if you didn't understand a word anybody was saying.

Of course, the story really is pretty much irrelevant to Castle Shikigami 2, since this is a pure shoot-'em-up at its core. This game is just a great deal, especially for that $10 price, and it offers up a good variety of challenging levels, some unique and interesting play mechanics, and lots of challenge. So, if you've still got a place in your heart for no-nonsense action such as this, and you're up for some grueling levels that will really test your twitch reflexes, go find yourself a copy of Castle Shikigami 2. 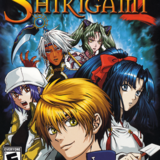 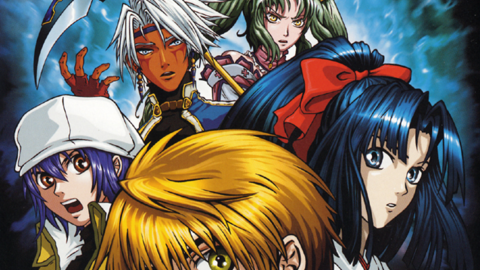 Good things come in cheap packages if Castle Shikigami 2 is any indication. This arcade-style shoot-'em-up features a unique premise, lots of tough levels, and good variety.