It has been just over two years now since Castle Crashers busted down the gates of Xbox Live and quickly earned legions of fans for its delightful visual style, irreverent humor, and gameplay elements that reinvigorated the side-scrolling beat-'em-up. Two years later, Castle Crashers hasn't lost its luster, and its considerable charms can finally work their magic on PlayStation owners. Castle Crashers casts you as one of four noble, conveniently color-coded knights who set out to rescue damsels in distress and rid the kingdom of barbarians, necromancers, aliens, and other scourges. Following in the footsteps of games like Golden Axe and Knights of the Round, Castle Crashers involves a lot of walking from left to right and hacking away at the legions of enemies who swarm onto the screen after every few steps you take. Combat is simple enough to be accessible and enjoyable for just about anybody--you can just mash the light and heavy attack buttons wildly and still get the satisfaction of cracking plenty of skulls. But those who like a little more depth to their action will find that it packs plenty of variety into its seemingly simple combat, and as you progress, earning experience points and leveling up your chosen knight, you unlock effective new combos, which helps stave off staleness.

Leveling up also lets you put points into improving any of your knight's four attributes: strength, defense, agility, and magic. In addition to being pretty handy with all the swords, clubs, slabs of meat, and other weapons you find on your adventures, each knight has elemental magic he can unleash on his enemies, and new magic attacks become available as you pour points into your magic attribute. The varied types of magic set the knights apart from each other a bit--the red knight can zap enemies with electricity, for instance, while the blue knight can freeze them in blocks of ice. There is plenty of variety when it comes to weapons as well; there are dozens of them. Your weapon of choice carries with it different attribute bonuses and penalties, and compulsive collectors will have a field day scouring the game's many levels to add them all to their collections. There are also many adorable animal orbs to find--these float alongside you, each one with a different helpful ability--and a huge number of additional playable characters to unlock. Castle Crashers makes it tough to put down the controller by constantly rewarding you with cool new stuff.

It also makes playing a joy with its inventive and occasionally surprising level design, memorable boss fights, and slew of funny visual gags, movie references, and other comedic moments. (Be warned, though, that some of the humor is pretty lowbrow: you've never seen so many gags involving pooping animals in one place before.) The varied level design may see you walking along and fighting enemies one moment, escaping a massive monster while riding a runaway deer the next, and drifting down a roaring river the next. Castle Crashers maintains this terrific sense of creativity throughout its surprisingly lengthy campaign.

Still, the length of Castle Crashers is a bit of a liability as well as an asset. Sure, more bright and amusing areas to tromp through means you get more game for your money. But at the same time, even with the glossy visual sheen and other improvements Castle Crashers brings to the gameplay of ye olde-tyme side-scrolling beat-'em-up, the act of walking to the right and cutting foes to pieces can stay entertaining for only so long, and Castle Crashers overstays its welcome a bit. This is compounded by the fact that you may reach points where you need to earn more levels and beef up your character before having a chance of completing that next area, requiring you to repeat earlier sections until you have what it takes. Things are considerably easier, and more enjoyable, if you set out on your noble quest with a companion or three, which you can do either locally or online. Two swords are better than one for cutting massive bosses down to size, and while single players are sent back to the world map the moment they collapse, in co-op you're given a brief period of time in which to revive a fallen companion before he or she gives up the ghost. But with four players hacking, slashing, and hurling magic about, the screen can become one big chaotic mess of movement, which makes keeping track of your character very difficult. Tackling the game with two players strikes a good balance--you get the benefits of another knight's sword, without the sheer bedlam that comes with a quartet.

Castle Crashers' striking visual style plays a key role in making the game so enjoyable. It's a design choice that makes the whole game better. The characters, environments, and backgrounds pop off the screen thanks to their gorgeous colors and a constant sense of movement and energy. The effect is like seeing the inspired fantasy-themed doodles of a 13-year-old come to life before your eyes. The music contributes to the mood as well, with a delightfully eclectic and really catchy mix of tunes that somehow always seem perfectly appropriate to the action, even when an electronica tune accompanies the sight of medieval knights battling a huge barbarian.

When you're not saving the land, you can enjoy some competitive combat lunacy in the game's Arena mode, where the simple but enjoyable combat system makes for some simple but enjoyable multiplayer mayhem. The PlayStation 3 version of Castle Crashers replaces the button-mashing minigame All You Can Quaff with a volleyball mode that supports up to eight players. Unfortunately, this mode is a disaster. The concept of whacking the ball back and forth with swords and casting spells on it to hinder the other team sounds promising, but the physics of how the ball responds when hit aren't satisfying at all and don't make for exciting rallies. But this doesn't diminish the strength of the main game in any way. Castle Crashers is certainly a delightful homage to the fantasy-themed multiplayer beat-'em-ups of days gone by. But more than that, it's a great game in its own right, with gameplay, humor, and a terrific visual style that combine to make this particular brand of old-fashioned fun really fun again. 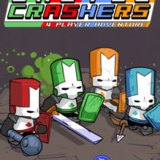