Lacrosse is a game of precision interrupted by bouts of impact--a fluid sport with jagged edges. Casey Powell Lacrosse 16, much to its detriment, conveys both poles in extremely unequal measures. Its harsh exterior obscures any redeeming factors hiding inside.

This marks the latest attempt to capture lacrosse in video game form, following the College Lacrosse mobile series. It's a widespread sport, and growing in popularity by the year, but compared to the titans of football, basketball, baseball, and soccer, it's obscure. Yet it seems ripe for digital adaptation: it's entertaining, physical, and fast-paced. Casey Powell Lacrosse, however, fails to establish a foothold.

It does show initial signs of promise: there's the ebb and flow of a methodical offensive possession, the rush of a momentous fast-break, the teamwork of a defensive stand. At times, it looks like lacrosse ought to: smooth, stylish, and sleek. When Casey Powell Lacrosse conveys what makes the sport exciting, it excels.

But those moments are few and far between. Throughout my midfielder's season with the Syracuse Citrus (there are no licenses for real teams in Casey Powell Lacrosse) I struggled with opaque controls, loose movement, jarring cinematics, and poor AI.

The latter is the most frustrating: I can't snipe top-shelf over the goalie's off-hand if my attackman teammate won't get out of my way. I can't rip a rebound shot if my middy chases the ground ball at little more than a jog. I can't split two defenders from behind the goal and feed my best shooter if he's sprinting in the opposite direction, seemingly alarmed at something happening in the bleachers across the field.

Even if he was in position, it wouldn't matter. Dodging--or any sort of movement at all--is tedious in itself. Casey Powell Lacrosse makes you switch to your weak hand manually. Using your off-hand is an important skill in lacrosse, especially for players in the attack (dedicated offense) position, who often have to beat skilled longpole defenders. But pressing a button just to switch hands is an added hindrance in a game already replete with them. Other sports games make this an automatic action as you sprint down the field, glide across the ice, or cross the soccer pitch. Not Casey Powell Lacrosse, though.

The movement here is poor in general. It feels more like you're floating above the turf than running over it, removing any feeling of contact with the ground. I often entered the opposing team's crease, thereby turning the ball over, because my player kept jogging long after I tried to turn him around. The same floatiness also applies to defense. When trying to body check an offensive threat, they can slide right by me in an awkward animation as my defender extends his gloves into an empty void.

Then there's the rate at which you cross the field: incredibly slow. The sprint action makes no difference, letting opposing attackmen magnetize to me as I try to move the ball from my side of the field. Clearing should be a challenge, but here, it can be a desperate battle.

I expect to battle a staunch defense. I don't want to battle dense controls.

If your steady crawl does get you across midfield, you can play offense--but there are design obstacles here as well. Chief among them are the the overly complex stick controls. Quick shots are easy, requiring only a flick of the analog to perform. But quick-release shots are only helpful on the goalie's doorstep, or pinging the crossbar after a cut across the center. Any situation calling for a hard outside rip is a nuisance--some shots require a simultaneous pull of the left trigger, others a tap of the right shoulder button, others a half rotation of the analog stick.

Passing is a problem as well, leading to numerous turnovers and mishaps on both sides of the field. By holding the trigger, I bring up a floating dot above potential receivers' heads. This system would be simple and effective, but given the fact that the dot often jumps to another player just as I release the trigger, it's not. Casey Powell Lacrosse can feel great when the passing, shooting, and movement all play their part. But they rarely do. I expect to battle a staunch defense. I don't want to battle dense controls.

The game's presentation doesn't do its poor mechanics any favors. Character models resemble neanderthals more than modern human beings, with hair gravitating somewhere between uncooked spaghetti and rotten pineapple husks. Their heads are often disproportionate to their bodies, too, making them look less human, removing me from the experience as I navigate the team management menus.

The cinematics refuse to pull their weight as well. At one point, I scored a goal just as the clock hit zero and the game ended. My players leapt around the field, arms raised high as they performed their own personal celebrations and victory laps, high on the rush of a last-second goal.

That denial embodies the experience of playing Casey Powell Lacrosse 16: trying to enjoy yourself despite the ordeal you just suffered. There's no finesse here, no style, and all too few moments where it actually resembles the source material it's trying to represent. The sport of lacrosse may be growing in popularity by the year, but it still lacks a proper video game representative. 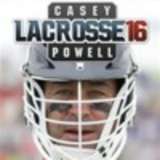 Mike Mahardy played real lacrosse for eight years, and Casey Powell Lacrosse 16 for 12 hours. A copy of the game was provided by Big Ant Studios.