The younger crowd may find Cartoon Network Racing to be an enjoyable racer featuring familiar and likable characters, but anyone else likely won't be as enamored.

Taking characters from a popular game or cartoon series, sticking them in some karts, and releasing a racing game just in time for the holidays is such a frequent occurrence that it's almost becoming a tradition. Keeping the spirit alive this year is Cartoon Network Racing for the Nintendo DS. The game does nothing that other kart racers haven't already done, but there's plenty of neat stuff to unlock, and the game does a decent enough job of mimicking the popular Mario Kart series that children may enjoy it.

Despite the game being full of cartoon characters, there's no story here; you're just racing karts and trying to win. The game features nine playable characters from the outset, and you can unlock 11 more as you progress. Pretty much all of the Cartoon Network gang is here: The Powerpuff Girls, Dexter, Cow, Chicken, Johnny Bravo, I.M. Weasel, I.R. Baboon, Courage, and Muriel, to name a few. There are three basic gameplay modes: versus, time trial, and championship. Versus allows up to four players to race against each other via Wi-Fi. There are more racing options available if each person has his or her own cartridge, but even if only one person has a copy of the game, four people can race against a full field of racers. Time trial lets you head out onto the track alone in an effort to better your lap times. Championship is essentially the same as it is in every other kart racer--you compete in a series of races and accumulate points based on where you finished. The winner is the driver with the most points after all of the races have been completed, and they are awarded the trophy in a ceremony where each of the top three karts sits on the victory podium as colored confetti rains down from above... Sound familiar?

There are four different kart speeds available in the championship mode, though only the first one is initially available. After choosing the speed class, you're able to pick from four different championship series: Cowardly, Booger, Pork Butt, and Chemical X. Next you'll pick your racer. Each character has different attributes for top speed, acceleration, handling, and weight. The heavier karts seem to be the best because they're less prone to being brought to a dead stop in a collision, though all of the karts will come to a complete stop when they rear-end someone--it's very frustrating. Then it's off to the races, which take place on tracks that are ripped seemingly straight from the Mario Kart series. There's even a rainbow-colored track that takes place in outer space and has no walls. For the most part the courses are simple, and while they won't be challenging for adults, kids should find them entertaining, particularly when taking advantage of the game's many easy-to-find shortcuts.

The controls are pretty basic, too. You hit the A button to go, and you can use the right shoulder button to powerslide. There are numerous weapons that can be acquired by driving through floating boxes with question marks on them, and again, they're mostly generic: There's a blue missile that takes out the first-place driver, oil that will spin out anyone who drives on it, chili peppers to give you a boost, smoke screen to obscure drivers' screens, and so on. You can get an extra boost by driving over speed pads, and you can also gain an advantage by collecting stars that are placed throughout each course. When you collect enough stars you can hit the X button to activate an autopilot feature that sends you zooming past other racers at breakneck speed. It's a good thing to have handy, especially in the harder series, where the rubber-band artificial intelligence keeps things close right to the end. Unfortunately, the kart physics are poor, and you'll frequently come to a screeching halt when you hit another kart, graze a hazard, or bump a wall. The elastic AI, which allows less-skilled players to remain competitive, can be punishing for anyone with any racing experience. It's frustrating to be constantly peppered with missiles only because that's the only way the game keeps the races close. It's a little easier to forgive when you're racing your friends, but when it's just you and the CPU, getting blown up repeatedly doesn't make for a good time. Outside of these annoyances, Cartoon Network Racing is enjoyable, especially if you like unlocking things.

Collecting the gold coin on each track, winning races, and placing in the top three in championships earn you money, which can be spent in the Toon-Up Shop. Here you can buy new drivers, get new rides for the faster kart series, and unlock minigames and even cartoons. One of the minigames is a lame curling knockoff, but the other one, sketchbook, is pretty neat. You're shown a basic drawing of one of the Cartoon Network characters and then given a short amount of time to draw over it as best you can. When you achieve 75 percent accuracy, you earn points for whatever time is left on the clock, and then it's off to draw another character. It would have been nice to be able to finish and save the drawings, but for a minigame it's a lot of fun. There are three cartoons that can be unlocked as well, and though it will take a substantial time commitment to unlock them all, they're a nice bonus.

Even kids won't find much to enjoy when it comes to Cartoon Network Racing's visuals. The touch screen is used only as an overhead map, which other than for showing shortcuts isn't very useful. The karts are simple looking and don't feature a whole lot of detail. Neither do the tracks they'll be racing on. There's nothing wrong with the overall design, but there's hardly any detail to the courses, and what the developer is trying to pass off as "cartoon-style" visuals by using bright colors and then slapping black lines around poorly textured objects just doesn't cut it. If all of this skimping on the visuals paid off with a speedy frame rate that would be one thing, but of course it doesn't. At its best the frame rate is almost smooth, but even then it doesn't convey any sense of speed. At its worst the game is almost unplayable, and things move as if they're in slow motion. The sound effects aren't great, either. You'll hear a few catchphrases here and there, but most everything is drowned out by the horrible-sounding karts. Thankfully the music is catchy, so you can turn down the effects and crank the tunes.

In the end, Cartoon Network Racing is better than what is usually passed off as a licensed kart racer, but it's certainly no threat to Mario Kart. Younger children who are into any of the kid-friendly shows on Cartoon Network and are more concerned with seeing their favorite characters than they are about great racing will probably have a reasonably good time with the game. Anyone with more discerning racing tastes will probably play the game for a couple of hours, unlock most of the items, and then be done with the game forever. 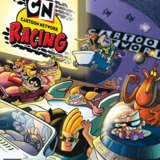