Unless fumbling your way through half-baked minigames to win some virtual stuffed animals sounds like fun, you should leave this overpriced collection on the shelf.

Step right up and get your money taken in Carnival Games, a scattershot minigame collection that offers 25 interpretations of real-life carnival competitions. In real life, most of these games are scams. Carnies hoot and holler at would-be suckers to get them to try to win a prize--all it'll cost is a couple of bucks. In the case of Carnival Games, the shady carnie is publisher Global Star Software, and for $40, you can play a variety of games that are typically either too easy or too broken, and rarely anywhere in-between. And your prize for playing? A bunch of virtual toys and a few more mediocre minigames to play. If that isn't a classic carnie scam, nothing is.

The game initially offers up 25 different minigames to play. These challenges run the gamut from skeeball, to target shooting, to knocking over milk containers with a baseball, to the classic test-of-strength game. All of these games use the Wii Remote in one fashion or another. Skeeball is mechanically just like the bowling game from Wii Sports, the ring-toss game has you flicking the Wii Remote as if you were actually tossing a ring, and anything that involves throwing a ball requires you to fling the remote forward in an overhand motion, sort of like passing the football in Madden.

The trouble with all of these games is that none of them are much fun beyond a couple of plays. Some, such as the milk toss and the shooting gallery, are so easy that you would have to have some seriously diminished motor skills to fail. Others, such as the football toss and the "nerves-o-steel" game (which has you moving a metal ring over an electrified wire, while trying to avoid getting shocked), just don't feel right at all. They're not impossible, but the controls feel too dodgy to allow for any level of consistent success. Others still, such as the lucky cups game, are utterly strategy-free in that they completely rely on fateful bounces in order to win. A few of the games are just amusing enough to be worth playing multiple times, but most simply aren't.

Your prizes for completing these games are goofy stuffed animals and trinkets that come in small, medium, or large varieties. Getting the better prizes eventually unlocks more variations on some of the existing minigames, but that's about it. You also earn tickets that can be used to play some goofy side-games, such as a love tester or a fortune teller, though the novelty of these runs out almost immediately.

Everything about Carnival Games simply feels lackluster, from the gameplay to the presentation--though especially the presentation. Maybe it's an homage to the ramshackle nature of the carnival itself, or maybe the game just had a teensy budget, but whatever the case, the game looks pretty lousy. At the outset, you can create an avatar to represent yourself. You get the impression that the game was at one time going to use Miis, or was at least heavily inspired by them, because you build the same sort of limbless people. The problem here is that customization is extremely limited, and everyone you make looks either stoned out of their minds or like some kind of mild psychopath. You can give them hard hats, funny shoes, and other bric-a-brac to try to wacky them up, but it doesn't really do the trick. All the in-game graphics are grainy and bland, with artwork and textures that barely compete with some of the GameCube's ugliest games. There isn't much audio in the game at all, save for a few jaunty carnival tunes and a bit of narration from a helpful carnie. What's there is functional, if not impressive.

The Nintendo Wii is chock-full of minigame collections, almost all of them of higher quality than Carnival Games. Sure, it's got variety, and four-player multiplayer, but so does literally every other minigame collection on the system. So why would you pay $40 for a game that would be a stretch to call worthwhile even at a budget price tag? You wouldn't. It's half the fun at twice the price. That's a lousy deal any way you slice it. 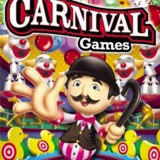 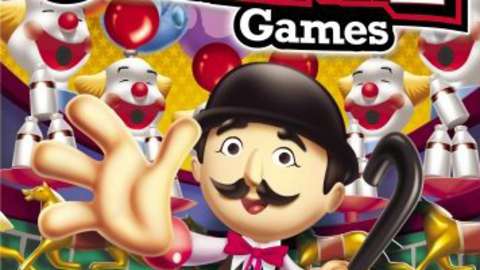 Try to win a goldfish or a giant stuffed bear by throwing balls into too-small baskets and rings onto too-big bottles in this collection of classic carnival games.