Cargo: The Quest for Gravity Review

Cargo: The Quest for Gravity pulls you in with its surreal visuals and strange premise, but its gameplay rarely gets off the ground.

If you've ever been stranded on an archipelago populated by naked little man-babies and overseen by a three-faced mechanical god, then you probably have a pretty good idea of what to expect from Cargo: The Quest for Gravity. For everyone else, it represents one of the weirdest and most baffling experiences you can have, in a video game or otherwise. The sheer strangeness of its surreal world makes Cargo initially intriguing, but the spark of strange whimsy that inhabits the visuals and the concept of this unusual adventure fails to imbue the gameplay with joy. Once the novelty of its premise wears off, there isn't enough excitement to keep this adventure afloat.

It's impossible to describe Cargo's concept without sounding like a crazy person. You play as Flawkes, a mechanic aboard the Hippo, a blimp delivering a cargo of machine parts to some remote islands. As the Hippo nears the archipelago, some of the small naked inhabitants of the islands get so excited by the blimp's arrival that they rocket up into the air and burst into explosions of pure fun. These explosions bring the Hippo down, though the pull of gravity is so weak that Flawkes plummets safely to the ground, nearly light as a feather. Flawkes soon comes to understand that the inhabitants--called buddies--exude fun when they're having a good time, and that this fun can be collected like currency and spent to restore gravity to the world. This brings famous landmarks like Big Ben and the Statue of Liberty down from the stratosphere and back to Earth. Mixed in with this are a lot of ramblings, courtesy of the resident god whose three mechanical faces ride around the archipelago's central island on a track, about the inherent flaws of humankind and a need to reboot the planet to support a more perfect life form.

You earn your first meager amounts of fun by running around after buddies and giving them a good kick in the backside to send them flying. (The little guys love that; they can't get enough of it.) And the sheer weirdness of starting a game by kicking buddies into the air and seeing them explode in flowery bursts draws you in, making you wonder what insanity might follow. Soon, you're prompted to spend the fun you've earned on a new sail for a sailboat that fell from the Hippo so that you can recover crates of cargo that are bobbing on the surface of the ocean. But this turns out to be a slow way to get around, and before you can recover all the crates, some of them fall to the ocean floor. At this point, you're told to upgrade to a motorboat. For the motorboat (as well as the cars, submarines, and flying machines you'll need later in the game), you can either instantly assemble vehicles to the specifications of any of the numerous blueprints you've found lying around the islands (provided you have all the necessary parts) or try building your own vehicles from scratch. You can also start with a vehicle based on a blueprint and then tinker with it. It's easy to build vehicles; the joints you purchase and collect can be linked together to build a framework, and motors, propellers, balloons, and other components can be snapped right on.

Unfortunately, there's little incentive to spend time constructing your own creations. Banjo-Kazooie: Nuts & Bolts handled its similar vehicle-building element much better by presenting you with challenges that could be completed more successfully if you got creative with your designs. In Cargo, there's never any need to build vehicles that are bigger, faster, or stronger; you can accomplish every goal adequately by using blueprints to construct the most basic version of whatever type of vehicle you need. (At the most, you might need to slap a life preserver or two onto a vehicle so that buddies will grab on and go for a ride.) If you enjoy tinkering, you might get a little joy out of designing your own vehicles, but this aspect of the game is poorly incorporated into the whole. And the vehicles, which can only be controlled with the keyboard, just aren't that fun to use. Cars feel detached from the ground, submarines are painfully slow, and helicopters are frustratingly floaty. Flawkes herself isn't much more enjoyable to control; she often gets caught on surfaces, making it a chore to do something as simple as jump to a slightly higher ledge.

Eventually, you spend some of your hard-earned fun to bring an iceberg crashing down to Earth, which freezes over the ocean's surface and brings about the onset of winter. You must then trade in your boat for a car and, naturally, spend time crashing into the huge penguins that rode the iceberg down from the sky and are menacing the buddies. At this point, the initially charming strangeness of the game's objectives starts to lose its luster, and the tasks you're presented with are more likely to have you scratching your head than smiling. You need to drive a few laps around a track, but it's not clear why. There are buddies speeding along the track with you, but it's not a race; it's just something you have to do.

Later, you need to use a submarine to bring 13 buddies to a chamber in an underwater volcano and then spend time tossing objects into the defective pipes there because the sounds these pipes are making aren't conducive to the buddies having a good time. And, of course, if the buddies don't have fun, the volcano won't start up again and the ocean will remain frozen. This task of picking things up and tossing them into pipes, like a basic rhythm game that comes later and some other odd jobs you have to do, is in keeping with the game's surreal bent, but it is too simple to be engaging. Additionally, ferrying buddies around becomes a frequent part of your work, and although it's initially funny to see chains of the goofy-looking creatures trailing from your vehicles, the novelty quickly gets old, and you start to feel like a taxi driver doing mundane jobs. Cargo finally wraps up with a sequence that breaks the game out of the dull and repetitive rut it falls into, but it's too little, too late.

Too often, your next task is not clear. There's always a line of text at the bottom of the screen that indicates what you should currently be working on, but these statements are often misleading or flat-out wrong. Early on, for instance, you're directed to make your way to a turbine and look for the captain of the Hippo, but he's not there, and going there doesn't result in a new objective being presented. Later, you're told to swim to volcanoes, but the ocean is frozen over, and you can't actually swim under the surface. Instead, you need to find the body of a submarine and then build a submersible to make your way to your destination. You often need to find things to advance the story, like a three-piece buddy band that clues you in about your next objective or cisterns of paint that are scattered around the archipelago at one point, and the aimlessness of these sections is frustrating. A map or a waypoint that indicated the location of your next objective would have kept things moving along.

There's no game that plays quite like Cargo, and there's no game that looks like it, either. The visuals are reminiscent of things you might see in one of Terry Gilliam's stranger films, and there's an off-kilter beauty to the sight of little houses, lighthouses, and the Chrysler Building floating in the air above the archipelago. Despite their surreal appeal, however, the visuals in Cargo leave a lot to be desired. If you switch to the cockpit view while driving a car, for instance, you see the steering wheel, but it doesn't turn as you turn. Buddies you bump into underwater have helmets on until the moment they grab onto your submarine, at which point their helmets disappear. And you're frequently presented with distracting messages that only serve to make the bizarre game even more confusing. Why do phrases like "Bear with it. It'll be over soon!" and "The end is nigh…" periodically appear in the center of the screen in huge letters? Like much of Cargo, it's probably best not to spend much time thinking about it. The sound suffers from similar distractions. Flawkes occasionally utters things like "Damn you all!" and "Never again!" for no apparent reason. These elements make it seem like Cargo is trying too hard to be weird just for the sake of being weird.

It takes about eight hours to play through the game's four seasons and see the credits roll. There's also a sandbox mode available, but the frustrating vehicle physics and lack of exciting environments make this game's world a poor playground. Cargo is 20 bucks, and its unique visual design and bizarre premise make it a game you won't soon forget, but despite its superficial strangeness, much of the gameplay here feels ordinary. The buddies who populate Cargo's archipelago have plenty of fun, but you have to do all of the work. 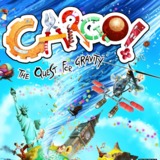 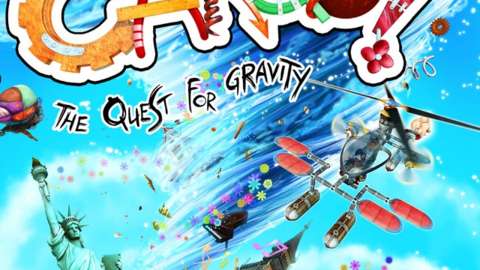 Cargo! The Quest for Gravity

Cargo has players put their creativity to work to build up wacky machines.

6.5
Sign In to rate Cargo! The Quest for Gravity