The bite-sized Captain Toad stages in Super Mario 3D World were a wonderful side dish, offering a very different type of challenge from the rest of the game. Little did we know at the time that the compact, puzzle-like levels would eventually find new life in a full-fledged game, Captain Toad: Treasure Tracker. Now, Captain Toad and Toadette, his partner in plunder, have hit the road on a quest of their own, and it's one of the most charming and enjoyable games to grace the Wii U. The two tiny explorers squawk and trot to all corners of the Mushroom Kingdom in search of golden treasure, and occasionally to rescue each other from danger. While it has a gleeful exterior, Captain Toad: Treasure Tracker's also a deceptively challenging romp, especially if you attempt to uncover all of the game's hidden items.

The Toads' outing is distinct from other adventures in the Mario universe for many reasons, but one in particular stands out: their abilities are pared down to the basics. They can't jump, and they don't take on any super-powered transformations. All they can do is walk, climb ladders, throw turnips, and use their headlamps to fend off ghosts. Such simplicity may sound boring, but it works because you're more reliant on elements in the world than your abilities to get from A to B. You ultimately seek items that are nestled in hard-to-reach corners of levels that are dense with paths and possibilities. Ladders, ramps, and moving platforms may yield an avenue to the stage's goal, a golden star, or they could be false leads. Deciphering all of the interconnecting parts of each stage requires a fair amount of abstract thought and mental coordination.

Understanding the lay of the land requires you to rotate the camera around the given stage, which, nine times out of ten, fits within the confines of the screen. Should you need a closer look at your surroundings, a quick button press makes the camera zoom in on Toad's location. Hidden nooks reveal themselves in unexpected places, but quite often, there's nary an entrance in sight. In order to access these tempting treasure holds, you sometimes have to interact with the GamePad's touchscreen to move sliding objects or spin wheels to raise platforms. It's one of the few games that's best played on the GamePad alone, where you can easily see all of the game's visual cues.

The Toads' adventure is fraught with more than just puzzles; goombas, ghosts, and butt-stomping birds are just some of the enemies that stand in your way, and they can be especially threatening when you're busy manipulating the stage around you via the GamePad. If you're quick enough, however, you can tap the screen and stun them in their tracks. As in most games set in the Mario universe, it takes two blows from an enemy to bring you down. One hit causes you to shrink, and the next will cost you a life and force you to restart the level, unless you manage to find one of the series' iconic red mushrooms. Yet, you never feel like your progress is in jeopardy. Even if you lose all of your lives, the game sets you up in a cave with a tiny field of plants that yield 1-UP mushrooms so that you can replenish your stock before continuing where you left off. It begs the question: why have a life system at all?

You don't spend much time wracking your brain to find a path to the goal in each stage, but you find yourself stumped when searching for hidden gems. At first, you assume these are optional, and possibly forego excavating them in order to progress forward, but you eventually need a certain amount of gems to open new stages. Some backtracking is needed, and while this may be a boring task in other games, the smooth pace at which the difficulty ramps up in Captain Toad provides the skills to tackle puzzles from the past that may have been too tricky during the first run. It's validating and rewarding when you deftly uncover secrets and realize that you've actually learned a thing or two over the course of the game.

Once in a while, you take a trip in a minecart, which is filled with turnips that you can toss at enemies and bricks. These moments are a nice respite from puzzle solving, as all you're expected to do is fire away at your surroundings and hang on for the ride, but there are still gems to find, so you need to keep your wits about you and keep an eye out as you whip around mountain peaks, being sure to target everything in sight in a timely manner. There are also bonus levels to enjoy after you complete certain levels that net you extra lives and coins. You occasionally unlock these stages by thoroughly completing full-fledged levels, and you have two options once you enter: wield a pickaxe and plow through fields of turnips for rewards, or pick up cherry multiplier items, which create clones of Toad or Toadette, and slide down ramps to collect extra lives.

Two bosses appear multiple times throughout the game, including a fire-breathing dragon in a rising lava pit, and an evil bird, Wingo, who just loves to kidnap Toads. Every time you face one or the other, the respective challenge evolves gracefully, requiring stricter timing and attention to your surroundings than before. However, save for the final battle, they aren't difficult.

In order to totally complete most levels, you need to find every gem and get to the star under extreme constraints. Sometimes that means stealthily slipping past enemies without alerting them; or you're challenged to find a golden mushroom in an unlikely place that's invisible save for a faint sparkle. For the true treasure tracker, there are plenty of challenges that ask you to look at old stages in new ways, and these are the most challenging moments in the game.

If you happen to have Super Mario 3D World saves on your Wii U, you're automatically treated to a selection of bonus levels taken right from that game, but even if you haven't played 3D World, fear not, because the same levels open up once you complete the main Treasure Tracker chapters. There's nothing wrong with extra gameplay, but these stages aren't as mentally stimulating as the main game. Toad and Toadette's journey is so interesting because the puzzles and stages are designed around their limited abilities, and almost every moment is spent solving a small part of a larger puzzle. While the bonus stages are adapted to suit the Toads' skillset with the introduction of ladders and moving platforms, they don't embody the puzzle-like structure that makes the rest of the game so great. You still get to enjoy an extended romp through the Mushroom Kingdom, but it's different and less appealing than the primary adventure.

Were Captain Toad's world not so appealing, it would be easy to grow tired of the repeat playthroughs if you need to go back and collect items like I did, but the cartoony, whimsical Mushroom Kingdom is easy to love, with layer upon layer of charm. From goombas in swim rings that flap their little feet underwater, to the tiny birds that land on Toad's head when he's idly wasting time, Treasure Tracker has a lighthearted and lovable presentation. It has the right mix of atmosphere and challenging puzzles to keep you engaged, and it's a great experiment within the larger Mario universe. It may have started out as a minigame, but with its original take on the Toad character and a large number of enjoyably tricky puzzles, it's great to see it in the spotlight it so truly deserves.

View Comments (233)
Back To Top
8
Great
About GameSpot Reviews 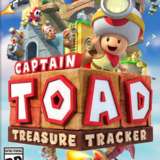 Peter played through the entire game, minus a few bonus levels, while enjoying his time in the Toads' shoes, and for the first time with a Wii U game, he preferred to play on the GamePad instead of the TV.