It's a surprisingly competent port. Unfortunately, it's a port of a game that most fans consider to be completely obsolete.

You may already be familiar with the Capcom vs. SNK 2D fighting game series, which was intended to be a dream-match fight between popular characters in Capcom's Street Fighter and SNK's King of Fighters games. Other than a few Marvel vs. Capcom games, it's the only "new" 2D fighting game series that Capcom has released in several years, and even then, the series heavily recycled old game characters and animations. So, you probably wouldn't expect too much from Capcom vs. SNK Pro: Millennium Fight 2000 for the PlayStation, a port of a game that originally appeared on the Dreamcast console two years ago. But it's a surprisingly competent port. Unfortunately, it's a port of a game that most fighting game fans consider to be completely obsolete.

That may sound like harsh criticism, but the fact is, most serious 2D fighting game fans have been playing Capcom vs. SNK 2--a game with an expanded character roster, new background stages, six standard "groove" modes of play, and a six-button attack setup--for the past year or so. While some fans aren't especially happy with Capcom vs. SNK 2, nearly all of them will agree that it's difficult to go back to the original Capcom vs. SNK after playing it. And since Capcom vs. SNK Pro is merely a slightly updated version (with two additional characters, a few new options, and some balance tweaks) of the original game, it's just as hard to go back to. Capcom vs. SNK Pro's two play modes ("Capcom groove" and "SNK groove"), its limited character selection, and its four-button attack setup will seem very limited to anyone who's played any version of Capcom vs. SNK 2.

That said, Capcom vs. SNK Pro reproduces most of the gameplay of the original Dreamcast and arcade versions. Unfortunately, that means it also reproduces some of the same problems. The PlayStation version does in fact play like the original game--the most effective way to defeat your opponents is to unleash devastating combinations of standard and special attacks in sequence. The game's timing has been successfully transferred to the PlayStation version, so if you're familiar with the series, you'll feel right at home with it. Capcom vs. SNK Pro lets you pick a team of characters using a total of four ratio points--medium-strength characters are worth two points, weaker ones are worth one, and the strongest characters in the game fill up an entire team at four points. Unfortunately, the game's character roster isn't very balanced, a fact that will be much more apparent if you've played Capcom vs. SNK 2 and are familiar with the different modes and ratio points you can spend to even out your teams in that game. And unfortunately, Capcom vs. SNK Pro for the PlayStation also reproduces the same stiff, sometimes unresponsive control of the original game. Pulling off some maneuvers on the PlayStation's Dual Shock controller is even more difficult than on the Dreamcast's four-way D pad.

The Capcom vs. SNK Pro series originated in the arcades, though it was brought to the Dreamcast console as a nearly perfect port, thanks to the Dreamcast's ability to handle both 3D graphics and 2D animation. The PlayStation is notoriously poor at handling 2D graphics, but Capcom vs. SNK Pro actually looks pretty good. For instance, the PlayStation version makes hardly any cuts in character animation, something the PlayStation was infamous for with other fighting game ports in the mid to late 1990s. Then again, the original Capcom vs. SNK generally had poor character animation to begin with, since many of the game's character sprites--especially those from the Street Fighter Alpha series--were already several years old. In other words, the characters in the PlayStation game don't look much worse than they did in the Dreamcast version, but they didn't look all that good to begin with.

Unfortunately, the same can't be said of the game's background stages or special effects. Capcom vs. SNK for the Dreamcast had several different background stages, and while none of these stages were particularly interesting--most of them were set in nondescript city or outdoor areas--they were detailed, animated 3D backgrounds. The PlayStation game's backgrounds have far fewer frames of animation, and though the port has every last one of the original game's background stages, they all tend to look fuzzier and less detailed. Some stages also suffer from some animation slowdown in some of the busier levels, like the "exploded tanker truck" level. Most of the original Capcom vs. SNK's special effects made use of colored lighting, and some of them, like certain projectile attacks, look decent in the PlayStation version, but other effects, especially the flames from fire-based attacks, look ugly and pixelated. This is especially apparent in the game's intro sequence, which suffers from both animation cuts and unattractive special effects.

The game's sound is actually pretty good. The PlayStation port has all the different character voice samples from the original game, and even though they tend to sound a bit tinny, they don't suffer from the odd sound bug in the Dreamcast version that sometimes caused voice samples to be muffled. The PlayStation game also has all the music from the original game, most of which is rather generic techno that isn't all that interesting, especially if you've all ready heard it in previous versions of the game. Unfortunately, as you'd expect from a PlayStation game, the game pauses to load between every match, so you won't hear any continuous music tracks. Capcom vs. SNK Pro for the PlayStation has between-round load times of around five seconds, and it tends to load a bit longer between fights. Thankfully, the game has a handy option that lets you press start at the end of a fight to immediately begin the next fight with your team in the same order.

Capcom vs. SNK Pro for the PlayStation obviously doesn't have the record-a-playback option or network options of the original Dreamcast game, so it attempts to compensate in terms of replay value with a new "price mode." Price mode is basically the character-buy system from the very first Capcom vs. SNK game--beat the arcade mode, and you'll earn points to unlock alternate versions of characters, as well as the game's two not-so-secret characters, Morrigan and Nakoruru. Otherwise, the game has regular arcade mode, a practice mode, and pair attack mode, which lets you play through a set of computer rounds as any two characters, including two of the same character. Unfortunately, choosing the same character doesn't shorten the load times at all--a full-on survival mode or continuous same-character match mode with shorter load times would definitely have been an improvement.

Capcom vs. SNK Pro for the PlayStation is about as good a port as it could be, all things considered. However, there are a lot of things to consider: The game is on the aged PlayStation hardware, it has some pretty substantial load times, it doesn't play very well with the standard Dual Shock controller, and, thanks to its lower graphical resolution, it tends to have less-detailed backgrounds and ugly special effects. It's also a port of a game that came out two years ago and has since been totally eclipsed by its sequel, Capcom vs. SNK 2. But all this seems academic, because if you're at all serious about 2D fighting games, you probably left Capcom vs. SNK Pro behind some years ago and have some home version of the much-better sequel already. 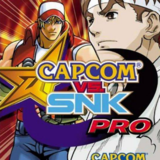 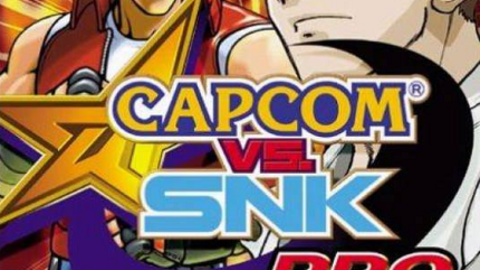 IMPORT - Though its gameplay isn't especially deep, Millennium Fight Pro is an enjoyable slugfest that'll let you play with teams of some of the most popular 2D fighting-game characters ever created.