This fighting game compilation is a great window to the past--even though the view is full of monsters.

Capcom Fighting Collection feels like a family reunion. Ten games reside in this digital banquet, ranging from all-time fighting game favorites to a few relics of the past. They all play exceptionally well, particularly online, and each one is an arcade-perfect port. The main issue with the collection is balance, as half of the offerings are centered around a single series: Darkstalkers. While those games are good--the previously Japan-only titles are particularly appreciated--a little more variety in this collection would have pushed it up a tier or two. As it stands, it's a little too much of a monster mash.

This isn't to say there aren't a few well-known, non-Darkstalkers games in the collection as well, as it showcases the breadth of Capcom's arcade 2D fighting game history. Both Hyper Street Fighter II--the 2003 port of 1994's Super Street Fighter II Turbo--and 1996's Super Puzzle Fighter II Turbo are included in Capcom Fighting Collection. While each title has been ported multiple times since its original release--SFII is available pretty much everywhere, and although not as ubiquitous, Puzzle Fighter II Turbo has also appeared on more console generations than you'd think--this collection marks the first time the games have been sold together. Both play exactly as you remember them here: Hyper SFII is the classic one-on-one fighting game starring Ryu, Chun-Li, and more, while Super Puzzle Fighter II Turbo replaces fighting with gem-matching in a format similar to Columns from Sega.

Every game in Capcom Fighting Collection comes with added perks that make them more approachable to modern or casual players, but otherwise don't alter the experience much. The ability to save your progress as you play through each game's arcade mode is neat, but all of these ports are set to "free play," meaning I can continue as much as I want without quarters and without repercussions. Unless I'm trying for a one-credit run, the save feature is effectively meaningless.

The more impactful addition is assigning special moves to the left shoulder button and super moves to the left trigger, with different moves performed by pressing a direction and the corresponding button a la Super Smash Bros. This allows you to simplify the controls and get around tough button combos without breaking the game, giving someone who's less familiar with arcade fighting games an increased chance of success. While longtime players likely won't use this feature, it allows newer players to use the flashiest moves in their fighter's arsenal while still learning the trademark Capcom special move motions.

The best parts of this collection are curios like Cyberbots, which was released in 1995, and Red Earth, which released the following year. They both contain the DNA of what made Capcom fighters great in the arcade days, while also standing out in their own unique ways. Cyberbots' control system emphasizes mobility more than the other games thanks to the Boost button, which adds moves like dashes, multiple jumps, and more to each character. The game also lets you choose between six pilots--which affects the story you'll play through--while also giving you a separate choice between 12 robot "fighters." This allows you to find the robot that best fits your style, but also experience each individual story by choosing different pilots. It's a novel way to add variety to the arcade mode through the story being told, making the full story of Cyberbots more accessible.

Red Earth, meanwhile, feels unlike anything Capcom has ever done before or since. It injects RPG elements into a fighting game, with characters who level up and a password system--whenever you reached the game over screen, the game would generate a password that allowed you to pick up where you left off. While you can choose between four characters, the enemies you'll face as each one are completely different, making the core adventure more of a boss rush than a traditional arcade mode. Power-ups found during matches affect the properties of your moves and leveling up adds moves to your fighter's arsenal, while buffing their stats. This is the game that stands out in this collection: the one I would expect those who weren't in arcades in 1996 will flock to, if only to experience it for the first time. Considering this is the first console appearance for Red Earth, for fighting game aficionados, it's almost worth the asking price alone.

The rest of the collection is occupied by a single series: Darkstalkers (also known as Night Warriors or Vampire Savior, depending on who you ask). The entirety of the franchise is here, including the two alternate versions of the third game, Vampire Savior, which only appeared in Japan. These games have developed a cult following in the years since their release, and rightfully so: They're unique, they're fun, and they introduced a lot of mechanics that Capcom fighting games still employ to this day. While Darkstalkers as a franchise is certainly a worthy inclusion, having all five games in this collection feels unnecessary.

I understand the gimmick of "first time released outside of Japan" as a selling point, but these two ports don't add anything to the Vampire Savior we Westerners saw in 1997. If anything, they take things away--Vampire Savior 2, for example, removes the wolfman Talbain, the yeti Sasquatch, and the merman Rikuo, and replaces them with the hunter Donovan, the robot Huitzil, and the alien Pyron. No gameplay mechanics are changed--it's just replacing three characters for three completely different characters. Preservation of video games is a huge issue, so having these ports is a good thing in general, but when a collection is limited to 10 games, and three of them are essentially the same, that hurts the overall package. The Darkstalkers games are fantastic 2D fighters worthy of their cult following, and they absolutely belong in a compilation like this. However, there are lesser known games from Capcom's 2D fighting catalog that could have benefitted from inclusion.

Capcom Fighting Collection does a good job of revisiting the past, but it doesn't quite go far enough. Hyper Street Fighter II is a stalwart, Super Puzzle Fighter II Turbo and Super Gem Fighter Mini Mix are goofy and fun, and Cyberbots and Red Earth are unique and good examples of what a collection should include. The overabundance of Darkstalkers games--as good as they are--does not help the overall package, as there are still some forgotten Capcom fighting games that could have used the exposure instead. Reliving these games is a lot of fun but, like most reunions, there's that one member of the family that's demanding a bit too much attention. 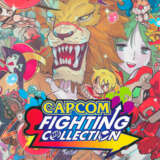 Jason Fanelli spent eight hours walking down Capcom's memory lane, playing each of the 10 games both offline and online. He's still not sure what's going on with that one Vampire Savior stage with the giant baby in the background.