Capcom's latest PSP compilation has some emulation issues, but there's enough of the good stuff on the disc to make it worth checking out.

Capcom has released quite a few compilations of its old arcade lineup over the years, but it's only recently that it's started to get good. The Capcom Classics Collection series has appeared on consoles, and now it's in its second edition on the PSP with Capcom Classics Collection Reloaded. While a few of the emulations aren't perfect, and the load times are a little on the long side, a good lineup of games and some interesting out-of-game options make this installment worthwhile.

There are 19 games in this collection, though some of the games are really similar, which makes it feel like a smaller collection. For example, you get Street Fighter II, Street Fighter II Champion Edition, and Street Fighter II Turbo: Hyper Fighting in this collection. It's nice to have all three games for the sake of having them, but you'll probably spend most of your time with Turbo, since it's the most evolved and balanced of the bunch. The disc also includes 1942, 1943, 1943: Midway Kaisen, Ghosts 'N Goblins, Ghouls 'N Ghosts, the Super Nintendo version of Super Ghouls 'N Ghosts, Commando, Mercs, Son Son, Vulgus, Higemaru, Exed Exes, Gun.Smoke, The King of Dragons, Knights of the Round, and Eco Fighters. That's a pretty good list, though some of the games are better (and more famous) than others. Nearly half of the games in the collection are shooters, and many of them, like Commando, Mercs, and Gun.Smoke, hold up pretty well.

For the most part, the emulation used to re-create these games is accurate. Though like in most other Capcom compilations, the versions of Street Fighter II aren't perfect. The sound seems to play back at a slightly higher pitch. But more importantly, there are a lot of load times in the games--the game will stop to load before every fight and occasionally go silent for a second or two when changing from the normal music to the faster, "someone is about to die" version of the stage music. In fact, most of the load times in this collection are noticeably lengthy. Some games also offer remixed soundtracks and effects, which are nice to have, but take away from the authenticity. For example, Dhalsim's stage in the Street Fighter games gets real elephant noises.

You can configure the controls as you see fit, and the controls work well for each game. But the PSP's D pad isn't up to all this diagonal movement. So it's a bit easier to use the analog stick for most of the games that require you to dodge a lot of bullets, such as Commando or 1942. Also, getting the dragon punches and fireballs out on the PSP's D pad can be a chore, so the analog stick might be a better choice there as well. It's not a perfect solution, but it's a functional one. You can also choose from a good number of display options. Standard horizontal games can be stretched to fill the screen or played in their original aspect ratio at two different screen sizes. You can play vertically oriented games as normal or rotate the display and hold your PSP sideways, with the D pad at the bottom and the buttons up top. It takes a little getting used to, but it does give you a better view of the action in most of these games, which makes it a great option. Multiplayer games have support for game sharing, letting you play multiplayer with only one copy of the game.

You can save any game in progress and resume it later. You also earn coins for every game you play. You earn coins for a variety of reasons, and they rack up whenever you stop playing a game. You'll get more coins for finishing a game, but the amount you get for just playing and getting a decent score is pretty hefty too. You take these coins into a slot machine minigame, which is where you unlock concept art, music, cheats for some of the games, and more. The slot machine is a regular old five-line slot machine, but you can stop the reels at will, making it more of an exercise in timing your button presses than one of pure luck. There are 895 different items to unlock in all, but some of the concept art is low-resolution, so you can't zoom in and read the text on sell sheets or anything. Either way, it's a cool addition.

While it's unfortunate that the emulation isn't perfect on the Street Fighter games, they're still playable. The support for game sharing also makes this a good package for anyone looking to play PSP games with a friend. Not every game in the collection is a winner, but there's enough here to make it worth picking up if you're a fan of the old stuff. 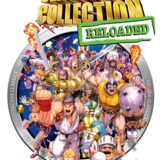 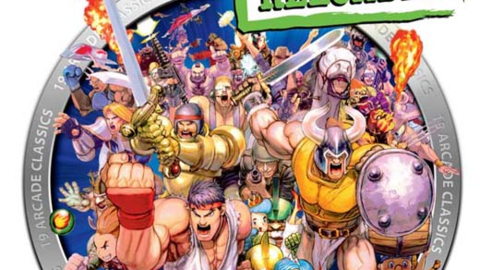 Capcom releases its second arcade compilation on the PSP with Reloaded, which has 19 titles including Eco Fighters, King of Dragons and Knights of the Round.