Call to Power II is definitely a superior game to Civilization: Call to Power, which should be enough to recommend it to those players who did enjoy the previous game.

The original Civilization: Call to Power was supposed to be a sort of sequel to Sid Meier's Civilization II - even though its game system was clearly based on Sid Meier's legendary design, it tried to extend and improve the basic concepts. Unfortunately, it wasn't particularly successful. Eighteen months later, Activision has taken another crack at reinterpreting the classic empire-building game. The result is stripped of the Civilization name (for licensing reasons, since Hasbro actually owns the name) and simply titled Call to Power II, and it's an improved - if still flawed - computer game.

In many ways, Call to Power II is what Activision probably meant the first Call to Power to be. Many people abandoned the first one due to its clumsy interface, which seemed to defy all logic and convention. Apparently, Activision took those users' complaints to heart, because the interface in Call to Power II is tremendously improved. The dialog boxes are better organized, buttons can be moved easily between the various summary screens, and everything is much more intuitively laid out. Therefore, unlike in the first game, those players with even a passing acquaintance with the Civilization concept will be able to jump into Call to Power II without much trouble. That's a significant improvement over the original Call to Power.

The graphics have also been given an overhaul, and while they are almost identical in style to those in Call to Power, they've been cleaned up - so now, they look very attractive. In addition, the animations and many of the sounds are extremely well done. Visually, Call to Power II is excellent.

One of the biggest changes to the Civilization system in the original Call to Power was the removal of some of the city-specific micromanagement, which was intrinsic to the whole Civilization concept. Instead of clicking through every city to adjust whether an individual worker was on a grassland or a plains tile, Call to Power introduced the concept of "public works." You'd designate a certain percentage of an empire's tax income to go to public works, and you'd use this pool of cash to construct tile improvements. These tile improvements can be made to any tile within a city's sphere of influence, and they don't require a specific worker to use them. Instead, a city reaps the benefits of tile improvements as a function of population size.

This somewhat more large-scale adjustment is a definite design aim of the Call to Power series. Most empire-building games focus heavily on micromanagement, and they have dozens of individual factors that need to be taken into account. Call to Power II streamlines this by eliminating other things, like individual city support for military units. The diplomacy system has been revamped as well, and at first glance, it's one of the most robust additions to the game. Multipart diplomatic overtures can be made, and proposals can have multiple parts and quid pro quo exchanges. You can choose a "tone" to set with your approaches, and everything you do in the diplomatic arena affects the other nations' regard for your own.

The only problem with the diplomacy aspect is that you receive far less feedback on your overtures than you put in. Complex proposals are met with simple responses like "Your proposal has been rejected," without any indication of why or what it means for future relations with that power. Diplomatic systems in games like Sid Meier's Alpha Centauri, while nominally less flexible, give you a better sense of interacting with other nations and thus feel more like actual diplomacy.

The victory conditions have also been adjusted. Instead of just the three all-conquering objectives of the original, Call to Power II allows for a peaceful victory, in which a nation achieves a permanent alliance with every other nation in the game. The alien-cloning victory of the original Call to Power has been replaced by a science victory, in which your goal is to build the Gaia Controller and all of its components. This is much like the Alpha Centauri victory of the very first Civilization game.

A major alteration to the Civilization-style combat system in Call to Power was the ability to combine up to 12 units into armies. The battle view that governed this combat was rather arbitrary, and it simply distinguished between hand-to-hand combat units and ranged attackers by segregating them into different ranks. Call to Power II introduces the concept of flanking units, which are not as strong as melee units by themselves - but they greatly enhance the power of melee units when the two are combined. The combat system is still hampered by the fact that you have no control over unit placement on the tactical screen, and that you are essentially reduced to being a spectator as the battle unfolds. Watching valuable units die because of seemingly random map placement can be frustrating.

When you sum up all these changes, Call to Power II is definitely a superior game to Civilization: Call to Power, which should be enough to recommend it to those players who did enjoy the previous game. Unfortunately, all the rest will find that the basic design is so similar that the two games can't help but share some shortcomings.

One problem stems from the fact that while the macrolevel of control eliminates some micromanagement, it doesn't give you the ability to truly manage the game at the empire level. The need to build new structures in each city is always there. For this reason, there is an option to have each city run by a computer-controlled "mayor," and this mayor can be set to build structures with an eye on different goals, such as offense, defense, science, gold, and the like. The mayors feature actually works quite well when you use it selectively for cities that aren't in the front line of combat. However, removing the unit support considerations makes it far easier to wage war, and with the 12-unit army system, Call to Power II (like its predecessor) replaces city micromanagement with army micromanagement.

Civilization: Call to Power was unique in that it introduced unconventional units such as the lawyer, the corporate branch, the televangelist, and other such weapons. Besides being a put-off for some players who didn't like the deviation from the military-historical theme, these units ended up unbalancing the endgame because they were so powerful. Having hordes of lawyers fight it out against corporate branches by filing injunctions in A.D. 2500 almost seemed like a caricature of an empire-building game.

These game-balance issues were exacerbated by the fact that the original Call to Power lasted until the game-year A.D. 3000. Call to Power II shortens the game to A.D. 2300, which reduces the length of time that these units are in play. Nevertheless, the final stages of a Call to Power II game are still susceptible to the old problems, since the units themselves still exist. As before, there is such a wide variety of threats inherent in the endgame that it's impossible to defend against every one of them. However, the computer opponent in Call to Power II is weak enough that you'll probably wipe the map with your armies before the enemy has a chance to deploy any of the more unusual weapons - except on the very highest levels. But on the highest level or against a human opponent, the same gameplay problems that hampered the original Call to Power will become evident.

Call to Power II has a lot of replay value. There are individual scenarios, a random map generator, and a stable multiplayer option. There is no provision for play-by-e-mail, but with the reduced micromanagement, online games should move more quickly than a game of Civilization II would.

In the end, playing Call to Power II seems like driving a car with a rebuilt engine: The first one failed, and while you'll get some more life out of the new one, it's still living on borrowed time. The original design flaws from Civilization: Call to Power haven't been removed from the sequel, and while the sequel is more attractive and functional than its predecessor, it's still effectively the same game. Call to Power II is an interesting take on a classic concept, but as with many reinterpretations of canonical standards, it isn't better than its source material. 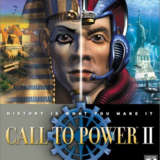