Call of Juarez: Gunslinger is a remarkable shooter, but not because of its story, or its visuals, or some innovative new game mechanic. No, what makes Gunslinger so successful is its focus on delivering some of the most entertaining shooting around. Each and every bullet fired from your trusty six-shooter rings out with a booming blast that echoes around the valleys of the Old West and slams into villainous cowboys with a thoroughly satisfying splat. It's all so tight, and all so controlled, that the shorter missions and lack of exploration are easily overlooked in the pursuit of the perfect combo and the glory of a leaderboard-topping high score.

With the shooting displaying such finesse, it's a shame that the story doesn't quite reach the same levels of quality. But that's not to say it's entirely without merit. There are moments when it's deliciously sharp and witty, its tongue firmly in cheek as narrator and protagonist Silas Greaves tells of his adventures through the Old West via a series of flashbacks, rewriting history in the progress. Famous outlaws like Butch Cassidy, the Sundance Kid, and Billy the Kid make appearances, and sometimes disappearances too, as Greaves forgets parts of his stories and throws outlaws in and out of each of the short levels at will. There are even a few nods to the dumbness of video game mechanics that raise a chuckle and let you know that Gunslinger isn't taking itself too seriously.

Outside of those cheeky moments, some crisp animated cutscenes, and the hearty Southern drawl of Greaves, the story offers little in the way of surprises, building as it does to a predictable conclusion. Still, the onus here is on the shooting, and Gunslinger is an undoubted success in that regard. Each level is constructed like an old-school pop-up shooting gallery, with crazed cowboys aplenty for you to take aim at. The use of cover and height around each level is impressive, not because it's particularly sophisticated, but because it gels so well with the fast-paced shooting. You're constantly kept on your toes and behind your iron sights as you scan behind every rock and up to every water tower to pick off pesky cowboys.

Do so quickly enough, and you begin to rack up a score multiplier. This proves to be very compelling, and tons of fun. The satisfaction of nailing a 10x multiplier with some wonderfully quick shooting as you dash behind cover cannot be overstated. And Gunslinger just gets better with each level as enemies move more quickly and rattle off more bullets, forcing you to up your game and become ever more proficient with your weapon of choice. By the end, you feel like you've developed some accomplished six-shooter skills, even if they are limited to the virtual world. And as an added incentive, in the story mode, any points you earn are converted to experience points, which you can use to buy new skills such as quicker reloads or the ability to slow down time when you look down a gun's iron sight.

There are special, super-shiny guns to unlock too, but the majority of weapon types can be found in each level. And while the weapon selection isn't vast, it is sensible, giving you enough variety to fine-tune the action to your own style. Like to pick off enemies from afar? Arm yourself with a rifle for long-range shots, and back it up with a quick-fire six-shooter for closer combat. Like things up close and personal? Saddle up with a sawed-off shotgun and a pair of powerful Ranger revolvers for some messy takedowns. Or, if you just feel the need to blow stuff up, light a few sticks of dynamite and watch your enemies fly.

The excellent shooting is capped off with the series' trademark quick-draw duels. The system has been tweaked slightly so that instead of following the footsteps of your opponent, you have to keep him within a target reticle to increase focus, while also keeping Greaves' trigger finger as near to his pistol as possible for a faster draw. It's a precise, fun system that's a great counterpoint to the fast-paced action that precedes each duel. If only every boss battle in the game worked this way. Sadly, there are some frustrating sequences where you're forced to face off against bosses armed with Gatling guns. Your only recourse is to spam dynamite at them from behind cover and hope for the best. Any other move results in a frustrating instant death.

Such frustrations aren't enough to sour Gunslinger, particularly when they disappear altogether in arcade mode. There, you're treated to short, timed levels where your goal is to rack up as high a score as possible as quickly as you can. These are an absolute blast to play through, distilling everything that's great about Gunslinger's combat into short bursts of action. And it's their very shortness that makes them so compelling, letting you quickly replay levels to rack up the biggest multipliers, and perfect every high-scoring headshot. There's a similar mode for duels too, where you're judged on the accuracy and speed of your shots. Both modes link to online leaderboards, so if you're the competitive type, prepare to sink hours into beating your friends, or making your way into the top 10.

It's Gunslinger's arcade hooks that set it apart from other shooters. The single-minded focus on creating as tight and as entertaining an arcade-style shooting experience as possible is a breath of fresh air, particularly after the disappointment that was Call of Juarez: The Cartel. There's so much stupid satisfaction to be had from Gunslinger's bloody headshots and from nailing sweet combos that its flaws quickly disappear in a flurry of gunpowder and shotgun shells. It doesn't look half-bad either, with a semi-cel-shaded design and some nicely detailed environments that drive the Wild West theme home. Don't worry that the series has been moved to XBLA. Call of Juarez: Gunslinger is a whole heap of Western fun and a thoroughly welcome return to form. 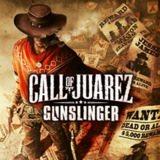