Top production values and exciting gameplay make Call of Juarez: Bound in Blood one call you should definitely heed.

Prequels are by definition concerned with looking at what has come beforehand, but Bound in Blood is anything but a backwards step. This game--a prequel to 2007's Call of Juarez--is a tense, riveting, and superb-looking first-person shooter that ditches the stealth elements that clogged up the original like molasses. Instead, it focuses on action-packed shoot-outs and set-piece moments that will make you feel like you've strapped on the six-shooters and stepped straight into the dusty, violent Wild West. And while it's over all too quickly (and filled with none-too-smart enemies), Call of Juarez: Bound in Blood is sure to scratch the itchiest of trigger fingers.

The game's Western theme is presented with aplomb: it showcases an impressive world that bleeds with Wild West iconography. Bound in Blood is more spaghetti than Unforgiven--gun duels are preceded by intense bouts of staring, enemies will topple dramatically off high balconies when shot, and there is more than one large gunfight inside an abandoned church or saloon. The game's story touches on many well-known Western motifs, such as honor, betrayal, greed, faith, and even love, and while it doesn't tread any new ground, it does present a compelling narrative.

Set years before the first game, Bound in Blood follows the McCall brothers--Ray and Thomas--as they change from honorable Confederate deserters to amoral treasure hunters seeking a fabled fortune. If you played the first game, you know Ray as a religious fire-and-brimstone preacher, which is a stark contrast to the lustful, greedy, coldhearted Ray portrayed in Bound in Blood. It's one of the great pleasures of the game to see just how this transformation takes place, and while you'll probably see the ending from a mile away, it still packs a hefty emotional punch.

While Ray is a brutish type, his brother, Thomas, is more thoughtful (although just as violent), and you'll get to play as both in Bound in Blood. You could also play as two different characters in the first game, but while the two there were clearly delineated as action or stealth, this time around both characters are action-focused. Ray is more direct: he can duel-wield pistols, throw explosives, break down doors, and walk around with the occasional Gatling gun. Thomas is an expert with the rifle, is deadly with a bow, can use a lasso to reach high places, and can use knives for silent stealth kills. Ray is all about in-your-face confrontation, rushing in with both guns blazing and blowing up any obstacle. Thomas lets you play a more measured game, using the rifle's long sights to take enemies out from a distance. Each brother also gets his own special attack--called concentration mode--which slows down time to allow quick attacks on multiple targets. Though their attacks are performed differently--Ray's requires you to quickly move your targeting reticle over foes, while Thomas' has you flicking the right stick on the controller (or moving your mouse back and forth in the PC version) in order to replicate a gun's hammer--the effect is the same: mass carnage.

Apart from a few missions at the start and near the end of the game, you can choose to play as either Ray or Thomas throughout most of Bound in Blood. The two brothers stick close together for most of it, meaning that apart from a few instances where one brother has to take a different path, you'll see and do the same thing no matter which one you play as. How you play--aggressive as Ray or circumspect as Thomas--is different enough, however, to make it worthwhile to go through the game twice. This is a plus because of the brevity of Bound in Blood's single-player campaign. You'll likely finish it (including all side missions) in about seven hours on the first run.

However, those seven hours will be eventful, with gameplay flowing nicely between intense shoot-outs, large-scale set pieces, and intimate one-on-one gun duels. The available weapons for the many Bound in Blood shoot-outs are fairly limited compared to other shooters, although given the time period, that's hardly surprising. Both Ray and Thomas can use pistols, shotguns, and rifles, and there are several varieties of each that you can upgrade to as the game progresses. The large set pieces happen with good regularity and include using a cannon, blowing up a Union paddle steamer (don't worry, the Confederates get their due eventually), riding a raft through rapids while being pursued by angry Native Americans, using a cart-mounted Gatling gun to mow down enemies on horseback, and even fighting your way out of an ancient underground temple as it gets buried in sand. You'll also get plenty of time on horseback, although the horses can change direction on a dime and even quickly strafe, so they don't feel much like real animals when you're astride them

The gun duels are less hectic but just as tense. These one-on-one affairs act as boss fights, pitting you against an especially powerful enemy in an old-fashioned quick-draw fight to the death. The camera shifts down to a cinematic view low behind the player for these duels. You'll have to match your opponent's left and right steps to keep him in the centre of the screen, while keeping your hand close to your pistol. Duel controls are quite precise, and you'll never feel like they're preventing you from winning a quick draw. It's heart-in-the-mouth stuff most of the time, and you'll probably die plenty of times before you get the timing of a draw right.

Controls are similarly tight across the rest of the game, although Bound in Blood's auto-cover system does take some getting used to. Simply pushing up against a wall, rock, tree, or crate puts you into cover mode, and for the console versions of the game, pushing the right stick left, right, up, or down leans your character out. On the PC you use the mouse, which feels far more natural than the clunkier Xbox 360 and PS3 controls.

You probably won't even need to use cover a great deal when playing on the game's default medium difficulty, since it's easy to breeze through. Shooter veterans will want to play on hard difficulty straight off, which makes the enemies more accurate and able to deal more damage (and there's the unlockable very hard difficulty to try after that). Even on hard, the game can be quite forgiving, thanks to Bound in Blood's generous checkpoint system and some unsophisticated enemy AI, which sees many of your foes simply standing in the open and not using any flanking or support strategies. Because of this, it never feels like you're fighting a smart, organized force: most of the challenge in the later half of the game comes in trying to spot where well-hidden enemies are shooting from. Fortunately, your brother's AI is significantly better--Ray or Thomas (depending on whom you're controlling at the time) are great companions, able to hold their own against most foes and generally lending strong support throughout the entire campaign.

It's a wonder, then, that a co-op story mode has been omitted from Bound in Blood, since there are two characters going through practically the whole campaign together. The multiplayer is all competitive and can accommodate up to 12 players (both online or hosted locally) in five different modes across eight maps. There's some depth thanks to the many character classes available, each with its own particular strengths, weaknesses, and gear. The miner, for example, starts with a shotgun and explosives, while the native has only a bow but has greater speed. You can switch classes midway through matches, which adds a light layer of strategy to the game as you decide which class is the most advantageous at any given time (you can briefly switch to the sniper, for instance, to get rid of some pesky campers).

Most of these classes are initially locked, and you'll have to earn money through participating in ranked matches in order to buy them. The modes include standard Deathmatch and team-based VIP modes, and all of the games we played ran smoothly and lag-free. The most fun mode is Wild West Legends, which requires a team to complete a set of objectives across a map. Most of these involve blowing stuff up, and it's the opposing team's job to stop that from happening. There are eight scenarios mimicking famous real-life events (such as the gunfight at the O.K. Corral), and these matches can be enjoyable affairs where coordination with teammates is vital. Multiplayer, in fact, is quite strong across the board in Bound in Blood because of its varied modes, and provided that a strong community pops up, it should significantly extend the game's appeal outside of the solo campaign.

Strong gameplay isn't Bound in Blood's only appeal, though, because it also boasts some killer visuals. The Wild West looks stunning, and you'll see a variety of realistic environments, including dilapidated ghost towns, open deserts, lush forests, and dusty Mexican villages. There are some great visual effects at play, too; focusing down your gun's sights will blur the foreground in favor of what you're aiming at in an impressive depth-of-field showcase, while the lighting shifts as you move from blazing sunshine into a shadowy cliffside crevasse. And there are plenty of small details that help immerse you further into the world: a large spider crawling down the side of a tree, vultures casting their shadows as they circle high above, faded "wanted" posters hanging on the walls, and more. Bound in Blood is great to look at, and its visuals are complemented by some outstanding audio. The voice acting is close to pitch perfect, particularly the voices of the brothers McCall (some of the Mexican accents sound too exaggerated at times). You'll get to know the brothers well as they complain, banter, and curse their way through Bound in Blood, and all of it sounds like it could have been lifted directly from a Hollywood Western.

And that film comparison is apt, because this game's strong narrative and high production values make it an almost cinematic experience. Add to that its exciting gameplay, and Call of Juarez: Bound in Blood becomes the ideal sequel--one that is an improvement over the original in almost every way. Though the game is marred by its short length and weak enemy AI, those looking for a fun and different shooter experience shouldn't have any hesitation about biting the bullet and taking a ride with the McCalls. 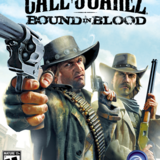