Call of Duty: Black Ops Declassified is a huge disappointment that does nothing right.

Since the PS Vita is in dire need of a good shooter to take advantage of its nifty two-sticks setup, you would think that a Call of Duty game to mark the arrival of Black Ops II on the system's big-console brothers would be just the ticket. You would think wrong. Call of Duty: Black Ops Declassified is a ticket to nothing but aggravation. This sad excuse for a portable first-person shooter shoots itself in the foot over and over again. Single-player is repetitive and annoying; multiplayer is a stripped-down waste of time. And various bugs, missing features, and other egregious flaws kick in their own contributions toward wasting a few hours of your life that you will never get back.

Declassified masquerades as a fully featured shooter, but in reality the game is anything but. Solo modes of play are lacking in every respect. The campaign option is highlighted by Operations, which consists of separate historic missions with series protagonists Alex Mason and Frank Woods going back all the way to commando operations during the Vietnam War. There is no story to follow. You just drop in on assignments in Vietnam, both Cold War-era Germanys, Nicaragua, and Afghanistan, usually in the midst of some bloody craziness, and kill a mass of enemies while swearing lustily about the injustice of it all.

None of these jobs are interesting. All you do is plod down narrow corridors and shoot your way through choke points held by armies of identical enemies. The other two single-player choices are Time Trial and Hostiles, both dreadfully dull exercises. In the former, you race around shooting targets on training grounds, while in the latter you simply try to survive against waves of bad guys.

Artificial intelligence is a mix of rank stupidity and supernatural skills. So you get bad guys anticipating your arrival by blasting away long before you even pop your head around the corner. And you get bad guys who stand there dumbfounded while you shoot them in the head, or who empty clips into the scenery with the accuracy of stormtroopers with pink eye. Foes are mostly identical in each level. There is some randomness with weapons, but otherwise you shoot the same baddies in one room after another until all of your cookie-cutter foes lay dead and you're whisked off to another foreign hellhole to do it all again. Animations match this robotic atmosphere; these clone enemies stutter-step like automatons and do little more than stand straight to return fire or freeze behind cover.

While you are faced with a lot of enemies that provide a reasonably hard fight even on the easier difficulty settings, most of the challenge comes from design flaws. Maps consist of drab linear hallways leading to rooms stockpiled with gangs of enemies awaiting your arrival. There is a fair bit of detail, some of it even attractive in a war-torn way. But there isn't any time to appreciate the surroundings when you're a rat stuck in a maze. Occasionally you do something a little offbeat, like blow up objectives or detonate a door, but that's about it.

Controls are a real annoyance. While veterans of console shooters will find that it isn't too difficult to aim at and kill enemies, movements are restricted. When backpedaling towards doorways behind you, instead of sliding against walls and scenery as you might expect, you get caught up on objects and move as if you are wading through quicksand. Not only does locomotion not feel right--it leaves you vulnerable to enemy fire. The game also makes use of the Vita's touch screen in an incredibly ham-fisted manner, requiring you to hit it whenever you launch a grenade or engage in a melee attack.

Saving is not allowed in the campaign missions, either. Granted, they are pretty short. But they also include timed goals and a fair number of tough spots that you won't blast your way through immediately. So you get killed often and sent back to the very start of missions. Some sort of save-on-demand or checkpoint feature is sorely needed, because the repetition gets maddening quickly. Saving was probably kept out of the game to lengthen it. Any experienced shooter player could likely trudge through the entire list of campaign scenarios in under an hour without the need to replay huge sections of missions and endure the same unskippable opening cutscenes again and again.

Multiplayer could and should be the saving grace. It is at the heart of the entire Call of Duty experience, and the option here does provide a lot of the depth seen in the console games when it comes to classes, earning experience, and acquiring new gear. But it still doesn't work, due to some questionable design decisions. The biggest issue is the scale of battle. Maps in all of the modes of play (a healthy selection of games includes Team Deathmatch, Free for All, Kill Confirmed, and Drop Zone) are absurdly cramped, even for the maximum number of eight players that can take part in matches. Things are so crammed together that players spawn right in the middle of the action, making games little more than pure mayhem devoid of strategy. Luck is a major factor in winning or losing a multiplayer match.

Bugs are another problem. Crashes occur on a fairly regular basis, locking the system up. It's tough to stay connected to games, and even remaining hooked up to Wi-Fi can be a challenge. Call of Duty: Black Ops Declassified is a massive disappointment that tarnishes this highly regarded franchise. What's more, this is a blown opportunity for the Vita to garner itself a headline game and franchise that could have really energized the system. Instead, we get a quick, forgettable knockoff cranked out simply to take advantage of the buzz around the Black Ops name. 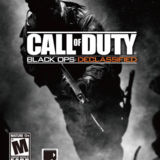