The single-player campaign is over in a flash, but the high quality of that campaign and its terrific multiplayer options make Call of Duty 4 a fantastic package.

It took awhile, but Infinity Ward finally got the message that World War II is played out. With modern times and international affairs becoming more and more, shall we say, interesting in recent years, the 1940s just don't carry as much weight as they used to. Perhaps that's why Call of Duty 4 has a new subtitle, Modern Warfare. By bringing things into a fictionalized story that still seems fairly plausible, the developer has made a much heavier game. But COD 4 is more than just an updated setting. It's also an amazing multiplayer first-person shooter and a great but brief single-player campaign with the visual chops to make it a standout shooter in an era filled with seemingly dozens of standout shooters.

The only real catch is that the single-player is almost shockingly short. If you've been keeping up with this style of game, you'll probably shoot your way to the credits in under five hours. While you can raise the difficulty to give yourself more of a challenge, the main thing this does is make the enemies frustratingly deadly, which sort of detracts from the fun.

While it may have a lack of single-player quantity, it makes up for most of it with its quality. The game tells its story from multiple perspectives, and you'll play as a new British SAS operative as well as a US Marine. The campaign takes you from a rainy night out at sea on a boat that's in the process of sinking to a missile silo where it's on you to save millions from an unsavory nuclear-powered death. Along the way, there are plenty of jaw-dropping moments where you'll look around the room for someone to whom you can say, "I can't believe that just happened." In a world filled with war games in which the good guys come out unscathed and the world is left at total peace, Call of Duty 4 will wake you up like a face full of ice water.

The action in the campaign is usually very straightforward. You have a compass at the bottom of your screen, and the direction of your current objective is very plainly marked. But getting from point A to point B is never as simple as running in a straight line, as you'll be conducting full-scale assaults in Middle Eastern countries by moving from house to house, taking out what seems like a never-ending stream of enemy troops along the way. You'll also get an opportunity to raid Russian farmhouses in search of terrorist leaders, disguise yourself as the enemy, and, in one sequence, don a brushlike ghillie suit and crawl through the brush as enemy troops and tanks roll right past you. It's a breathtaking moment in a campaign filled with breathtaking moments. Unfortunately, it's about half as long as the average shooter, and there are plenty of sequences where you wish there were just one or two more hills to take.

Of course, if you're looking for longevity, that's where the multiplayer comes in. Up to 18 players can get online and get into a match on one of 16 different maps. Many of the levels are taken from portions of the single-player and they offer a healthy mix of wide-open, sniper-friendly areas and tight, almost cramped spaces where grenades and shotguns are the order of the day. There are six game modes to choose from. The old standby is team deathmatch, though you can also play in a free-for-all deathmatch, which isn't as much fun as the team modes. The other modes are more objective-oriented, and a couple of those have you lugging bombs across the map to blow up enemy equipment, or preventing the enemy from blowing up your base. Others have you capturing control points. Lastly, you can change up the game rules a bit with a hardcore setting that makes weapons more realistically damaging or an old-school mode that puts weapons on the ground as pickups and generally moves away from the simulation side of things.

In addition to just firing your weapon or tossing grenades, you earn some more interesting tactical moves for skilled play. If you can shoot three opponents without dying, you're able to call in a UAV drone, which basically is an upgraded radar that makes enemy positions show up on your onscreen map for 30 seconds at any time. Normally, enemies blip up onto the map only if they fire their weapon to make their location known. If you can go on a five-kill streak, you can call in an air strike, which brings up a shot of the entire level map and lets you place the air strike wherever you like. When combined with a UAV sweep, this can be really devastating. If you can make it all the way to seven kills--which is actually easier than it sounds--you can call in a helicopter for support. It'll buzz around the map and automatically open fire on enemies, though enemies can shoot it down, too. These additions to the normal first-person shooter gameplay really open up the game a lot and make it superexciting to play.

You'll also always have something to work toward, regardless of mode, because in standard, public matches, you earn experience points for just about everything you do. Capturing control points, getting kills, calling in support, all of these things give you points that go toward your rank. Ranking up unlocks most of the game's multiplayer content.

The class system in Call of Duty 4 is also very interesting. Each class has a different weapon loadout and different traits, called perks. As you rank up, you eventually unlock all five of the preset classes and the ability to create your own class. This lets you pick your own main weapon, your sidearm, attachments for both weapons, what sort of special grenades you want to carry, and three perks. The perks are broken up into three groups to help keep things balanced, and as you continue to level, you'll unlock additional perks. These class traits are one of the game's neatest tricks and, again, really helps to set COD 4 apart from the pack.

Perks in the Perk 1 group are more focused on explosives, letting you get more flashbangs if you like, or letting you lug around a rocket launcher, which is great for taking out enemy choppers. The other two perk groups have traits like juggernaut, which increases your health. There's also last stand, which activates when you are killed by dropping you to the ground and switching you to a pistol, giving you a moment to kill the guy who took you out before he realizes you're still squirming around and finishes the job. Our current favorite is martyrdom, which causes you to drop a live grenade when killed. It adds a healthy dose of mayhem to the proceedings. The perks and other unlockables feel nicely balanced, too, so you probably won't run into situations where one class is just better than the other. As it should be, your ability to point the red dot at the head of your enemy and squeeze the trigger before he does the same is still the deciding factor.

While there are a ton of compelling gameplay reasons to play Call of Duty 4, it also has top-notch presentation. The graphics are fantastic throughout, and they do a great job of rendering wide-open fields, tight buildings or houses, smoke-belching silos, and lots more. Some of the multiplayer maps look like they've already seen a lot of action, with blast craters, destroyed tanks, and other things that you can hide in or behind. It also has terrific lighting, so everything looks as it should. Everything sounds right, too. When you hear a battle raging in the distance, it sounds appropriately muffled, and up close, the crack of an M16 or the full-auto barrage from an AK-47 are appropriately loud and angry sounding. There is also quite a bit of voice work throughout the game, and it's all nicely done. The music, for the most part, is the typical sort of action-movie music you've come to expect from a first-person shooter, except for a rap over the end credits that seems to simultaneously detail the game's story while also acting as a subliminal diss record with some slick talk about how this is the third chapter by Infinity Ward, perhaps lightly inferring that you should ignore Treyarch's contribution to the series, Call of Duty 3. It's great.

COD 4 is available on the PlayStation 3, Xbox 360, and PC, and each version holds up admirably. The differences between the two console versions feel mostly negligible. Both systems deliver good frame rates and have good, easy-to-use multiplayer setups that most closely resemble Halo 2 and 3's party system and matchmaking playlists. The PC version of the game uses a more traditional server browser to get you into games. Both systems work just fine on their respective platforms. The PC version has the ability to run in a higher resolution, if you're equipped with a PC that can handle it, but it seems to scale quite well. You can also create servers that allow up to 32 players to play at once on the PC, as opposed to a limit of 18 in the console versions, but given the size of the multiplayer maps, putting 32 players in them makes things a little too crowded. Despite listing 1080p support on the back of the box, COD 4 appears to prefer 720p on the PlayStation 3. The only way to get it to run in 1080p is to tell your PS3 that your TV doesn't support 720p or 1080i, but the difference seems minor. Either way, you'd be hard-pressed to tell it apart from its Xbox 360 counterpart. And all versions control just fine, making the decision over which version to buy totally dependent on which controller you like the most.

It's a shame that the single-player is so brief, but you should only skip out on Call of Duty 4 if you're the sort of person who doesn't appreciate great first-person shooter multiplayer. The quality of the content in the campaign is totally top-shelf, and the multiplayer is some of the best around, making this a truly superb package. 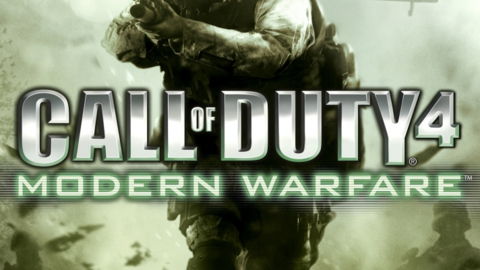 The venerable Call of Duty series leaves its familiar WWII battlefields behind to tackle warfare in a modern setting.

9.2
Sign In to rate Call of Duty 4: Modern Warfare