The fluffy pastel-candy aesthetic and charming setting of Calico is soured by simplistic gameplay.

I was quite a young girl when I first got interested in video games. It was something of an awkward transition. At the time, games were largely considered "boy toys," so moving from typical "girly" things like princess dolls and My Little Ponies into gaming was jarring at times, especially since not a lot of games catered to the cute, colorful things I’d been enjoying at playtime to that point. Sure, I loved the fantasy worlds of Mario and Sonic, but I also wished there was a fun gaming playspace for me that echoed the fluffy-cats-and-rainbow-unicorns aesthetic of my Lisa Frank Trapper Keepers.

Had my third-grade self seen Calico, an open-world animal cafe and social interaction game, she would have lost her mind. Calico embraces an aesthetic and theme that is shamelessly, unabashedly girly in the best ways--a world of happy magical girls living in pastel-colored lands with fluffy, cotton-candy trees where all kinds of lovable animals roam freely. But while Calico's concept and visuals are a delight, the simplistic, bug-ridden gameplay dragged me kicking and screaming out of the childhood fantasy world I so wanted to exist in.

Calico starts off with your created player character inheriting a cat cafe in a faraway world where magic is very real and a part of everyday living. Your job is to fill your little cafe with animals, decorations, and cute kitty-themed pastries while exploring the world and helping your new friends with various errands. It’s a very laid-back, play-as-you-please experience in the vein of other life-sim games, but with an air of play and fairy magic baked in: You can buy potions with funny effects to use on yourself and your animal friends, like shrinking down to mini-size to cook, zooming around while riding on giant red pandas and bunnies, decorating your house with clouds, flowers, and cat paws, and collecting basically any animal in the game (that isn’t already someone else's pet) to be a part of your cafe or your traveling posse.

You’ll meet plenty of new faces as the game progresses, including potion-making witches, nature-loving flower friends, and even a few furry human/animal hybrid folk. Many of them will ask you for help with various minor problems, like rounding up animals or baking a specific treat to give to a pal, and will reward you with money, fashion, furniture, and recipes for the cafe. You won’t find anything in the way of conflict or combat here--the worst that happens is some characters feel awkward talking to each other and need you as a go-between. At certain points, you’ll need to open up a new section of the world, which involves completing a specific quest chain, in order to progress further.

It's a very basic gameplay loop, but also Calico’s biggest problem: It's very simplistic. If you're expecting even a basic cafe-running simulation, you’ll be sorely disappointed, as there's very little you actually do with the cafe besides set up furniture and sometimes bake things. You mostly run errands and finish simple quests until the ability to unlock the next area opens up, then repeat the process. There’s a decent amount you can do outside of this--there are lots of toys you can use to play with animals, fashion items to collect and wear, and creatures to find and archive in your notebook--but it starts to wear thin fairly quickly, especially because rewards feel so sparse. There aren't many surprises; you won't be given spontaneous gifts or hear random weird conversations like in Animal Crossing, and there’s rarely incentive to improve the cafe or run it well beyond the occasional request from a friend for a specific animal or decoration.

Calico is also plagued with numerous bugs. While things like clipping and funny movement of characters or animal friends are forgivable, Calico has a fair few disruptive bugs that can ruin the game flow and, at worst, require a restart. During play, I've found myself getting trapped inside objects, starting conversations with characters that end abruptly for no apparent reason, and even get tasked with questlines that I shouldn’t be able to because the area in question isn't open yet. It’s also worth noting that the Switch version runs quite poorly in comparison to the PC version: I played both, and eventually had to move to PC because the choppy frame rate and visual hiccups in the Switch version became a literal headache.

My eight-year-old self would have absolutely loved Calico to bits, I'm sure. Unfortunately, I am no longer a wide-eyed, curious 8-year-old girl--I'm a game reviewer whose tolerance for bugs and simplistic gameplay has worn thin over the decades. As much as I wish I could view Calico through the eyes of an imaginative youngster, I can't. Perhaps if you are better at embracing your childlike fantasies, you may be able to overlook Calico's many flaws and appreciate its imaginative, fairy-dust-sprinkled charm, but I feel that the magic will wear thin quite quickly. 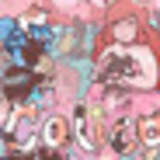 Heidi played both the PC and the Switch versions of Calico for this review. Her favorite piece of Calico fashion is the deer antlers, which pair well with the crazy galaxy-nebula hair color potion.