While the selection of gambling titles on the Dreamcast is slim in comparison to the PlayStation or the PC, the best bet for all involved would be to take your chips elsewhere.

Much like mah-jongg games, gambling games are produced by the truckload. They tend to be adequate because they simply reproduce the mechanics of their real-world counterparts, and developers tend to add very little to their depth, which makes it difficult to differentiate one gambling title from the other. Caesar's Palace 2000 tries to enhance the experience by adding bells and whistles to the gambling experience, but ultimately it comes up short in every department.

The game is laid out with four different gaming sections and a virtual ATM. Each gaming area contains several different games: You can play craps or roulette in table games; blackjack, pai gow poker, and casino war in card games; a handful of one-armed bandits under slot machines; and several video poker variants under video games. Each game has several different betting limits, and, in an attempt to add a role-playing element to the game, you can only access the higher-limit games by playing the low-limit games for extended periods of time. In addition, you are given a bankroll of $2,000 with which to start - though, unlike in the real world, if your bankroll runs out, you can just go to the virtual ATM and take out another virtual $2,000. This not only removes all incentive to play conservatively and build your bankroll, but it also allows for game after game of high-risk gambling with no consequences. After all, even virtual money holds a certain amount of value if the supply is limited.

The weight of a card- or a table-game simulator rests heavily on the quality and accuracy of the simulation, and while Caesar's Palace 2000 does a capable job of simulating the games in question, the lackluster presentation and unintuitive interface detract from the games greatly. The card and table games consist of a table surrounded by a black void, and a shoddy-looking pair of FMV dealer hands, accompanied by disconnected dealer voices, handle the action. There is no casino atmosphere - no fellow gamblers, no cocktail waitresses. The cards at the card games are too small to see their value as they're dealt, and it is also difficult to see the value of the dice on the craps table. The slots and video games are equally uninspired and simply fill the screen with the machine interface. Also, anyone who's spent any time in a casino lately can tell you that the slot machines have become an incredibly involved venture, with unusual themes, multiple betting options, and a variety of minigames. The slot machines in Caesar's Palace 2000 fail to represent this and instead look like slot machines that were made 15 years ago. The interface doesn't add much to the game's case, as it requires an excessive amount of controller action simply to place your bet or change your ante. This sloppy interface slows the usually fast-paced action of games like craps or blackjack to a crawl and takes away a good deal of the fun.

The game also includes a handful of in-game tips in a halfhearted attempt to make a better gambler out of you. If you are unfamiliar with the complex workings of games such as craps, these tips don't provide enough depth and explanation to be of any help but, instead, add confusing jargon to an already intimidating game. If you already know how to play the games, these tips alternate between useless and condescending.

In the end, Caesar's Palace 2000 is a shoddy casino game and only rides the franchise name without making virtual use of it in the game. While the selection of gambling titles on the Dreamcast is slim in comparison to the PlayStation or the PC, the best bet for all involved would be to take your chips elsewhere. 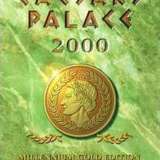